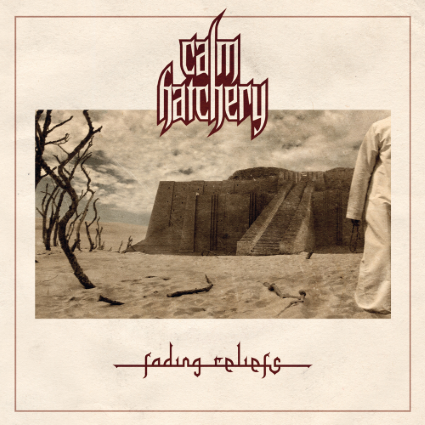 Calm Hatchery has a tendency to 'undersell' itself based on its choice of cover imagery, first with its excellent 2004 debut album El-Alamein and now with the third full-length Fading Reliefs. Don't mistake me: the choice of color palette and photograph does indeed complement the Eastern sounds present through the disc, but your average grave monger perusing the racks for either the newest, vibrantly graphic brutal death disc or old school throwback might pass this one by just on its looks. Which would be a mistake, since this is by far one of the most consistent Polish death metal albums, and while placed well below the trinity of Behemoth, Vader and Decapitated in terms of overall popularity, they can often rival any of those names when it comes to sheer riff sculpture, personality and sum musical capabilities. That they've not created bigger waves I can only attribute to the international saturation of the genre, but trust me, folks, along with Lost Soul, they represent one of Poland's mightiest, and Fading Reliefs continues that high level of songwriting consistency. The 4-6 years between albums are well spent.

This might not be their best material yet, but it's for sure their most interesting, as they've dialed up those aforementioned Eastern folk influences to include not only a slew of well-executed chants and mantras to back up the predictably guttural barking, but also for some pretty amazing arrangements of cleaner, acrobatic strings as in the intro to "Blessing Mantra". This stuff flow seamlessly into and out of their surgical percussion and riffing progression palette, which essentially scours the annals of bands like Deicide and mid 90s Morbid Angel and then gives them a more clinical spin with these excellent, pinpoint harmonies across the two rhythm guitars. The punctuation of each pattern and fluidity of performance is easily the equal of any on the Polish scene (similar to Hate but much better on average), and yet I also feel like they could have an enormous appeal to fans of the current Californian craze, where a lot of bands have this same balance of technicality and memorable composition. But that exotic mysticism and Middle Eastern ethnic charisma in many of the arching riffs and gorgeous leads also leads me to believe they serve as a proxy for Nile with a lot less of the hit-or-miss turbulence and occasionally blander guitar work that band exudes in its quest to be the darkest and fastest band to ever hail from the East US.

The eight new originals here are simply stunning, busy and compelling. While I can't cite that the licks they rupture are wholly original, the way they position particular rhythm structures comes across like they are at least trying to be, and Fading Reliefs hits that 'special place' between retro obsession and modernity that I like to dub 'real death metal', although to these Poles, nostalgia dwells more in the influence of works like Legion or Covenant than Scream Bloody Gore and Left Hand Path. Once again, I am bludgeoned by the realization that Calm Hatchery is such an unknown, but equipped to write and perform at this level, and have painfully few complaints here. The bass could be a little louder, but it's good anyway; and I didn't care much for the one track that was included twice (the second version in Polish), since it sort of sours the momentum of the album (but it's just meant as a tacked on bonus for their local fans anyway, so no real harm). Anyway, fucking awesome record, with excellent drumming, excellent guitars, and enough depth to cycle through a half dozen spins without anything blending together to the point that you'd become exhausted on it. Buy this, buy everything they've done, and let's get some of these deserving stalwarts of the dead a little more spotlight...even if it would be difficult to make out in the blinding desert sun which inspires them.