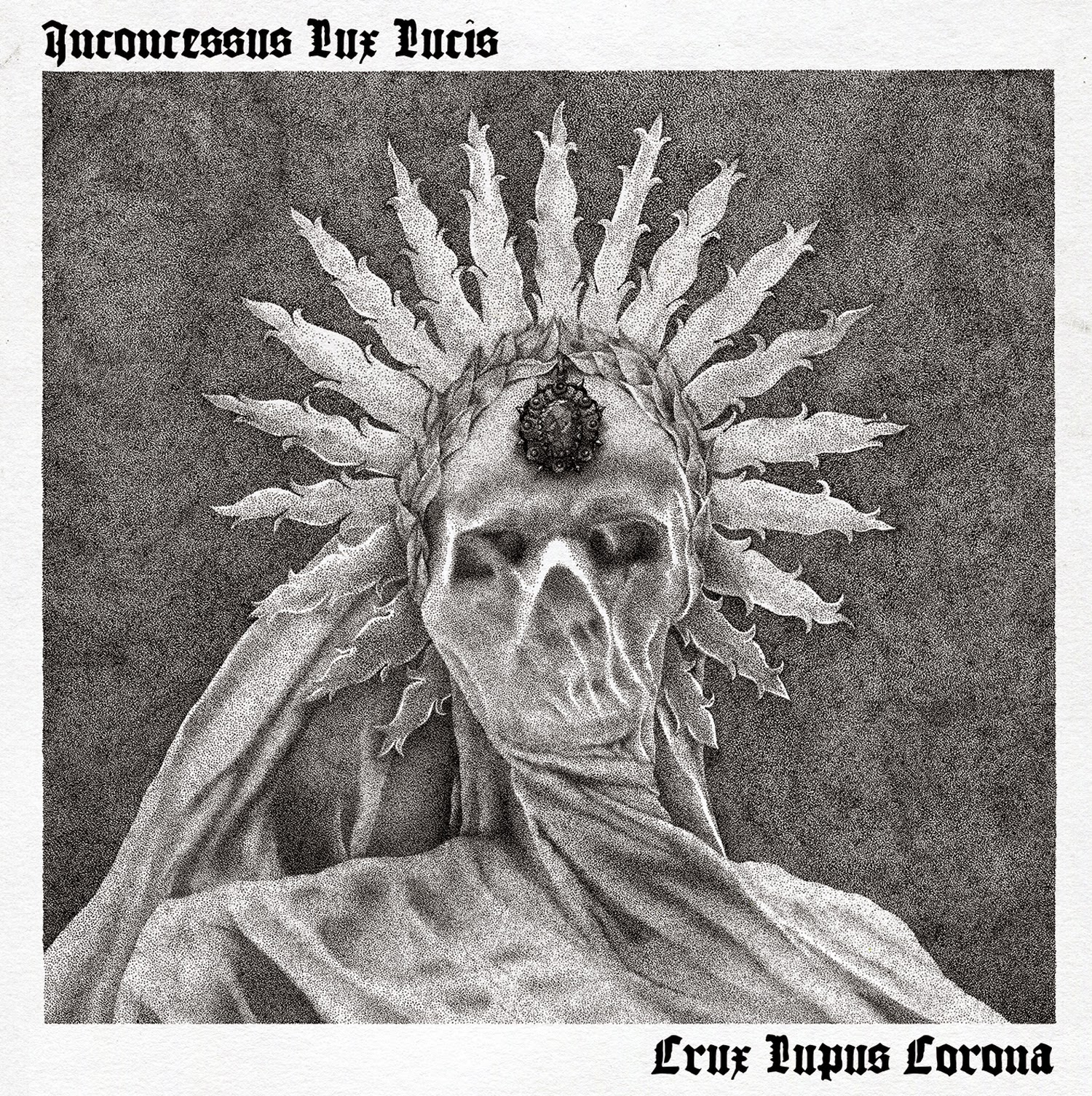 I've grown increasingly keen on those black metal bands these past few year who have opened the floodgates for a sort of 'trad metal' revival when it comes to riffing choices, threads of melody and variation that simply do not exist when it comes to most of the atypical Scandinavian-blast aesthetics which so much of the genre can't seem to grow beyond...and maybe it doesn't have to, but the existence of works by Negative Plane, Funereal Presence, Head of the Demon, Hail Spirit Noir, and the latest records by veterans Zemial and Pest (Sweden) have all grown legs for me, and as soon as I started listening through Crux Lupus Corona I recognized a kindred spirit, albeit one who spins the technique into their own distinct flavor. Looking at just the cover art, with all its Latin, I was not at all expecting what I ended up hearing, and now realizing that I've missed an entire full-length earlier this year, you can bet my next action will be to track it down...

Synopsis: raw, fuzzed out guitars playing with a mixture of involved, folk inflected Euro melodies and more Eastern-themed embellishments, dowsed in the gnarled rasp we so often associate within the raw black metal medium (in particular I was getting Nocturno Culto vibes, but bloodier in many spots, maybe a little Famine too). Tunes are kept rather tight at about 5 minutes, rather than running off the tracks entirely, and they're varied up with breaks in the percussion over which the band spouts a more atmospheric mesh of dirty to clean vocals. The bass lines aren't the most corrosive, but they are voluminous, constantly ascending, descending and generally strutting their stuff interestingly enough that I'd probably enjoy hearing them without any of the other instruments involved; though they contrast wonderfully with the hustle of the guitars. The drums are peppy, loose, and with a lot of clank and crash at precisely the right moments where they would heighten their impact. Riffs are like this mesmerizing labyrinth of scales and melodies, but occasionally they'll bust out an old school, tinny blasted sequence where they fragment off into the dissonance and dark drama of the parent genre (as in "Crux"). The performance is quality all around, and simply more interesting than the lions share of their peers who have stuck to the same predictable patterns circa Norway and Sweden in the mid 90s.

If I were to go out on a limb I'd brand this a combination of 21st century Darkthrone with the first few albums by the Lord Weird Slough Feg, and yes, this is as fantastic as that sounds. A lot of charisma being distributed over only about 17 minutes of music, yet structurally consistent to the extent that I couldn't choose one track over the other as a favorite. The riffing feels inventive simply by nature of its volition to shuck the trends that might otherwise confine it; not that they're coming up with their own scales or theory but just entertaining the idea of something , with almost all the atmosphere created in the various guitar effects that crop up, plus that fundamental contrast of filth and eloquence concocted through the selected rhythm tone and stylish execution. These two Englishmen have themselves a wonderful sound here that I can only hope they take even further...the duration of the recording provides possibly its only restrictions, because you definitely feel like if they opened this all up another 30 minutes you'd be getting an even broader palette of tempo and experimentation, possibly even with more exotic instruments. Anyway, this is easily recommended to fans of Peste Noire, Lugubrum, or really any of the bands I've mentioned in the first 'graph.