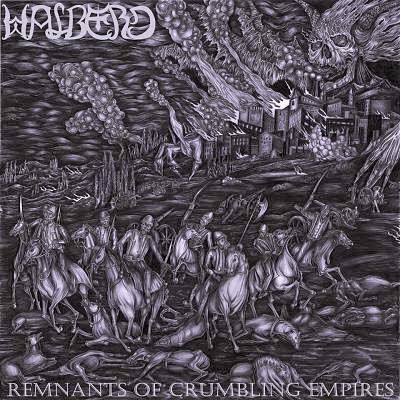 It would be challenging enough to put together an album the quality of Remnants of Crumbling Empires while standing in the same room as one another; yet Halberd have accomplished this across at least three continents. An international band formed on the forums of the world's largest metal database, whose constituents somehow unified their visions enough to manufacture what is hands down one of the most memorable (and least boring) death/doom hybrids I've heard lately, by adhering to an important philosophy: that the strength of this niche comes chiefly through riffing and atmosphere, rather than the lamentably monotonous drudging and 'oh we're so fuckin' heavy' guitar tone which seems to delude a lot of listeners into thinking every single sludge, doom and drone band sailing across the information highway is somehow genius for stringing along a number of contrived, derived chords at a crawl.

Dynamics. Halberd has them, and the fact that they never settle snugly into just one glacial pace or progression is critical not only to the album's flow, but the impression it leaves upon the audience. Just as much of a pure, late 80s death metal effort as its more prominent mating of styles, the band will break out into resonant tremolo picked patterns whose melodic inclinations reminded me (in a positive way) of the Entombed debut, but overall the churning and grinding of the rhythm guitars feels like it traces its lineage back to British legends Bolt Thrower, Napalm Death, perhaps even older Godflesh if we were to eschew the industrial instrumentation and just go with the riffing alone. Remnants of Crumbling Empires is essentially this cocktail of classic death metal tropes circa England, Finland, Sweden and Florida, shaken and stirred and served from the gut with an infusion of eerie keys that lend the experience an even more ominous, exotic presence like you might remember from a record like Celtic Frost's To Mega Therion. In fact, I've seen the band compared to Tom G. Warrior's latest incarnation Triptykon, but as a rare person who finds that band high on production values but bland on riff quality, I came away from Halberd with more of a Hooded Menace impression, sans the kitschy horror lyrics and titles. Which brings me to the next point...

Theme. Halberd is war metal, not in the genre sense that they sound like Blasphemy or Bestial Warlust, but through the lyrics and atmosphere. The band has a designated lyricist who pens these passionate odes to historical conflicts which are just not often enough thought about in metal music, and this was easily one of my favorite characteristics of the album. The Proskurov Pogroms in the earlier 20th century Ukraine, the Anglo-Zanzibar war of 1896, and the Boer Wars a few years after that, and not just written as a detached social studies lesson, but imbued with impassioned imagery that often puts the listener/reader right into the middle of the fray. This not only gives perspective to the album title, but also provides an entire other dimension of enjoyment that you wouldn't get from just another 'woe is me', vapid inscription of lily-white skinned lost lovers and tombstones that you'd expect from a lot of death/doom bands toeing the (My Dying Bride) line. As a prolific listener of metal, so often inundated with the same topics ad nauseam, I appreciated this, and the music reflects the subject matter well...faster sequences feel like your flesh is being ground up by pre-WWI artillery, and the slower, atmospheric passages feel like wraiths haunting the shadowy afterlife eaves of a battlefield.

The drums are programmed, which might prove an obstacle to purists, but not at all for me, since they keep themselves very busy, pregnant with fills and breaks in any mechanical monotony one might perceive. Vocals are divided into three tent camps: a deeper guttural, a bloodier Carcass-like rasp and then a few rare Warrior 'hoomph' exclamations that help usher in some excitement for a new riff switch. Even better, they don't skimp on the leads and melodies...Remnants if flooded with the things, so at any moment you're thinking some riff might feel a little too pedestrian or predictable, in comes this wild and furious relish. There's even a little bit of structural experimentation, particularly the slow and sparse chugged pacing found chunks of "Ignorance of Morbidity" where they let the cleaner guitars and dissonant ambiance glide alongside the gruesome growls (one of the Godflesh moments I hinted at earlier). The mix of the record isn't particularly grating or raw, but it's not clean and spiffy either, so it ends up with a sort of timeless quality about it that works hand in hand with the musical aesthetics on parade.

Few complaints, honestly...the bass guitars are not exactly obscured, but could certainly be a lot more interesting than they are for the vast majority of the album. I'm guessing there wasn't a devoted bass player when they put this together, and to be fair, a lot of older death metal records which inspired this one weren't bass heavy; yet there were points through the music in which a nice, unique groove could have been established alongside or even counter to the rhythm guitars. Also, I don't know that the longer of the four tracks (12 and 15 minutes respectively) benefited that much from their duration. Halberd compensated by keeping them kinetic, instead of endlessly recycling static chord patterns, but I really thought their style worked best in the 5-8 range, where they just roll over you like a horse-drawn cannon. These are minor issues, though, even more so when you consider the difficulties they must have faced in putting everything together without that physical proximity most bands have. On the whole, this is an excellent debut, never too derivative of any one source, and the leads, lyrics and hellish vitality of the rhythm guitar patterns are all immense. This should not be an unsigned act for very long.