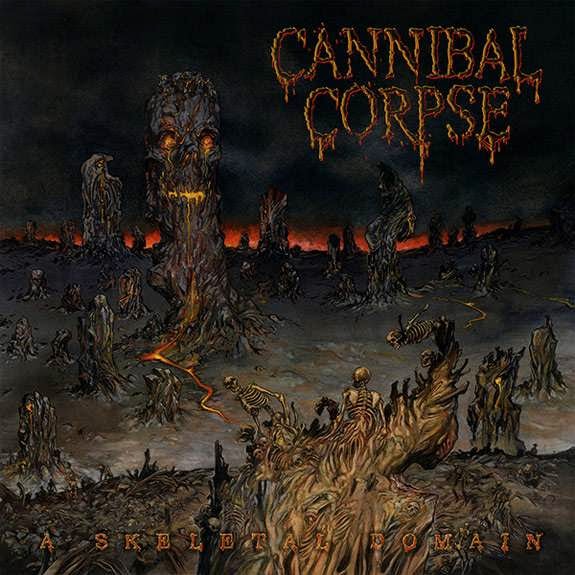 'All their albums sound the same.' 'This band is so stagnant, I haven't been able to stand them since The Bleeding'. Yeah, sure, buddy, keep telling yourself that (but not applying the same logic to most of your other favorite bands), while I continue to enjoy one of the most consistently energized and entertaining streaks in all of death metaldom. Cannibal Corpse have produced what comes as no surprise to me: another great record in a long line of hits, with precious few misses, maintaining that median between elder death metal statesmanship and the dawn of brutality which would launch a million other bands to clean up their trail of carnage. Now, to be fair, I had read some misleading press in advance of the album's release which hinted that this album be different than those before it, which isn't necessarily true, but that's not to say A Skeletal Domain is a carbon copy of Torture or Bloodthirst or any of their other milestones...

It brings a little more visceral excitement than last time around, a little more violence at a faster clip and a lot more of Cannibal's death/thrash roots seem to have loosened in the earth and sprouted up around the sturdier quarter-century death metal trunk. While Torture seemed to be a slightly dialed back level of complexity to the decade of releases before it, A Skeletal Domain is more breakneck and threatening and definitely cranks up the velocity, to the point that some of the quicker guitar licks in cuts like "Sadistic Embodiment" seem to harbor a blitz of Teutonic speed/thrash, something I can't recall picking out very often from their earlier material. Of course, a lot of this is due to the production, which is perhaps as polished and immaculate as any other point in their career, and allows for the rhythm guitars to carve up a more clinical slab of meat than on some of their past splatter-platters, but there is just a fraction of deviation from where they were at a few years ago, enough variation that it doesn't come across too redundant to my ears...but I admit some bias, since it's rare that I come away from anything this band releases with any semblance of disappointment. They have almost always proven damned good at what they do, and even if this isn't likely to be a favorite in their discography, it certainly didn't slip past the Q.C. division when the master was shipped off to press.

Expect all the hallmarks of the Cannibal Corpse sound: Alex Webster's judicious exhibition of finger strength weaving webs of bass-lines all over the fucking steel-shaving rhythm guitars, which are performed with such surgical precision this time around that half the time I thought I was listening to a more brutal Nevermore during the faster picked, thrash-like progressions, though the slower chugs totally punch the listener in and through the gut region in mid-paced sequences. They still do a lot of those atmosphere octave chord placements circa their later 90s work, and George Corpsegrinder's syllabic patterns are more or less par for the course, but I was happy that they also left some space here for some simpler riffs that border on the atmospheric, evil moments they hinted at with records like Gallery of Suicide and Bloodthirst. I feel like this album might also be a chance to put to rest the complaints about Paul's drumming...not that I understand what these were ever about, since he's usually been pretty good, but the man is hitting like a tornado here, and even if they're not the most technical band in terms of blasting, his kit at least makes you feel like your head is being battered around with a club.

The lyrics are good as usual, psalms of psychotic murder which don't deviate from the norm...the one thing is that they seem to have lost their luster for really funny/disturbing song titles.."High Velocity Impact Spatter" and "Headlong Into Carnage" are alright, but any sense of 'shock value' seems to have been left way behind in the mid 90s. But this isn't exactly news, nor is it necessarily a flaw that upon their 13th album, the subject matter has taken on a more workmanlike character due to the gradual jadedness of the audience (myself included). At the end of the day, while I was probably the least impressed here that I had been since The Wretched Spawn a decade past, I don't feel let down or like I've wasted my money in the slightest. There's not even an outside chance that this is really going to change the minds of those long exhausted with the Cannibal aesthetics, but taken at face value, which all albums really should be, it's a hell of a beatdown that will remain enjoyable for months.