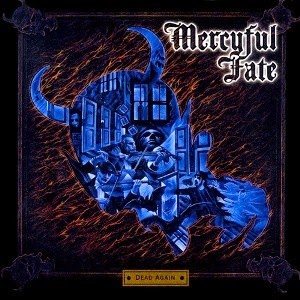 Much as The Graveyard proved the nadir to all those things King Diamond, an uninspired and pitifully bland paragon of career exhaustion, so too does Dead Again prove for the King's off and on alma mater Mercyful Fate. Now, to be clear, this is nowhere near as bad as The Graveyard, an album I have actually had physical altercations with, broken up only when the authorities arrived and took us both away in handcuffs. Dead Again does have a handful of choice moments, scattered throughout the track list, but even those sometimes sound like partial retreads of ideas the guitarists had pretty much perfected in the past. The best I could say for this work as a whole is that it's a competent, high 'average', but it marked a clear declination in the quality of the Danes' musical ideas, part of which I'd attribute to the front man having been so busy for just so long, kicking ass I might add. In the Shadows was a superb comeback, Time was still quite memorable, Into the Unknown solid, and then whoosh...the steam ran out (thankfully not for the followup to this).

The riffing progressions were still distinctly Shermann/Wead, with a huge emphasis on groovier patterns as heard in cuts like "Torture (1629)", "The Night" and "Crossroads". Personally I found the guitar tone and production of Dead Again in general to be solid, a little on the dry side but fully evocative of those moonlit, classy horror aesthetics that the King had always invested himself into with both bands. The producer here was involved with In the Shadows, and King did a lot of the mixing himself, so it's not a coincidence that this is thematically and atmospherically a spiritual successor to the 1993 reunion epic, with a lot of those grooves that just storm in and cut out against the lighter material ("Since Forever", etc). The problem for me is just that the songs lack the extra, intangible 'something' which made for such a hot streak from the time Don't Break the Oath had arrived all the way to efforts like Time and The Spider's Lullabye. It's not an ineffably lazy round of tunes like one will find on the painfully sterile Graveyard, which had a mix like a Tupperware party in Prude county, but for whatever reason the songs just don't connect with me quite like most of the albums that were released before it.

Sharlee D'Angelo's performance here is solid in tone but rather forgettable, I often feel like a few more interesting grooves in his own playing might have supplemented the rhythm guitars with the 'edge' I needed to carve them into my memory. The leads are in general pretty bleak, you can perceive all the shredding and technique the guys are capable of meting out, but emotionally the breaks all seem rather phoned in and fit to order the song structures rather than the phantoms and haunts which underscore many of the lyrical themes. The drums sound good, mostly laying out standard hard rock rhythms since a lot of the material is fairly mid-level on the energy and momentum scales. As for Diamond himself, he gives the usual versatile performance, but doesn't seem to imbue a lot of the individual lines and stories with the same level of personality you'd remember from Melissa, or Don't Break the Oath, or even Fatal Portrait. On a technical level, most elements that went into this recording don't sound out of place or digressive from the three full-lengths before it, but once you get beneath the surface it just seems a bit hollow...

Even on the ambitious 14-minute title track, which is a jumbled mesh of mundane progressive rock swells, corny narratives and a few seconds of the most inspired and excellent harmonies to be found here. Others, like "Fear" start off really ripe and then grow progressively less compelling, while a tune like "The Lady Who Cries" is rather a dud that I struggle to remember at all. What I find most curious is that I find King Diamond at its heights and lows to be better and worse than Mercyful Fate. Abigail and The Eye just marginally surpass Don't Breath the Oath in my estimation, though I realize that's not the Officially Approved Opinion™; but on the other hand, records like Give Me Your Soul... and the dreaded Graveyard aren't fit to spit-shine Dead Again's inverted crucifix. So, as gloomy as I might have made my position seem in the opening paragraph, it's a testament to this band, that even the album I'm least likely to appreciate in their catalog, still isn't entirely a drag. In fact, this would make a pretty solid 4-5 track EP if all the better licks and vocal hooks were abridged. But it remains In the Shadows' less attractive younger sister, safe to propose to if you blew it when you were dating the original, but in the back of your mind, you'll always be wondering where that might have led if you just weren't such an asshole... And, yeah, I realize 'sister' is probably a bad choice of words when discussing the Mercyful/Diamond canon.