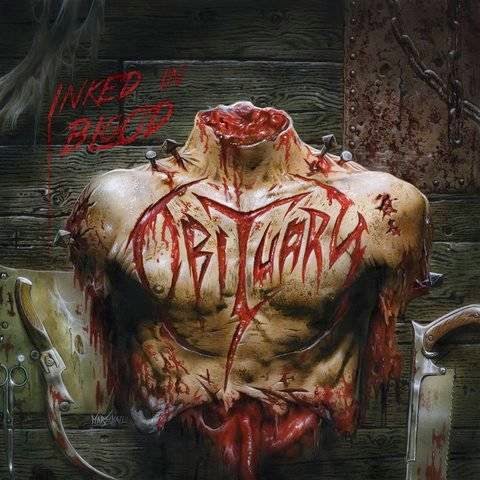 I'm not going to delve too deeply into the controversy and politics behind the creation of this record. Yes, Obituary crowd funded the recording of this and then put it out on a label anyway. Yes, it seems awfully shady that they'd need or want to crowd fund an album in the first place...it's not like some label was going to 'stifle' their creative process...they're fucking Obituary. They might place an ill-advised death/groove metal rap track as a joke on one of their outings, but they're not going to be corralled into sounding like One Direction. If you've signed this band, then you pretty much know what you're getting; and as I have discovered through the actual musical content of Inked in Blood, what you are getting is more of the exact same riffs, grooves and vocal meters that the band has been largely rehashing since their first two, genuine classic albums Slowly We Rot and Cause of Death.

There is absolutely nothing on this new 'comeback' which seems even a fraction out of place, but that's exactly the problem with it: no fucking ambition whatsoever, and that's a tactic that painfully few bands ever pull off or should even be allowed to pull off. Where once this style of dirty, fuzzy, grotesque Floridian death metal reigned supreme for its unabashed primacy and vocal murder, it now seems just so redundant, a tactic playbook of stock rhythm guitars which are ultimately really dry and ineffectual. That's not to fault the production values here...the bass is roiling and loud, the guitars are like having your guts twisted into batter, the drums have a nice, flexible feel somewhere between the acoustic and augmented, and John Tardy can still sound like he's vomiting blood into a microphone, but all of the patterns here have already been mastered by the band long ago, were much catchier back then (tunes like "Body Bag" and "Memories Remain" are still far more memorable than any track on this...), and they don't really add anything new apart from maybe an occasional pair of harmonized chords breaking into or out of a verse or lead ("Visions in My Head", "Violent by Nature"), or a bit of Southern haze over a doomy riff, an ingredient that was likely drafted over from the Tardy Brothers project.

Now, Inked in Blood isn't entirely shit...for those who simply wanted more of the same that they've been getting for decades, but it stuns me that nothing here is even as striking as two of their most catering, accessible 90s tunes like the super-groovy "Don't Care" or the hardcore surge "Threatening Skies". A lot of this is that when it comes to the rhythm guitars, they stick to the same dull chord progressions instead of trying to put together something out of left field, something more evil and sinister. The band has long subsisted on Tardy's gruesome vocals, but the issue there is that they have not felt threatening or compelling themselves in quite some time. Tunes like "Back on Top" and "Visions in My Head" are so banal in the guitar department that they seem as if they took mere seconds to write...most groups could improv this entire album without any difficulty, just take a few of those old Hellhammer groove motifs and render them as unappealing as possible. As a result, Inked in Blood is beyond lazy, too invested in repeating itself of giving 'the fans what they want' which is rarely a good thing if that's the same audience which thought the last album was good.

I feel like in some alternate universe there might have been/still be an Obituary which built upon the morbidity and menace of the first two albums and progressed that into something really creepy, but this band went the opposite direction, trading in the cemetery spade for a pair of gym shoes. The album has no atmosphere, no creativity, no strong writing, not even a fucking song title stands out. If they'd throw some weirder guitars, some dissonance, some vocal effects, anything to vary this up a little it could go a long way towards building upon the band's legacy rather than becoming suffocated by it. Inked in Blood can't necessarily be accused of being terrible, because it's twice the album Frozen in Time was (not saying much). But it's just not enough for a band that has so long enjoyed its status as a death metal legend, and if I'm being honest...there hasn't been 'enough' since I was a teenager. Fun live band, but their studio output is almost perpetually lacking.