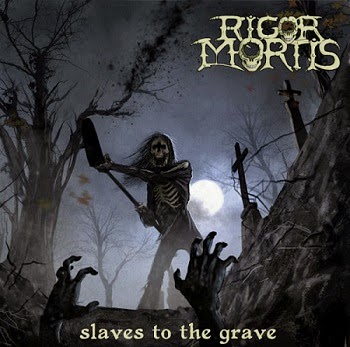 I'm not ashamed to say that Rigor Mortis has always been a bit of a one hit wonder for me...their eponymous debut has remained in my regular rotation for well over a quarter century now. Even if it was never one of my favorites of that early extreme death-thrash wave, placed behind Reign in Blood, Hell Awaits, Darkness Descends, Violent Restitution, Seven Churches, it's still one of those immortal 80s efforts which loses absolutely no luster decades later, I can pop it in and still feel the same shivers and reverence that I did when tossing newspapers into doorways with "Bodily Dismemberment" in my headphones, mullet flapping in the wind, disgruntled as all youth are won to be when they haven't gotten their genitals wet yet or been beaten down by the monotony of the 'real world'. After that, the Texans provided little more than diminishing returns...the Freaks EP striving towards but not living up to the debut, and the Rigor Mortis vs. The Earth another of those innumerable turds clenched out in the 90s by a band attempting to remain relevant against the shitstorms of alternative, hip hop and grunge that were arriving.

Slaves to the Grave was inevitable; when the band returned to active status around 2005 and started touring, you knew they were going to take another shot in the studio just like so many of them do (Coroner, I'm waiting on you), and when that day arrived it was either going to be a disappointment or a triumph. Well, the reality has been bittersweet; with great guitarist Mike Scaccia passing away in 2012, we've got here a self-released, postmortem comeback that marks what I assume will be the permanent dissolution of the band, since his playing was just so natural and crucial to their identity against a whole host of other groups in the late 80s. So Slaves to the Grave becomes more than a reunion album, but one final chainsaw raised aloft to the heavens, revved up and ready to soak in the blood of angels, or at least the horror-buff thrashers who so treasure this band in their collections. One might say there was a little bit of pressure on this to perform, but I could predict in advance that what we'd have here would be another of those countless 'catch up' albums, a band trying to keep pace with its original magnum opus, challenge its own youth, rather than progress forward in any noteworthy fashion...and that is pretty much what results. Which, depending on whom you ask, will prove either money in the bank, or imminent frustration...

I'm leaning towards the former, not that Slaves is in any danger of dethroning the '88 album, but because while so many of the riffing passages feel dead loyal to their classics, they at least try to restructure them enough that the choruses feel fresh. The signature of Rigor Mortis has always been the marriage of Bruce Corbitt's harsh, distempered grunts to Scaccia's fluid, insanely fast tremolo picking style, and that is 100% intact here, leads shredding out with abandon over the dextrous stream of rhythm guitar notes like entrails being introduced to the air during a summer killing. The original rhythm section of Casey Orr and Harden Harrison is likewise intact, with some great, fat, energetic baselines and drumming that caters more towards the thrash/speed metal roots of the band rather than attempting to keep extreme with the times...this isn't going to be something where you could expect ceaseless blasting, but Harrison definitely contributes to the momentum here with some desperate, straight rock beats that fit the riffing components while never skimping on the fills. Corbitt does sound mildly different here, his timbre doesn't really have that creepy graveyard echo so much as on the debut, but rather you can make out more of its visceral quality, like an even more constipated Phil Rind of Sacred Reich, and lots of gang shouts used as punctuation through both verses and choruses. But the real star of this show is Scaccia's lightning stroke...

There are a few beefier thrashing moments which do seem to pay some acknowledgement of their sophomore effort, but end up coming across more like Gwar during their prime (Scumdogs of the Universe style), which makes sense since Corbitt and Brockie had some similarities in their vocal technique, the latter just a lot more theatrical. But I'd also like to point out the one area in which Slaves to the Grave is distinct from its predecessors...the inclusion of horror soundtrack-inspired, bluesy bayou moments in tunes like "Poltergeist" and "Bloodbath" which are extremely well rendered and aesthetically resonant for a band whose inspirations include all manner of Southern Gothic grotesque and slashers...hell, this is the kind of thing that wouldn't have seemed out of place if the band Agony Column had a more prolific career, and what I found so amazing was how well it reflected the cover artwork, and immersed me once more into the imagery I always associated with the Texans as a teenager. Production-wise, it clings to the older aesthetics of pronounced, airy and evil guitars, but the drums and bass feel a little bit more balanced, and the few spaces between the shredding notes seem cleaner...it's the 21st century upgrade to what they could do in the 80s, sans a lot of the frills their core audience might have feared.

The question, then: was it worth it? The 26 year wait after the self-titled cult classic? Slaves to the Grave is no masterpiece, perhaps, and about half of the album can be chalked up to pure nostalgia, obeisance to the template they laid out back then...but there is actually just enough here to feel like it something more than a carbon copy, and that those decades did happen and that these guys did mature and bring in a little of their wealth of experience to the sound of their alma mater reborn.The atmospheric breaks really balance out the faster surges of material (of which there are many), whether they're the bluesier sort or the classical guitar representation of "Sacramentum Gladiatorium". A few of the tunes like "Fragrance of Corpse" are nearly as memorable as a "Wizard of Gore" or "Bodily Dismemberment", and there isn't really a 'bad' song on the album, even if it can't compare on a riff by riff basis, and a few like "Curse of the Draugr" just seems to be hanging in there stylistically, without offering much to the sum value. Ultimately, if not a 'run out and buy this right now' level record, it's the best material they've done since 1988, and oozes self-respect not only for what they had accomplished so many years ago, but what they might have transformed that foundation into had they continued to define this serial slasher subject matter in metallic form. Rest in peace, Mike Scaccia. And rest in pieces, Rigor Mortis, because you know they wouldn't have it any other way.

Verdict: Win [8/10] (all of your nightmares rolled into one)