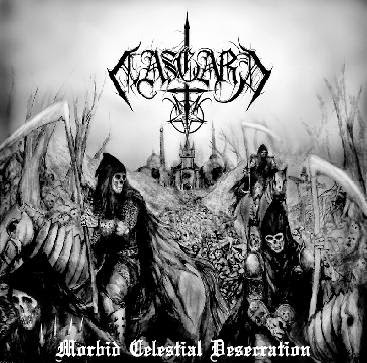 Aasgard has sat silently in the background of the Hellenic black metal scene since their inception, and it's not hard to reason why: the aesthetics they choose to render on their releases are born more of a devotion to the raw, baseline 90s Scandinavian 2nd wave ethos than the more distinguished, glorious, melodic/occult metal woven into the Greek masters Rotting Christ, Varathron, Spectral Lore, and more recently something even further out like Hail Spirit Noir. Theirs is a musical choice which runs not so much off ideas as it does an adherence to a code of sound, a stereotype, and due to that fact, their debut and EPs just never ranked all that highly with me. Competent, yes, and there is certainly an unshaking audience for that old school appeal, borne on wings of nostalgia and loyalty, one I don't actually exempt myself from. But that comes with the condition that the riffs are played with such menace or atmosphere or just raw memorable note construction that I can't resist it, and Aasgard just hasn't foot that bill...

Unfortunately, for a large fraction of Morbid Celestial Desecration, that remains the case. Raw and searing patterns of chords strung out against a melancholic, warlike backdrop where the repetition of the rhythm guitar alone is chiefly responsible for cultivating the atmosphere, all traced back to the obvious sources like Bathory, Mayhem, Gorgoroth, Burzum, Carpathian Forest, Hellhammer or other European legends, without the novelty or charisma. There is marginal crossover appeal for fans of other epic Greek black metal outfits like Nocternity or Macabre Omen, only this duo just doesn't seem to establish that same level of mood...the harsh chord progressions too often feel predictable and rarely go anywhere adventurous, to the point that once they throw in a left hook like the clean guitars sequence in "Beliefs of Native Gods" it automatically shines by default. On the other hand, Aasgard at least varies up the material so that a largely surging, blast-supported piece is followed up by a slower, tortured, depressive black metal number ("Supplication to the Immortals" an example) where there is more emphasis on making the vocal rasp sound like its being pitched at you through a drainage system. But even there, I just kept waiting for something musically compelling to stand forth and it was ever more of the same.

Morbid Celestial Desecration occasionally feels like a record patched together across a number of recording sessions, with the tones slightly altered between guitars and vocal timbres, but while that usually works against such material, here it did provide a distraction and prevent the tunes from growing overly monotonous in succession. I enjoyed the intonation of the chants in the title cut, and other small nuances spread over the 38 minute like the chilling, noisy instrumental "Infernal Virtues". The vocals are generally nasty and well fit to the songcraft. Truthfully, I even felt like the production was stronger and clearer than some of their efforts I've covered in the past, a sign of some maturation. But then the drums feel rather stock, bass lines out to pasture (if they were ever there to begin with, I definitely can't discern them), and so much of the actual riffing uninspired to the point that it sometimes feels like the band itself doesn't really care for them. It's clearly not beyond Aasgard's ken to perform early 90s black metal with the purest intentions, but there is simply not enough weaponry here to compete with hundreds of similar bands who just have a knack for putting riffs together in a way that you'll care what follows them.

That aside, I didn't mind a few spins through this. It's not exactly lazy per se, it does strive for more mood, and its stronger than what I can remember on their last output, but even with this vivacious, hellish-cold contrast mix it seems rather complacently magnetized to the past...static and unable to move forward. That might prove a boon for some black metal listeners who live as anathema to any sort of progression or consistently 'likeable' quality in their music, but even then, that sort of aesthetic antagonism has been better mastered elsewhere.