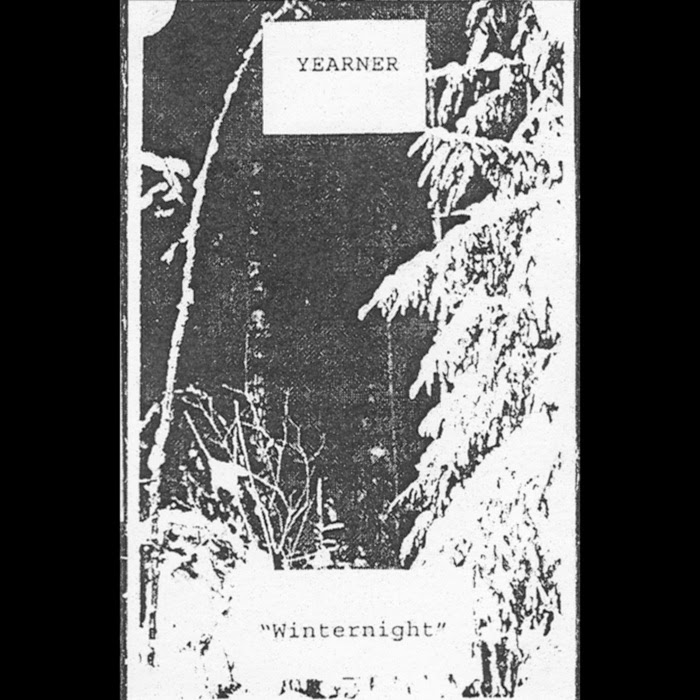 Winternight is all too apt a title for this tape, Yearner being another project in the Voldsom lineup, composed and recorded by musician L.V. But I might have gone even a bit further with that imagery, dubbing it Winter Nights in a Fell Church Buried Beneath the Snows, for this is hands down the most longing and isolated piece of work I've yet encountered from this musician, and my favorite release to date among the Voldsom catalog. Nostalgic, horrific, completely lonely and heavily repressed due to the subdued, submersed production sensibilities that will probably be exponentially more pronounced when you're actually listening to the cassette on an old tape deck (I am listening to this digitally). Proof yet again, that in a world of overdubs, heavily layered orchestration, pop melodies refined to a bleeding edge and/or Pro Tools guitar rock, it's a wonder what a guy can do with a few organ and synthesizer tones and a metric ton of sincerity...

Not all of the tracks on Winternight are uniform in mood, but there is enough linking them together that by the end you've felt like you just wandered through some German Black Forest Odyssey during the snowfalls and lowest temperatures of the year. The organ tones here, especially in a piece like "Silent Nocturnal Snowfall", resonated with me incredibly well, as if Captain Nemo had been forced out of his undersea vessel and made to perform among the evergreens at absolute zero. It's chilling and also evokes a hint of nostalgia for cult Gothic horror films, and to be truthful would not make a bad accompaniment for some silent black & white replete with imagery that someone might have felt was pretty creepy in the earlier 20th century, or even today if they actually have perspective. These passages are played in repetitive waves, joined by antiquated synth tones which would have belonged more to a Tangerine Dream and/or Vangelis, which bring a little more of a Technicolor palette to the atmosphere, like whorls of deep purple or crimson snow erupting over a monochromatic landscape. This is really where the record transforms and transcends beyond the reality of a guy and a keyboard.

But Yearner also disembarks from this motif, with more dissonant, jarring pieces like "Obscurity" which have a more immediate, brooding horror appeal with some electronic pipe-like sounds that really freaked me out, or "In Days of Yore" where the synths feel more saturated and distorted beneath a more glorious melody...it wouldn't be out of place in some dreamy 80s film like Legend. "Winternight" itself has a slightly more Medieval folk/castle feel to it, adding yet another facet to the album's ability to successfully manifest fragments and scenes of the imagination. Combined with the murky, raw mix, all five of its tracks function entirely as intended and were a perfect mood-setter for a few brisk New England nights here in mid-November, though I definitely have the feeling I'll be breaking this out in another month or two repeatedly as I become increasingly surrounded in frigid whites and darkness. At 20 or so minutes, it never wears out its welcome, and probably more than any of the other tapes I've heard from L.V's other projects (Astral Order of Impurity, Til Det Bergens Skygenne, etc), grants a haunted, seasonal escapism.