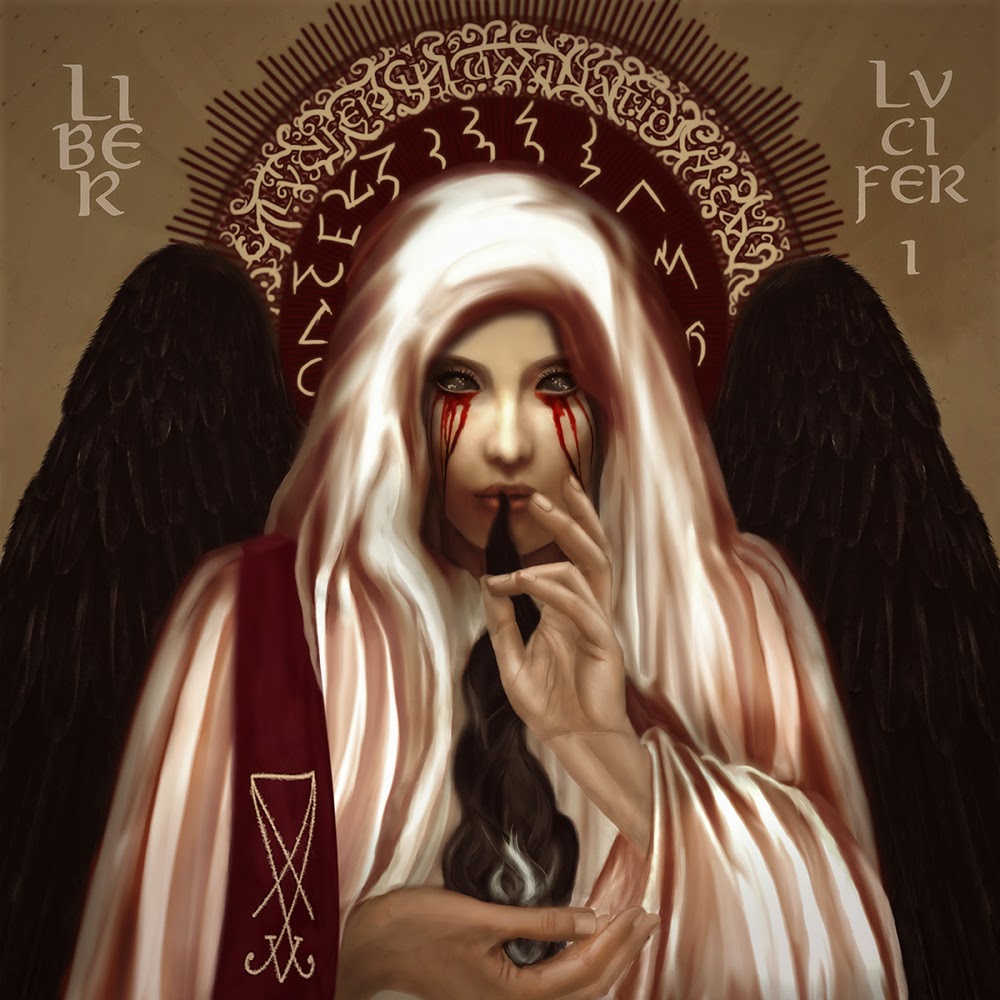 There are precious few bands towing the lines of technicality and progression within the bounds of black metal, traits that make a record like Liber Lvcifer I: Khem Sedjet valuable far beyond the fact that it's just a superbly written, kick-ass exposition into the more clinical side of the medium. But I don't mean to get across that this is simply some soulless exercise in musical proficiency. This is not some wank-fest or shred exposition. No, the key to Thy Darkened Shade's sophomore is that it is just as heavily focused on the band's occult lyrical paradigms, not to mention the delirious level of variation and contrast between the bristling, hyper picked black metal assaults and the layered, atmospheric moments in which the monk-like chant of the clean vocals announces its presence...the album is so good that it throws the band's already-great debut Eternvs Mos, Nex Ritvs off the nearest rooftop to be trampled by the traffic below.

Liber Lvcifer I: Khem Sedjet might not exactly be setting a precedent, since there's an entire history of Scandinavian black metal bands like 1349 and later Emperor with an emphasis for taxing the raw technical levels of the field, but it does the deed just as well if not better than most of those that have come before it. Agile rhythm guitars spitting out spikes of dissonant, eerie melody amidst impressive picking sequences that almost never let up when the pedal is to the metal, accompanied by effortless blasting that keeps the slower to mid-paced passages of the album just as busy with involved double kick patterns and powerful fills that transition seamlessly into the next rush of aggression. Most of the guitars are played with that perfectly lean tone which allows all the notes a presence, and this album more than any other in 2014 has the highest ratio of quality tremolo patterns that force innumerable replays just to confirm what you thought you heard. But that's not the limit of the technique here...the ever prolific Semjaza has his fingers all over that fucking fretboard, like an insane architect who is attempting to disprove the notion that all practical structures have already been built. Even when the brickwork being laid out here isn't all that novel, it's still mindbendingly great...

But the songwriting and guitars are not the only area in which the guy is excelling, he also populates the tunes with a bevy of curving, climactic proggy bass lines that are the equal to almost anyone else in the black metal genre. It's difficult to rationalize how the guy could come up with such intricate and well honed craft within two years of the debut album, so I'm just going to pretend Semjaza has six arms and two or three extra brain chambers. I'm not saying that this is the greatest work of music known to mankind, or that it exhibits such a level of complexity and depth that mere human wisdom cannot interpret it, but you must understand that I receive so much extreme metal in a year's span, and an overwhelming percentage of the stuff doesn't even show a quarter this much effort in its execution, never mind its composition. And the thing is, I kept waiting for it to get boring...for it to become so cluttered with its own ambitions that it stopped engaging anyone other than itself...but it doesn't. Fuck, some of the later tracks like "Deus Absconditus" are among its best and most intense.

78 minutes, and there is ALWAYS something happening that fetches the ear. 10 minutes songs surge past the listener like a rush of sheer revelation. Bored yet? Not a chance. Few blanks are fired, ever, on this album. The polished production levels are never sterile nor superfluous, but rather mandatory to make out everything happening in the mix. Vocalist 'The A' has his work cut out for him, and to be truthful, his guttural ravings, which somewhat supplant the traditional rasp of the style, can't even hope to compare with every other component of the recording. But with all those chants and cleaner vocals throw in for balance, I still really enjoyed the album as a whole. It's not perfect, there might be a few moments inferior to the rest, and it's not the sort of 'catchy' kind of memorable...it's more like an experience you have to find the specific mood for. The frenzy of these ideas, old and new, whirring past like papal hornets into an abyss of their suppressed sins. Unfuckingbelievably good.