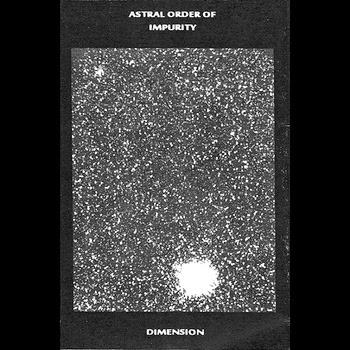 One risk that ambient artists face is that their recordings can often become so samey, so redundant that it feels like one or two ideas are being chopped up into a number of slices and then fed to the listener individually in lieu of offering a more fulfilled, variegated experience. One might immediately gaze upon the cover art to the tapes of Astral Order of Impurity, hear a few select moments of the pads and effects the creator has implemented, and decide that there isn't a whole lot of difference between them. One might not always be wrong in that assumption, not even when comparing and contrasting Dimension with its predecessor Portal. However, those differences DO exist, and not always in the most subtle of contexts.

Dimension is a more cathartic experience than the prior tape, with a greater intrusion of dissonant noises and effects that inhabits its depths and become immediately more alarming, while the usual background tones themselves become even more innately alien and frightening. This is not always the case, and there are indeed a few lighter points in the first half of the 41 minute track which were crucial in setting this one up as an almost more asymmetrical 'cinematic' recording. A few hints of weirdness abound, but it all takes a slightly darker, more chaotic turn as you reach past the 20-25 minute zone, after a more ominous, subdued middle section with some subtle electronic or radio signals rattling off against the swelling background...I thought I even heard something like a guitar distortion pop into one ear, but I often lose my mind when I become so embroiled in a record like this that it wouldn't surprise me if my own mind was casting shadows. But, lo and behold, just like the alien bursts out of the victim's chest, or the space heroes realize that planet they just landed on is not actually a planet, or that the void is just in general not a friendly place...this one grows a little more haunting and fucked up, and it really pays off in the listener's emotions.

Again, material like this is the Anti-Beat. It's not going to get you laid, and if it does, well you've found yourself a keeper...either that, or someone who is going to probably kill you in your sleep (one eye open, friend, one eye open). It eschews the conventional structure of rock or even classical music instrumentation to more directly mimic the sounds of open space, technological equipment or even just what a human brain might 'think' it is hearing. You're not straining for the next harmony here, you're just dreading what might be around the next corner of a derelict extraterrestrial space-craft. L.V., the sole craftsman on this recording, is channeling his own trepidations of the unknown onto cassette, for a few brave souls to witness themselves. But the funny thing, people, is that this is ALL around you, always has been, and always will be. Stop to listen for a few seconds, ignoring the wagging of tongues, the invasive ring-tones, the grinding of construction equipment on every urban corner, and you may just hear it. Or, better yet, just let Astral Order of the Impurity do the work for you. Dimension is the music of Infinity, filtered through one consciousness trying to translate it into pure aural emotion. It's the better of the two Astral Order tapes I've listened through, by a small margin, granted, but it's at once both more sublime and horrifying.