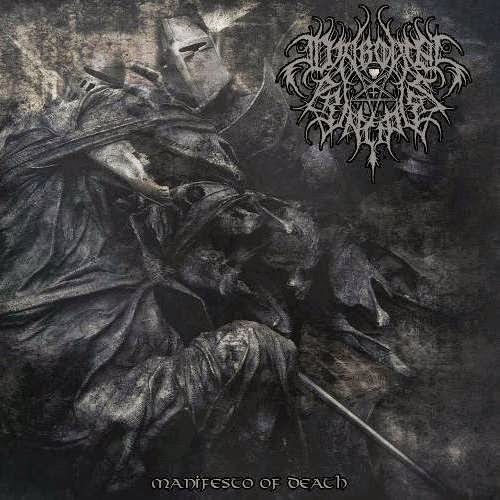 Diabolical Principles went largely unnoticed on their first album, Beyond the Horizon, which was a solid slab of semi-symphonic black metal that possessed at least some hints at greatness, but at the same time did not distinguish itself as much or as often as a number of the band's Hellenic forebears and contemporaries, so it wound up in the slush pile of so many European bands chasing the dream that was already captured and flogged nearly to death in the 1990s. However, it deserved better, and the group remained semi active in the intervening years it took to present their sophomore, Manifesto of Death, which is out through Kristallblut Records of Germany, a relatively new imprint with a couple years behind it.

Unfortunately, Manifesto of Death just doesn't come across as if a half-decade of inspiration was dispensed in its creation, and suffers from a series of fairly banal chord progressions and tremolo picked melodies that wind around on themselves without ever escaping into an exciting, memorable string of notes. The style hasn't exactly changed...they specialize in mid-paced black metal which feels like a mash up of the 90s tradition of Northern Europe with a few of the grandiose harmonic elements attributed to countrymen like Rotting Christ (especially Thy Mighty Contract-era), but the problem here is that the songs rarely seem to proceed in a compelling direction. They'll cut out most of the percussion and insert some more contemplative passage, but then when the full band picks back up it just doesn't capitalize on any inertia that it might have benefited from. Performances are all around solid, and I liked the fluid, audible bass playing which gave a richness to the mix of the disc, and yet it's just not enough to cultivate a 'second rate at best' vibe even at its most prized moments.

That's not to say it's entirely void of variation, since the band wisely switches up the tempo from mid-paced romps bristling with more dissonant chords, to majestic river-flow tempos and then the requisite blasting passages. The down side is that the uninspired feeling to the record seems to be equally distributed among all three. The rasping voice of the vocalist is really average, with no syllabic patterns of note and not a lot of menace by the obvious atonality of its nature in this genre. Lyrics are adequate for the style, but half a string of cliched lines you've read elsewhere. Some of the weird synth tones used in tunes like "The Passage" carry a retro-futurist sensibility that, while not uncommon in cheesy earlier black metal/ambient, don't do much of a service to the narrative of fell glory that the guitar progressions strive towards. But on the other hand, when the Principles are aligned strictly with creating a haunting soundscape, as in "Cosmic Void", I think they're pretty successful at conjuring a dark ambient immersion, to the point that I wished for more of that and less of the predictable rhythm guitars.

On the whole, not a terrible record, but what might have been a chance at taking the promising foundations of their debut into a new realm of possibility, has instead sputtered out like a dead engine churning recycled fumes and tropes that simply cannot survive against the wealth of better execution or more innovative ideas found in the genre as a whole. I didn't feel as if the Greeks had rewritten the script of Beyond the Horizon, but that album was just superior in its execution. If you're just looking to fill the background space with any old slightly atmospheric black metal, then Manifesto of Death should suffice, and again, I liked their synth-ambient future-scape stuff when it goes on a solitaire sojourn, but the album does suffer from an obligatory feeling, as if the musicians were not incredibly inspired themselves when putting it together. Not lazy, but not sufficiently passionate either.