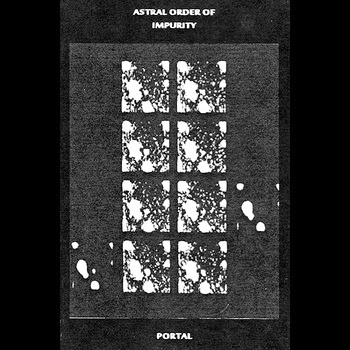 I've listened to hundreds of musical genres across my decades, but one that always strikes me as the most personal is ambient. And when I say 'personal', I'm not referring to the schmaltziness of romantic pop and rock lyrics, nor how most of the drones feel they can 'relate' towards their Taylor Swift records. No, the undiluted practice of raw musical expression in a niche that hasn't been cool ever, isn't cool now, and if the stars are right will never, EVER, become 'cool', tainted or passe. Labels like the German imprint Voldsom are so underground that the devil himself might give you a blank stare when you ask him where to find them, but we have the Internet now, and no need to rely on His bad direction sense any further, though his fashion sense will never go out of style.

Speaking of directions, Astral Order of Impurity depends on only one. Up, up, and away, unto the weightless distortion of space and time. Gravity be damned. Gravitas, on the other hand, paramount. One of the more recent projects of musician L.V., who you might recall from my coverage of Til Det Bergens Skyggene, a more rustic example of ambiance which some might brand ambient, others might dub 'dungeon synth', but struck through with tints of folk abandon and isolation among both the depths and surface world of the Known World. Portal is rather the opposite, a solitary, 43 minute, consistent excursion into what feels to me like an extraterrestrial plane. Perhaps resonating off the hull of some cyclopean World-ship cruising the void between galaxies. Or something your imagination might produce as a feedback loop during nostalgia for lunar landscapes, ancient science fiction concepts (pre-colorization). Free of the convention of percussion and other rock sacraments, the spacey synthesizer pads embark upon an oft empty, oft ebullient discourse. This is not a vacuum which entirely lacks in warmth; he is constantly supplanting the thicker, murky, fear-induced strains with cycles of more radiant non-melodic tones and effects that seem delightfully spontaneous.

I told you: deeply personal. One human being experimenting with sounds foreign to the herd-mind misconception of what music might encompass or become 'defined' as. That's not to say L.V. is the first cosmonaut out in this stretch of universe, but due to its general lack of rules and scripture, this stuff always feels fresh and unpredictable, even if that sporadic nature arrives in the form of subtler sounds than chaotic, blazing grindcore guitars or acid-trance crabcore keyboard harmonies. Mood music, absolutely. Not something you're going to appreciate much if you can't set yourself up to receive it. Park your posterior on a hill at night, stare off into the darkness, and come to terms with your smallness in the face of it all. Dream of satellite dishes signaling off into the interstellar range, where they most likely will reach nothing. The tape format only adds to that nostalgia, that horror, that antithesis to sentimentality which such cold and distant music revels in, but the real joy of Portal is how, upon the precipice of becoming lost and frozen forever, you'll experience this peel of light, a far-off sun erupting, and know that somewhere, someone is still breathing, dreaming. And goodnight.