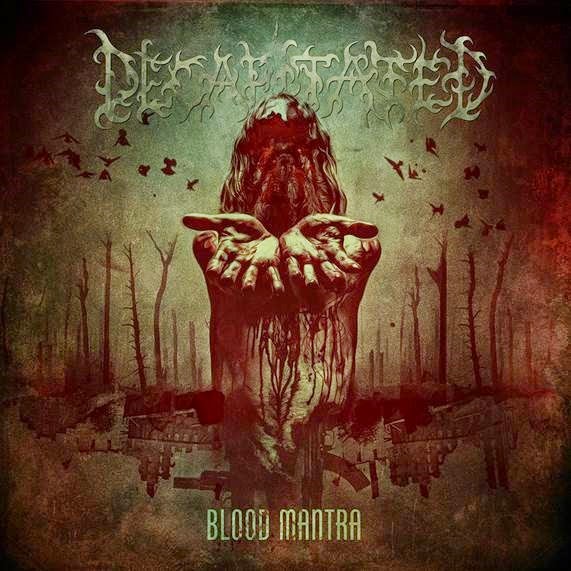 Though Blood Mantra is far from the return to form I had hoped it could be, it at least sounds like the band assessed their second-rate 2011 effort Carnival is Forever, and then gave themselves a series of kicks in their own asses to provoke a little more genuine anger and energy into the inevitable followup. That's not to imply that this is in any way a 'good' record. It has proven even more forgettable with each successive listen, but if all hope had been lost through its predecessor, at least there is a spark now...maybe. Of course, when I see band members claiming "Blood Mantra is the most heavy and mature album we ever did in our career" amidst the usual shitstorm of metal press hyperbole, I have to wonder if the Poles are listening to the same record I'm hearing...because these guys were writing far more intricately sculpted, mature death metal when they were in their teens...Blood Mantra is the sort of disc that could honestly just turn up from any band with its feet soaked in death, grind and groove metal, and then straight to the bargain bins in the late 90s. Competent in its performance and production, but soulless in its pursuit of that timeless quality we attribute to top flight death metal.

It's a concussive affair which alternates between bland, robotic blasting passages, chugging queues beyond which the bass guitar is allowed to roil around in its distorted flatulence, and then various post-industrial atmospheres are strewn about, marking a return to the Organic Hallucinosis period. Frankly, it's not such a bad idea, and that was the last Decapitated disc I actually enjoyed, but alas, they don't do much with it beyond pay it some lip service...as a whole, this album never steps beyond the bounds that they've ever set before, and if you're expecting anything by way of compelling guitar progressions that characterized their first few albums, you are almost shit out of luck here. There are a few which achieve the syncopated, precision punch sophistication you'll recall from Nihility and "Spheres of Madness", and those are surely highlights here, but sadly the banal groove/nu-thrash metal elements arrive in the form of "Veins", etc which might as well just be textbook Soulfly or any of a number of other mediocre bands who tried to capitalize on that whole thing. I won't fault these guys for lacking variation or versatility...Blood Mantra is pretty carefully balanced to provide its audience with a number of mood shifts, but the issue for me is that none of these moods are capable to provoke memorable atmosphere beyond the LCD neck-strain and pit-flexing requisite of popular metal bands.

Based on raw musical proficiency alone, this stuff does deliver. Michał Łysejko is flawless on his debut, but perhaps a little too flawless, since his aptitude is so resoundingly mechanical that you wonder why they even needed to hire a human. But let's not write the guy off completely, because he's also capable of showing some restraint where needed during the more progressive side of the record where the guitars take on far more importance. The guitars are somewhat technical, and do often go into some minute detailing, but the issue is that the notes are just not that interesting in succession and I felt that, even with all the considering meandering between tempos, I was still staring at some level, unbroken, not-too-creative plateau. The bass tone sounds great, but there are never any lines that catch the ear, and the leads just feel like runs through scales or structures rather than efforts to explode with either orgasmic emotions or frightening industrial dissonance. Man, it just got boring...no matter how skilled these guys seem, how many endorsements they receive, how many tours they embark upon, there's something to be said when single songs off Winds of Creation are more interesting and memorable than all of the content combined on an album 14 years younger...

Rafal's vocals are just as bog standard here as on the last album, a pastiche of Cavalera, Anselmo and Greenway cliches which basically just fill in the spreadsheet of what needs to be grunted and barked and utterly indistinguishable from a thousand other front men. Your friendly neighborhood corner groove metal guy. Not all the lyrics here are bad, but it's particularly funny when he's grunting out the 'fuck for money/fuck for name!' lines in the song "Instinct", during a groove over which I kept finding myself reciting Flava Flav's chorus in the old Public Enemy track "911 is a Joke", for whatever reason. Parts like this simply feel like they involve more pandering and rabble rousing to those whom only the exclamation of profanity can inspire from their shoddy lives, which is a little frustrating because half of what the band has to say here about the disenchantment of the Millennial internet generation (which has been the subject matter for about 3 albums straight) carries some weight. If only Blood Mantra wasn't, itself, contributing to that very same sense of futility, anxiety and impotence. Everything in the world at your fingertips...all that history, all that information, and no cause or purpose with which to approach, nothing whatsoever to do with it all...just like the musical chops on exhibition here. An inoffensive, competent musical battery? Sure. Superior to the band's career nadir to date? Why not? The once-bright future of death metal? Extinguished.