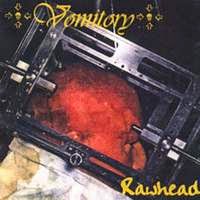 I was able to cover Hour of Truth and Baschlasophobic a few years ago as I was doing my massive examination of the Teutonic thrash scene through the decades, but the German Vomitory's third full length outing Rawhead was unavailable to me at that time for listening purposes. As it turns out, leaving this one in the dust would not have made for much of a difference, because while the album does have a share of appreciably brutal moments as far as thrash goes, the whole affair reeks of another of those countless attempts to 'adjust' thrash into the nu-mosh, groove mentality so dominant throughout the 90s that it rendered the careers of so many hopefuls inert. Vomitory's 1991 debut had been an acceptable if far too late to the game example of thrash will little to no distinctive characteristic with which I could separate it from hordes of other hopeless bands attempting to fill in the gaps left behind by infinitely more unique and inspired predecessors. The sophomore dropped off considerably in quality from even that, and Rawhead doesn't do a lot to improve matters...

Once again, a real shitty cover artwork which doesn't gel well with the forgettable script they used for a logo, which coincidentally never fit at all with the music on their releases. Once you get past that, you are presented with an acceptable, ambient intro which might have proven the spark for a more interesting, progressive sort of album, only it doesn't, because you're in for 50 minutes of banal, meaty thrashing which honestly sounds like a more bouncy late 80s Sepultura; not only in the structuring of how they put together riffs, or the more grueling, growling, grimier and bulkier spin on Cavalera-like vocal barks, but also the brash rawness in the guitars which gave me a distinctly Beneath the Remains impression. The real down side to Rawhead is not that the group isn't occasionally capable of throwing down a genuinely mean rhythm for putting on camouflage pants, bouncing around the steakhead moshpit, but but that so many of them can be seen coming, redundant patterns rooted in nu-metal jump da fuc up and that strain of NYHC brand throwdown redolent of Biohazard. The riffs do seem to subsist often on an uninteresting chugging base which functions strictly off the grooves of the drummer, but then will shift off into some more hardcore-inflected chord choices.

That's not to say they don't have a few songs on this which manifest into a more traditional thrash anthem, with some frivolous but not unengaged leads for good measure. They even pattern some of their selections with a hint of more interesting post-industrial dissonance, but in general the stuff is just so predictable that the only excitement ever comes when they shift tempos, but then that is soon joined by the disappointment that what happened next was equally as boring. To top it off, you've got vocal patterns as in "Downfall" where wiggy repetition is used to low yields, almost as if they had gotten a guest spot with some poor man's Jonathan Davis impersonator and thought it was a good idea to enhance the brand with a little Korn, since that was all the rage at the time. So you are definitely hearing some Life is Peachy, some Roots here, and it kind of dilutes what traces remain of true, clinical German thrash...they exist on this album, but not enough to turn back the 'cult of the new' vibes that Vomitory was obviously surfing on. The album is also way too long...52 minutes, even if three of the cuts are under a minute; with nothing reward awaiting in its depths. Is it worse than Baschlasophobic? That I can't say, since it at least feels meaner and they very rarely latch onto a better riff than was found on the 1993 album. It's just the very definition of mediocrity, and had absolutely no prayer of making an impact even by '96 standards.