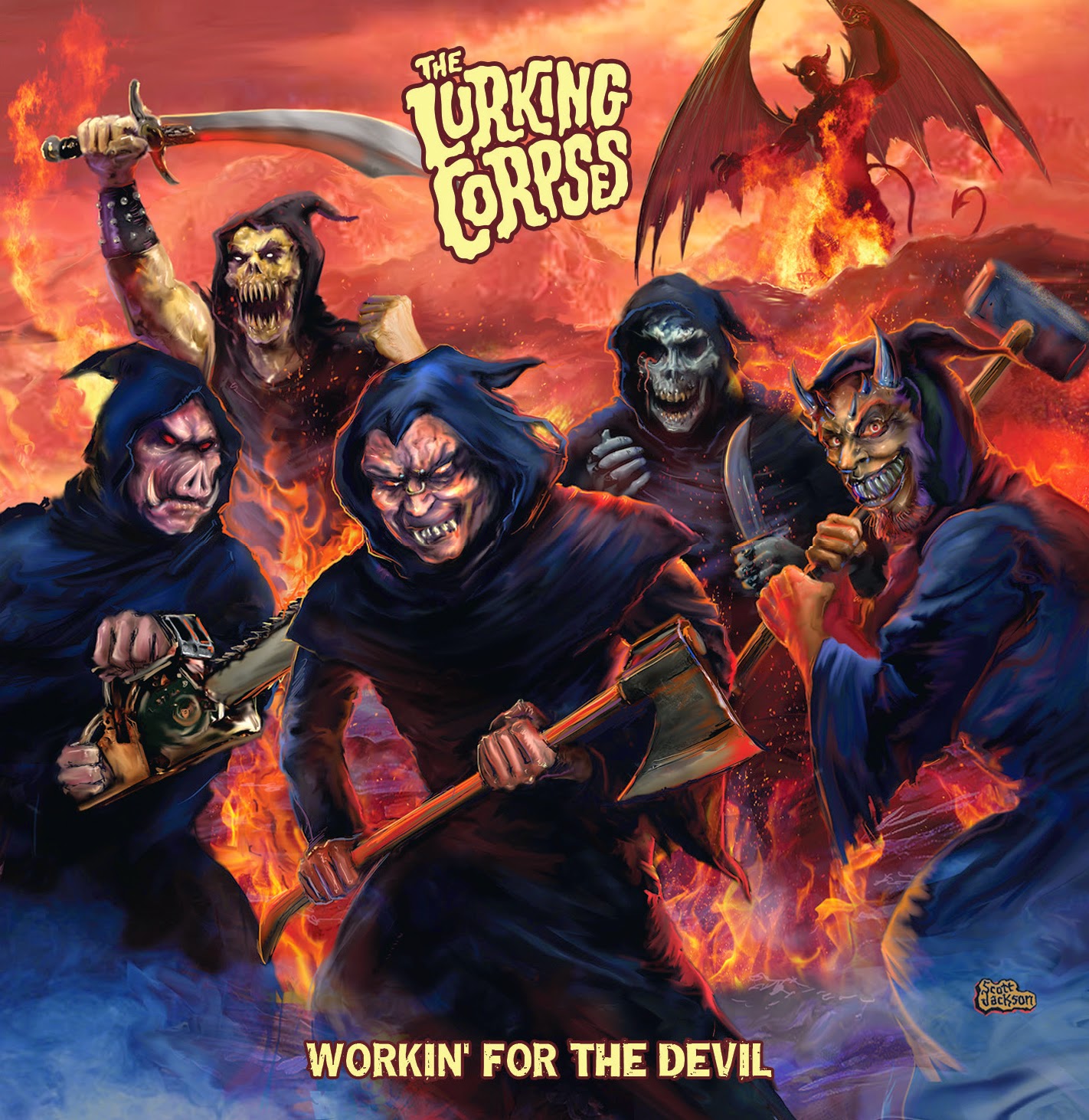 The Lurking Corpses are one of those fondly spoken-of bands deep in the heart of the US scene that I've taken far too long in getting around to check out. Not that the results of doing so have proven all that fruitful, but these guys definitely have a party metal atmosphere about them which rescinds any real effort to take them too seriously. Which leads to an obvious question: 'If they don't, then why should you?' Frankly, I doubt they want you too...this is a band which plays campy horror death/thrash for fun, imbues it with a healthy heaping of punk, rock & roll and traditional heavy metal aesthetics and then use their lyrics as paeans to the classic horror films and stories which inspired them. 'Death' in the Nunslaughter/Deceased sense, not exactly Morbid Angel or Bolt Thrower. Band members have handles like 'Cousin Eerie', 'Friar Frightengale' and 'Lord Vladimir von Ghoul'. Really, this is fit for Halloween keggers, apple bobbing with just the hint of a razorblade...maybe being in there...somewhere. Thrash for killer clowns, or Addams Family fanatics. Better yet, The Munsters.

What manifests musically is some very stripped down, semi-meaty death/thrash/heavy metal circa King Fowley's October 31, but with tendencies to swerve off directly into Misfits-land, like in the verse of "The Leech and the Worm", or the chorus of "Tonight", where the simple punky chord progression is festooned with Lord Vladimir's best Glenn Danzig drawl. In other places like the opener, "Workin' for the Devil", there are higher pitched shrieks which I can only guess are an attempt to scratch a King Diamond itch, but these are an exception to the rule. Von Ghoul isn't just strictly trying to bite off his inspirations, though, so he throws in a more churning mid-ranged growl, or a ghastly growl like in "The Legend of the Swamp Hag". Variation isn't exactly a problem, and he strives for at least some charisma, but I often felt like the vocals felt too impromptu sounding, lending the record a loose and 'live' vibe, which isn't in of itself a flaw, only I just never found many of his lines convincingly catchy. More like goofy and serviceable, which mirrors my impressions of Workin' for the Devil as a whole, an album that is probably decent for a few cruises through the neighborhood on Halloween night, spraying some pumpkin spice confetti on the unwary Trick or Treaters, but not much valued beyond that...

The riffs are alright, but all pretty safe and stockroom for punk, thrash or even the proto-power metal sequences, to the point that I can't point out a single moment that impressed me. Leads are present but disposable, lacking the emotional impact they generally require to stand out. Lyrically, it all tends to vie for the rhyme scheme, with plainspoken imagery linked directly to the films they celebrate (like The Gate). Production is vivid and never lacks in punch, and the cover art colorful without completely stepping into comic book caricature land ala Ghoul. There are also a considerable 15 tracks, of varying lengths and styles, including a cover of Slayer's "Tormentor" to top it all off; yet this actually doesn't end up working in the album's favor, because it feels like too much average material for too long. A myriad of decently placed samples throughout the songs help shape the kitschy horror theme, but without strong, explosive riffs or highly atmospheric moments to capitalize on them, they seem almost like an afterthought. We know silly masked bands are capable of also producing some excellent music, hell just listen to Scumdogs of the Universe, We Came for the Dead or Destroyer....this album just doesn't seem to strive for much. But, despite these many critiques, I didn't actually hate this at all. It's aware of its limitations, consistent in its formula. Promises and delivers a little whiff of nostalgia, parties hard, and then flies off on a broom. A B-movie you'll throw on for mood, never for story.