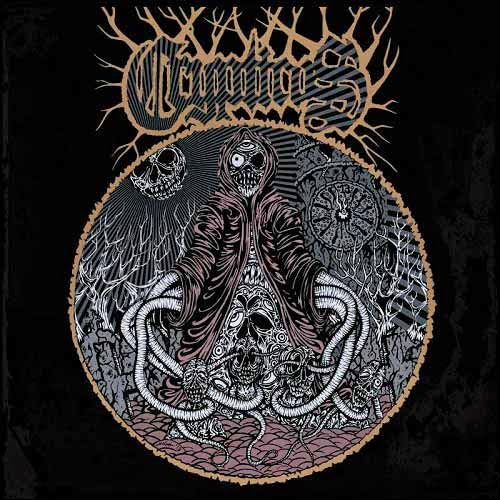 I've yet to be displeased with anything Patrick Bruss has released under the Crypticus brand, and The Barrens has not proven an exception to that fact. It doesn't quite hit me as directly in both the gut and funny bone as the sophomore They Called Me Mad!, but I think this is easily the most matured material he has put together, channeling old Swedish and Floridian influences into a broader palette of riffing progressions and idyllic horror atmospheres than your garden variety Dismember wanna-be. The album looks great, with that Lovecraftian, cartoon-like figure interposed against what looks to be an undead sun, and really the whole thing breathes...or rather 'reeks' of enthusiasm for the campy and classic horror tales to which Bruss is paying homage, while sort of transcribing them into his own mythology of monsters, black magic and mad scientists. Hell, I even read "Late Night Horror Queen" as a ravenous tribute to Maila Nurmi (Vampira) or Cassandra Peterson (Elvira), which is kind of fucking awesome.

Rhythm guitars definitely swerve slightly into Swedish territory, which is nothing new here, but the difference is how he constructs the riffs themselves, which take on an often more thrashy aesthetic more directly reminiscent of a median between Slayer and Carcass. Pair this up with Patrick's gruesome gutturals, which often sound like a rent in the time continuum from which some vast, otherworldly eyeball is staring forth, and then sprinkle loads of simple but effective melodies, both airy and tremolo-picked above the death/thrashing vortex below and you've come up with a fairly close approximation to how this album sounds. Like esteemed labelmates Ghoul, the 'fun factor' doesn't really ever leave the picture...but that's not to say he isn't spitting out some serious lyrics or writing music that favorable evokes death metal's underpinnings of terror and helplessness, he is just more apt to conjure up mental visions of Hammer Horror flicks, or black/white classics, rather than the edgy and uncomfortable torture porn which serves as much of modern horror. And I like that, that sort of passionate but lighthearted spin on the medium which Razorback has long exemplified, because when you're staring too long into the abyss, it's good to break for a beer and a laugh.

The Barrens seems a little more morose a title than the album sounds, but it's still plenty dark, a midnight matinee delivered with loads of themes and samples. The strength of the music does vary, with the occasional outbreak of some boring d-beat driven riff or a chord sequence that doesn't really go anywhere, but even within the limited subset of styles in which Crypticus experiments, he does manage to achieve some degree of variation, and though the music is never 'complex', he does seem to invest a lot of shifting time signatures and structures into even the shorter pieces. I will say that I did not always love the drum tone on this one, it feels a little too loud and mechanical, in particular the lower end of the kit, which sort of contrasts against the more atmospheric combinations of the grinding rhythm guitar, ugly growls, and lead harmonies and melodies. But when this record totally comes together, like the beginning of "Ceremonial Surgery" or the old Entombed-like groove that opens up "Misanthropy Mine", I am reminded of why this is an act that will still take me some time to grow tired of. Not his best album, but definitely consistent.