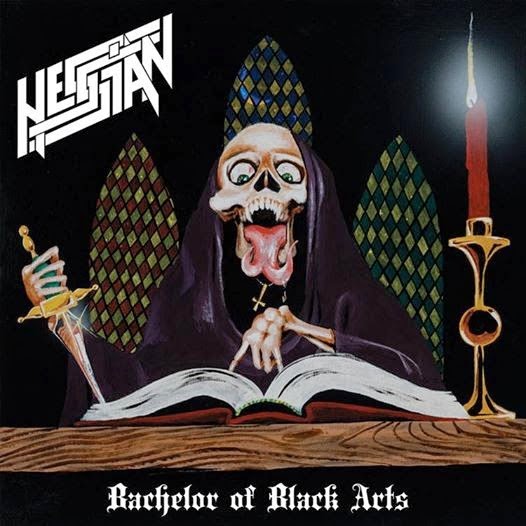 Had history gone a little differently, and the NWOBHM of the late 70s/early 80s was actually the New Wave of New England Heavy Metal, Hessian might have been one of the forerunner bands. A four piece Maine outfit, fully cognizant of the pure nostalgia they channel, stitching together elements of Diamond Head, Angel Witch, Thin Lizzy, Budgie, Rainbow, and Sabbath, with what is damn likely my favorite local record of 2014, at least that I've heard so far. Bachelor of Black Arts has struck on the StormSpell imprint kind of like a lightning bolt striking an airbrushed van, pimped out in scenes of psychedelic sorcery, diabolic congress, trafficking with the dead and the damned by candlelight. Raw heavy metal that evokes the scent of old denim, gasoline and cigarettes, the crush of old 70s concert billets underfoot and the urge to throw horns like horseshoes. This record feels so real that I was shocked the band members weren't at least in their 50s...

What's more, Hessian have the novelty of utilizing a male/female vocalist/guitarist duo who do their best to surpass their own limitations by laying those flaws bare, grafting together suave harmonies and rustic sincerity. They also don't shy away with a little 'narrative', like screams or gloomier male whispers that shadow Salli Wason's lines. The guitars cruise along with lo-fi, slightly filthed out rhythms in that old British tradition, primitive melodies glazing the shuffle and charge of classic, grainy radio rock riff progressions which shift seamlessly into leads; minimal enough that the vocals take charge and so noisy in execution that the album constantly feels like a rehearsal taping with little regard to polish or overproduction. The drums have that live hiss to the crashes, and box-like kicks and snares which sound like the kit cost $100 from a mail-in catalog in the 60s. You think I'm saying that like it's an insult but believe me: totally the opposite. The bass-lines bounce along haphazardly, following the general note placements of the guitars but curving off enough on their own to feel like they're not falling asleep at the wheel.

Every once in awhile Hessian will rattle out some really generic chord progression that has simply been played out so many times that it could have been cooked a little further, and that's a value issue, since it reeks of a lapse into laziness; but in general I think that, for a band so intent on touching its roots, and yours, they do a damn fine job of coming off as imaginative, and not just another soulless clone of the specter of the past. Like they want to take this style and really open it up, run with it, lace it with variation, color and spunk, which goes really nicely with lyrics rooted in fantasy, mysticism and cult horror. The acoustic folk/rock sequences are very well integrated amidst the dirty, thundering riffs to give the music a bit of a Coven feel, only they extend this outward into a more malign aesthetic than coming across like a troupe of hippy Mansonites that want to shoot acid while they shoot your live-ins with bullets...no, these are necromancers weaving a far more prolonged, tragic fate from you from their obsidian towers, and while Bachelor of Black Arts isn't quite a masterpiece of a debut, it's nonetheless magical. Saving throw failed, mother fuckers, this one got me good.