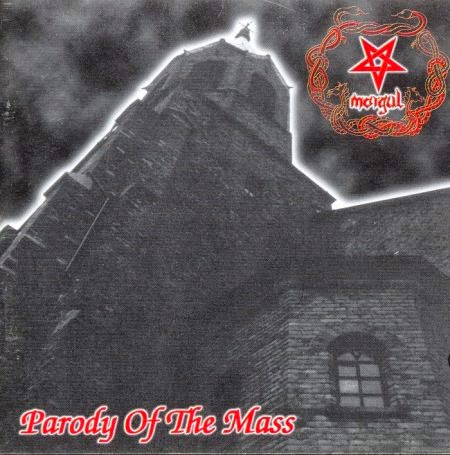 It doesn't look like much, with the stark contrasts of the red logo and lame album title font against the gray castle tower backdrop, but Parody of the Mass left me with a decent impression at the time, a solid (if less attractive) advancement in production quality over Lost in Shadows Grey, which takes on a more decidedly 'spooky hue' with Charmock a.k.a. Jack D. Ripper's more involved vocal efforts and the better placement of keyboards that conjure up nostalgia for 80s horror soundtracks, sad patterns of repetition that seem quite flush with a serial killer stalking by the moonlight, or a spectral apparition. In fact, this is just a solid 'haunted castle' black metal record if there ever were one, not as amazing as the first Tartaros EP but it's one I know I can rely on from time to time, especially in the autumn season, because I have a fetish for a lot of this later 90s symphonic black metal.

Parody of the Mass is not so thematic or atmospheric as its successors The Horror Grandeur or Sketch of Supposed Murder, in which Jack was bringing forth industrial/electronic influences more to the fore, but this does at least show some traces of that. The black metal performed here doesn't often take on the tremolo picked, traditional face so much as it involves a lot of slower chugging patterns with the 'orchestration' carrying the melody, but he'll also lay out these big unexpected grooves and squeals ("Healing the Blind") and break down into these impish 'horror' sequences where the metal drops out, and the drums will press on with vocal modulated narration that is simultaneously cheesy and endearing, so bad its so good and so forth. But there are more tranquil moments of escapism, like the piano/string instrumental "Torn" or the sweeping finale "The End" where the keys feel a lot more like an actual symphony, and it actually inspires some raw emotion. Otherwise, from a production perspective this all sounds tight...the bass is audible, the drums beats are fulfilling if unimaginative, and Jack's nasty rasp was definitely first class among his Norse peers Ihsahn, Satyr and Nattefrost in the 90s.

If you loathe the heavily keyboard-infused black metal, this won't prove an exception, because this was never a band drifting in favor of the Darkthrone/old Burzum style, rather floating away. I've long thought of this band's progression as a sort of aural analog to how horror movies evolved in the 90s and 2000s, the genre oversaturated with a lot of bad CGI ghosts and kill scenes and this guy was also sort of embracing the technology towards his own compositional evolution. But I like Morgul a lot more than most of that shit, and this was the birth of the transformation. My few tangible issues with the songs here are that, 1) several of the riffing sequences are too repetitious for too long, and 2) the guitars here only rarely spike off into a harmony or interesting note progression, too often settling as a pure rhythmic countermeasure to the symphonics, which is kind of boring regardless of who the artist is. Beyond that, this is a good album, Mikael Hedlund (Hypocrisy) and Terje Refsnes did a good job assembling it and if you're actually into bands like Crest of Darkness, Gloomy Grim, old Cradle of Filth and Dimmu Borgir then it's worth an 'approach', even if you don't end up buying it a drink or taking it home for an evening of passionate faux-Goth lovemaking.