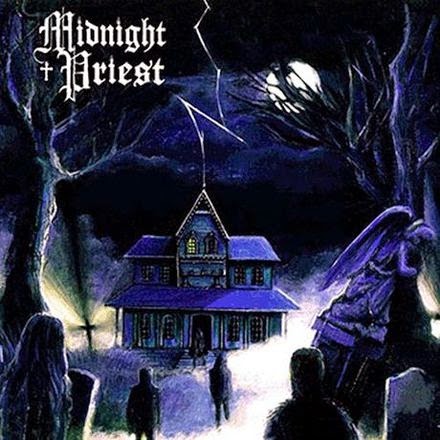 I doubt Midnight Priest is a band that would ever shy away from the inevitable comparisons to Mercyful Fate and King Diamond, since that set of influences serves as the brick and mortar to their own sound; yet there are actually a few distinct traits which place them slightly further away from the Swedish bands like Portrait, In Solitude and Trial. The native Portuguese lyrics & vocals being the most obvious, while simultaneously throwing a barrier to those who aren't interested in music outside the English sphere. Beyond that, the vocals of 'The Priest' also tend to incorporate a more nasally mid range than 'The King' would use, sometimes reminding me of Euro power singers like Kai Hansen, at least until the falsetto shrieks or harsher, almost narrative Diamond-like barks enter the frame.

Also, the guitar riffing here is very solidly produced and, while wholly traditional heavy/power metal in construction, the primary reason I was compelled to come back to these songs repeatedly and remember to write about the album come Halloween month. This is hands down one of the better records I've heard on the StormSpell Records roster. Not to sling any mud at the Californian label, because I certainly appreciate how it helps carry the torch for this niche, but I have occasionally come across some supbar records there which seem to be more heavily interested in the inhalation of their own nostalgic fumes than in really recreating the 'magic' of 80s thrash, speed and heavy metal. As for Midnight Priest, they seem like they're right on the edge of snatching that spirit back from the ether, by combining "Abigail" meets "Them" meets "Don't Break the Oath" era eloquent lead work with some meatier, middle class charging metal thunder riffs. It's far from a masterpiece, nor would it have been in 1984-5, but it's absolutely capable of evoking some of that old escapism when it tries.

You've got the obligatory acoustic, crystalline guitar parts reminiscent of how they were treated on the later 80s King Diamond material (including The Eye), and also the haunted churchyard intro which felt like someone translating a Poe piece into atmosphere. And then you've got those sturdy, mid-paced, roiling, lightly rusted iron guitars that climb up and down the spires of mystique and horror, while 'The Priest' will occasionally throw out some dead-wringer for KD's ethereal falsetto in tunes like "Segredo de Família". Yes, the tragic bloodline theme of records like Them and Conspiracy is also present in the lyrics here, which I couldn't completely translate, but seem rather obvious on the surface. The drums have a nice splash and crash to them, and the bass is audible if not interesting, but it's truly the vocals and guitars which drive my affectations for the music, especially when they lay out some unexpected, evil groove that would have killed me dead when I was 15. And then, in tunes like "No Calor do Inferno", they show an equal propensity for knocking out straight old Helloween style raging power metal anthems, so it never really feels like a complete xerox of that old Danish aesthetic, which works in the record's favor.

Production is good and beefy, not polished to a sterile finish, with the guitars really loud to the point that they often convey a bit of graininess in the ears. Just enough reverb in place to create those crucial moonlit night atmospheres, as the mind revels in fantasies of chilling after hours in the European autumn or winter, and I think the eponymous proves that Midnight Priest had a very clear, concise vision of where they wanted this to go, the music reflecting the artwork and vice versa. This is not at all an ambitious sort of album that reveals to me that the band can go 'further' than its influences, which frankly we could use a lot more of among today's retro-flavored metal scene. But provided you're open to the Portuguese vocals, which you should be unless you're a rabid ape, this is a good, solid, 37 minutes of melodic heavy metal which pays its dues.