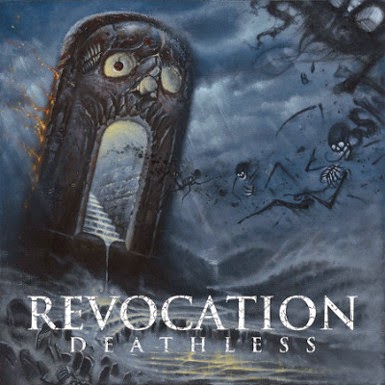 Coming hot on the heels of Revocation's somewhat disappointing, eponymous 2013 effort, Deathless seems like an immediate bounce back which adheres more closely to their original tech death/thrash blueprint without sacrificing some of the heightened proficiency that their current roster has brought to the table. I wouldn't say this is perfect, since there are a few components which I just don't think I'll ever really be into, but at the same time I'd have no problem dubbing it my second favorite of their canon, after the sophomore Existence is Futile (2009) which seemed to hit their creative peak. Add to that the classy tattooist/painter Tom Strom's cover art, and a generally more creepy vibe manifest through the leads, and this is certainly a fun, if not fervently consistent effort which should help continue the cultivation of their audience due to its no-nonsense, riff-driven aesthetics and solid musicianship.

Revocation still walks a similar path to that they've inhabited since they were known as Cryptic Warning, a hybrid of the guitar god thrash/speed metal of yesteryear (Megadeth, Slayer, etc) with the emergent progressive death metal of the early 90s (Death, Cynic, Pestilence), all bristling with the momentum and 'gusto' picking sequences attributed to Swedish melodeath masters like At the Gates and Dark Tranquillity when they were making their waves. All of the guitars are carefully plotted to provide a wide variety of pacing, structure and dynamic, but you still get that creeping feeling that they just can't nail down any one identity, nor are they striving to do so. There were parts on this disc that reminded me heavily of Black Dahlia Murder's gradual increase in death-thrashing inertia to a few riffing segments which, blended with the cleaner vocal tone (as in the "Deathless" chorus itself, or "Labyrinth of Eyes") feel a lot like Blood Mountain-era Mastodon; while some of more agile picking progressions almost rival Protest the Hero in their elasticity. However, when you really trace it to the roots, these guys are most heavily influenced by those 80s giants like Mustaine; they just armor and flavor it in a number of the trending sounds since.

And when I limit a judgment of the record strictly to the guitars, it works well in tunes like "The Blackest Reaches", "Scorched Earth Policy" and other numbers that stuck out to me even among a crowd of competence such as the rest of these. Phil Dubois-Coyne's drumming is a seamless fit to the almost mechanically shifting palette of riffs between more clinical, punctual thrashing and warmer, full-bodied chords in choruses like that of "The Blackest Reaches". Brett Bramberger's bass lines are usually just as adequate as the rhythm guitars, often deviating with some appreciable note choices, but I did find that they often got lost under the riff barrage to the point that I was only tangentially aware of their existence. But on the flip side, as much as I think David Davidson is an excellent musician and one of the most talented Massachusetts has ever birthed, I really just can't get into his vocals any more than before. He's assisted here by Gargulio, the other guitarist (progenitor of Artificial Brain, who you should also check out), but even in union the overbearing barks seem streamlined from that whole Pantera-through-metalcore lineage and lack any real charm, nastiness or atmosphere beyond pure testosterone...

The cleans are fine for some much-needed plot twists away from the growls and snarls, but even then they just sound like a lot of bands that have adopted the Mastodon style, ultimately indistinct. And that's really the hangup which prevents this from becoming a 'great' album, even if it's better than Chaos of Forms or Revocation or Empire of the Obscene. All the riffs and leads might not be equally ear catching, granted, but its the vocals smothering them all that just feel like a distraction and don't really take me further into the stories the band is trying to tell with its labyrinthine guitar-work. If you remember tech-thrash monoliths like No More Color, Deception Ignored, Endless War or even stuff Death was doing (Human, Individual Thought Patterns, etc), the vocals stood out just as much as anything else in the songs (not for their volume alone, as they do here)...they might have sounded weird, or flawed in many cases, but that just gave them more personality...the cadence and timbre of these barks just seem cut and pasted from a number of banal modern day groove, 'core or nu-thrash sounds, where even, and I hate to say it, a more brutal guttural might seem an improvement, or something unusual and attention-grabbing.

Fair is fair, though, and if this wasn't an issue for you on any of their prior body of work, then it is unlikely to dissuade you from this one, because though I nitpick, it's not like they're awful. The lyrics are acceptable, occasionally lame when they deviate from the horror/death metal tropes (like the self-referential stuff in the title track...'the blood of the insane boils in our veins'?...hardly), but I found the sheer songwriting and riff selection good enough here that I've gotten about a half-dozen listens through it, and will probably get just as many more, though it's not on the level of something like Vector's Black Future which burned itself into my imagination and has hung out there since. That said, Revocation are barking up a similar tree, unafraid to incorporate modern influences and that sense of melody and balance that a lot of their more brutal counterparts shy away from. And it's at least nice, that when you peel away those layers of paint, you know Davidson and Dubois-Coyne retain loyalty to that Golden Age of ideas and execution that so many other bands have either abandoned, or remain painfully unschooled in.