Walpurgis Night - Under the Moonlight (2011) 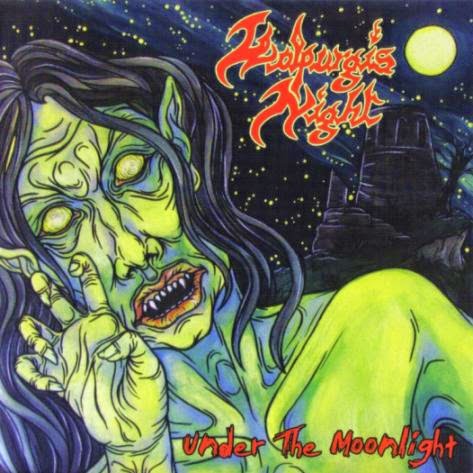 Under the Moonlight gets a few things very right, and a few things seriously wrong in the way a lot of Mediterranean region heavy and power metal bands traditionally have...but probably the biggest affront to my expectations was that the record looked like it was going to be some campy horror heavy metal deal and turned out to be a mash up of Euro-power metal tropes more aligned to the Helloween branch of colorful but not necessarily seasonal sounding school of thought. I was highly enamored with that style in the mid 80s, and still listen to the Keepers discs consistently, but I don't really gel so much with it anymore. Walpurgis Night are not even in the same ballpark as songwriters, so that probably gives you a pretty good hint of how much value I took away from this, though I shouldn't write it off as having no redeeming values whatsoever.

At its best, this is energetic, flavorful heavy metal glazed with loads of melodies and a rich guitar tone...though it does feel somewhat more 'processed' than usual, especially when it comes to the flurries of lead guitars. Don't get me wrong, a lot of effort seems to have been spent on the solos that they fashion together memorable, emotionally effective strings of notes, but they often blaze in and totally steal control away from the rhythm component. Sometimes the rhythm guitars will carve out a meaner sounding, 'street metal' progression as in "Laser Smash" which almost takes on an aspect of thrash-lite, but it does direly lack an effective 'edge' to pull off that brash cruelty; or total old school hard rock ala "Nightrider". A lot of the riffs and melodies also bear a striking resemblance to the earlier works of a band like Labyrinth or Eldritch, only lacking a lot of that prog/power polish and just not as interesting or memorable. They will also inevitably be compared to another Italian group, Trick or Treat, with a similar level of tongue in cheek lyrics, and for touting the sort of cheesy Halloween/horror imagery when the actual musical aesthetics don't pan it out beyond the most superficial connections.

Some credit should be given in that about half the tunes on this records have guitar patterns that at least strive to be creative, even if they don't ultimately succeed; in particular I'd point out tunes like "Castle Ghoul" and "The Assassin" which at times reminded me of Scanner's sophomore Terminal Earth, lighter and flightier heavy/power which has some genuinely catchy parts. The drums are decent, the bass doesn't cultivate much of a presence for itself, but if I've got one real gripe with this record, it's the vocalist. He's well capable of hitting pitch and harmonizing, he has some range, and there are moments of pure feel-good soaring Euro-power escapism, but his normal range verse tone seems to reveal a little too much accent, and a little too sloppy and disjointed what with all the backup lines being hurled around by the guitarist. In the end, the guy's just not that powerful or distinct, nor does it generate a lot of personality through its flaws. I'm not saying front men like Fabio Leone or Rob Tyrant are incredibly original, but they were pretty pro and this might seem a little too blue collar at times, a little half-assed compared to some of the music.

But, hey, if you really into those Underground Symphony years when an entire scene of this Italian stuff was booming in import record shops, I doubt they'd prove too great an obstacle; like I said, they do hit moments where they come together with the guitar melodies and transcend their limitations. Overall, though, such inconsistencies sort of strangle Under the Moonlight, robbing its better ideas of breath, and filing it into that dusty drawer of Italian heavy metal records few people will ever want to listen through. The lyrics are also really weak...I was hoping for creepier paeans to cult monster movies and stories, but these are average at best and cover a pretty broad net of subjects. If you look at the cover and expect some campy romp through the graveyard, it really isn't. A shame. They've got another record the following year which I have not heard, so I can't really comment if they improved, but the cover art is abysmal, even worse than on this one (which is charming in a juvenile way), so it doesn't exactly bode well for its content. Anyway, unless you practice the fetishization of a lot of the lesser tier Italian, Spanish and Portuguese heavy metal of the 21st century, I wouldn't bother.