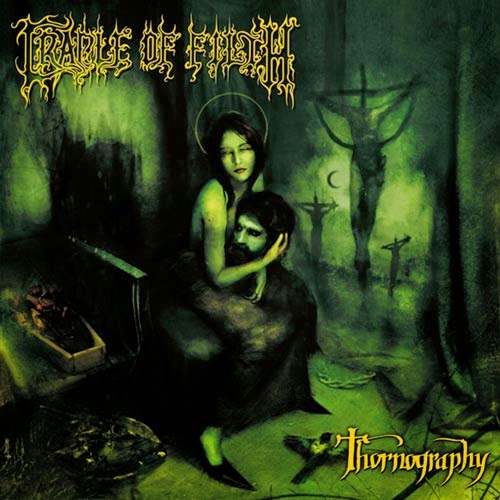 Thornography arrived in the midst of that nebulous era in which I had lost all interest in anything Cradle of Filth had to say. I had been a fairly strong advocate for the band, much to the increasing dismay of several of my more vocal vestie friends, up through the record Midian which I thought was their most seamless integration of atmosphere and riffing. Yet, even though I bought Damnation and a Day on the day it dropped, a number of listens in I could find almost nothing to enjoy about it beyond the production and sheer presentation quality, and Nymphetamine further consolidated the indifference until such a time as Godspeed on the Devil's Thunder and Darkly, Darkly, Venus Aversa arrived and seemed to rekindle the band's missing sparks into something progressively more appealing. Going back to this album now, I can see both strong and weak points that seem to cancel one another out...competently written and executed, but there are simply too few of those hilarious, over-the-top Gothic/black metal surges that infect my imagination to the point that I can't stop jamming the replay button.

The symphonic accoutrements that have defined most of the band's legacy were fully intact here, but the actual construction of the songs seemed to focus more on a straight up hybrid of heavy and thrash metal with the infusion of a few melodeath or melodic black metal tremolo picked guitars that sadly went nowhere except for the most predictable destinations. The guitars stand at the fore, pounding or chugging or occasionally searing along while the keys are used somewhat sparingly, and Dani Filth tries to imbue each of the lines with his trademark personality; anathema to some, beloved by others. It's all very clean and tidy and produced at the level a band like Cradle of Filth aspires towards (even though their name would and should imply otherwise), and that's kind of where I fell off from this. Because without really interesting riff structures that constantly dial my number, I find myself reliant too much on atmospheric aesthetics, which for some reason Thornography doesn't deliver beyond mere 'appearances'. Sure, the string arrangements and swell of "Under Pregnant Skies She Comes Alive Like Miss Leviathan" (for fuck's sake, be sparing with the lines of poetry as song titles, people) sound professional and really impeccable, or the deeper metal immersion of the orchestra in a tune like "The Byronic Man", but I just kept waiting for it to be 'catchy'...and it's not. Almost ever.

Dani Filth does do a decent job with his pitch here, striving for a little higher definition to many of his verse lines (not the screams), which surprised me because I thought this was around the time his voice was supposed to have fallen off, but he managed well enough in the studio. Lyrically, these tunes are just as strong as anything prior or since, diving into the band's stronger subjects of Gothic Horror...Stoker, Lovecraft, plus a little bit of sacrilegious fare. Of course, when you've got a tune called "Libertina Grimm" it's hard not to feel like Filth is just pandering to its Witchy Halloween Industry Horror-Goth ghoulfriends, but that's always been the case...Cradle of Filth is the evolution of Tim Burtonites inflicted with the poetic register of Byron and Wordsworth...if that offends your cold, raw, can't get laid Nordic sensibilities then of course you're going to hate the shit out of them; but if you've got a soft spot for Beetlejuice, Elvira, or the commercialization of Cthulhu then they tend to take on a more endearing, 'pet Gothic/black metal band' quality that is hard to get upset with. But, yeah, the guy just spends so much time on his lyrics...they are perfect for the image this band represents and frankly a lot smarter than many of their peers.

Unfortunately, that alone is nowhere near enough to make Thornography a good album. It gets off to a solid start with "Dirge Inferno", and truth be told there are a dozen or so decent riffs among the many on parade, but none that just blow you away like "Nocturnal Supremacy" or "Desire in Violent Overture" or "Her Ghost in the Fog". The drums sound a little too sterile and polished, the bass lines are nothing more than a footnote in the mix, and while the compositions seem aesthetically fluid with their neighbors, and there's nothing really wrong with them exploring the more pronounced heavy metal riffing and leads (which, frankly, they had done numerous times already), there just lacks a sense of character here. Simply put, not their best set of songs. Grist for the mill, keeping the career on track but not capitalizing on any of that creative momentum they had established up through the turn of the century. In revisiting this, I discovered a few tunes or individual riffs that might warrant inclusion on a longer Cradle playlist, but since I half-enjoy the sort of kitsch this band carries along with it, I expected this one to surprise me, and apart from a few moments, like the weird robotic filtered vocals in "I Am the Thorn" or the morph into straight up Gothic/heavy metal in parts of "The Foetus of a New Day Kicking" it was all normative. I'd listen through it without much aggravation if someone wants to, and even open the booklet to read the lyrics on occasion. It is arguably a little better than its predecessor Nymphetamine, but there are a half dozen other albums in the band's discography which scratch that festering Gothic horror itch a lot better.