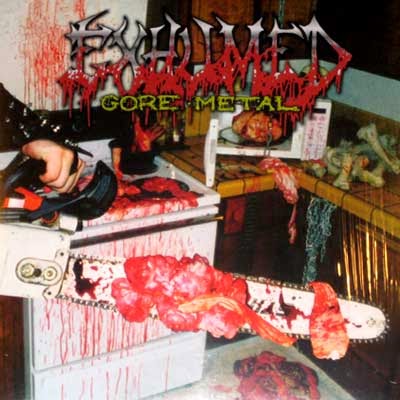 I've mentioned before that I really like having some 'continuity' for metal niches that I really enjoyed during their original incarnation. Very often a groundbreaking, legendary band arrives and departs from a choice sound within the span of as little as a single album, and in some of those cases I feel like it just wasn't explored to its fullest. That's not to imply that soulless knockoff bands should get a free pass when they can't apply even an iota of personality or raw conviction to their chosen nostalgia trip, but there are certainly scores of bands who cultivate a more genuine obsession. As far as England's seminal Carcass, their rapid musical evolution across albums left some of the 'possibility' of their earlier work in the dust, and as much as I love discs like Necroticism and (especially) Heartwork, I was quite relieved when a handful of Californian acts decided to pick up the torch from where Symphonies of Sickness left off and further carve out that specific aesthetic into something immortally volatile, grotesquely fun.

Exhumed first came onto my radar with the Relapse debut Gore Metal, although they had already been butchering cadavers for nearly a decade prior to that, manifesting right about the time that British classics like Symphonies of Sickness, Realm of Chaos and From Enslavement to Obliteration were starting to make ripples across the pond. So it's not too much of a stretch that this early grind sound plays so prominently into their development. Yet Matt Harvey, Ross Sewage and company imbued this with a healthy helping of carnal thrash, Floridian morbidity (in particular from the Scream Bloody Gore/Leprosy era of Death) and a lot more structure than progenitor efforts like Scum and Reek of Putrefaction would ever be accused of. Carcass is what I hear the most clearly, to be sure, with to the warring guttural and snarl vocals and flesh-churning guitar tone, but not every riff progression is some analog for those meat-hating metallurgists. Where their British forerunners had a more political theme behind their songs, citing medical journals to make the listener sick to his/her stomach, you can tell from the get-go that Exhumed were more interested in the slasher and gore genres of horror film...so these cold, forensic lyrics, which have a similar clinical quality to them, seem more like the aftermath of a murder spree...

But the music, that better recounts the actual act, with this fat, voluptuous rhythm guitar tone which feels like someone packed Repulsion's Horrified into some delicious, fatty livestock, seasoned it with Pestilence's Consuming Impulse and then served it raw, by the slice. Regardless of whether you want to call this 'gore-grind' or 'death-grind', the songs eschew the obnoxious practice of :50 of blasting, sloppy riffs and haiku-like lazy political ravings and morph into pure metal tunes, with demented, wailing leads that fit the tireless momentum perfectly. Oh, fear not, there are loads of blast beats, but these are balanced off against the death/thrashing obtrusions of a Leprosy, squirming entrail Symphonies of Sickness grooves, and King/Hanneman frenzies which abandon all home of coherent melodic components to reward the listener a more fresh perspective on 'the kill', the undiluted chaos of pure violence. Col Jones keeps the time with loads of fills ricocheting around the mix, and a solid tone to the kicks, toms and snare which don't mirror the more processed sounding drums of the brutal tech death movement that was in full swing by this point; and the bass guitar metes out the normal grinding fuzz, but still seems quite corpulent beneath the incendiary six-strings.

Gore Metal didn't tear my face off nearly as much as its successor, but to this day I think it's rightly a 90s 'classic' in the field which doesn't seem to age much...in fact I enjoy the album more than I did when initially exposed to it, and would easily recommend it to anyone who just wants some kinetic mayhem emanating through the speakers. Again, it's not exactly a repackaged Carcass, they've managed that themselves with Surgical Steel...but if you were seeking out a 'mirror universe' of that band who let themselves loosen up and have fun, this was the album that quenched the urge long before retro death became this overcrowded norm. A well-fed upgrade to a wealth of classic grind, tearing its way across the States and beyond, while General Surgery was simultaneously flavoring the same inspiration with their native Swedish crust overseas. This disc definitely scored the first few goals for bringing this sound back around, before being joined by wingmen like Impaled, Ghoul and Frightmare a little further into the game. Well worth owning this grisly, controlled charcuterie.

Posted by autothrall at 8:20 AM