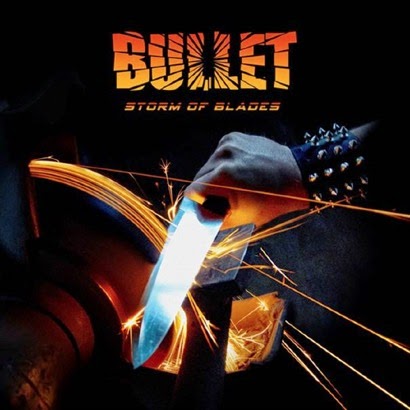 Bullet are yet another of those Swedish bands, or to be fair, modern day heavy metal throwbacks which advocate absolutely nothing out of the ordinary or unique whatsoever, yet manage success despite themselves because of a genuine love of their material which joyfully remonstrates just about every negative criticism I could possibly level at them. On the surface as below. You've seen this album cover a number of times before, only then it was by a band called Razor or Anvil or Exciter. You've heard the music before too, since it walks the same path Accept once did in borrowing AC/DC's charismatic grating vocals and then applying them to a heavier riff campaign; but Bullet actually manifest that influence through a mix of hard rock and heavier metal compositions which seem to pay careful tribute to both sides, one never alienating the other, with a few flashes of Ram It Down/Painkiller power metal to dial up the excitement value even further.

Vocals are the standout, sharpening Brian Johnson's raving into a vorpal edge by tempering them with traces of Rob Halford's screaming capacity, Udo's air raid belligerence and then painted over with a thin sheen of Ronny James Dio's higher inflection and lyrical meter. I never get tired of these singers who understand that it takes more than a crystalline range to deliver an ass whooping...the personality is instantly realized, the EDGE; even if it's nothing new, and you don't feel distanced from any sense of highbrow attitude...this guy's voice is perfectly fit for the scrapyard, the assembly line so many of us slave away in until our shift's over and we can get a beer. The tunes are divided pretty evenly between savage Teutonic semi-power metal Dio/Priest/Accept ragers like "Hawk Eyes" and the title track, mid paced melodic NWOBHM stuff like "Riding High" which wouldn't have been out of place for a Praying Mantis, Saxon or Def Leppard, and then some bluesier, rock tapping infused pieces like "Tornado" which hearken more directly back to AC/DC but endow it with drooping balls of iron. There isn't a single tune on the whole album that doesn't feature some prominent, catchy hook, even when they feel like they've been partially lifted from obvious classics like "Balls to the Wall", "Dirty Deeds", "Breaking the Law", and so forth.

Production is punchy but appropriate, with guitars in perfect syncopation, but Dag Hell Hofer's throat is just so raw and ugly in nature that it helps contrast the instruments to they never feel too polished. But I'd probably compare the mix most to a band like Saxon during their later 80s-90s period. I did find the bass lines to often lack much of interest, where they clearly could have walked along beneath such a simple riffing palette with some catchy grooves, and the drums obviously aren't meant to create an earthquake, they are mostly just the standard hard rock full court press with solid fills and never any attempt to congest the spaces between those chords. In fact, the whole rhythm section is so taut and compacted that it actually highlights the vocals and blazing, Scorpions-like lead guitars even further than they might have been with a more raw and ripping tone, or more splashy use of cymbals.

Really, though, this is all about the 'spirit' of the medium, which the Swedes do absolutely nothing to mock or belittle, something shit 'comedy' acts like Steel Panther could take a lesson or two from. Heavy metal is not a fucking joke for some of us, not just a convenient stereotype we use to distance ourselves from the rest of civilization. And it never was. I find it so refreshing to have outfits like this one and Enforcer and their ilk doing no disservice to the style they celebrate, which for a more jaded audience has long since been trampled on by increasing aggression and disaffection in both lyrical themes and musical timbre/technicality. To an extent, a record like Storm of Blades can never be perfect...it knows that, it knows it is 30+ years late to the party and for much of the world there is just no turning back. Even the band's name is retread from a relatively unknown German act active from about 1978-84. But it proudly flashes the middle finger anyway with a well written, archetypal effort that I just can't imagine anyone couldn't have a good time with this. Simplicity for the sake of craft. I haven't delved heavily into all of their older records but this is certainly the most fun I've had listening to them to date. Even my nine month old smiles and bounces around to this one when it hits the speakers.