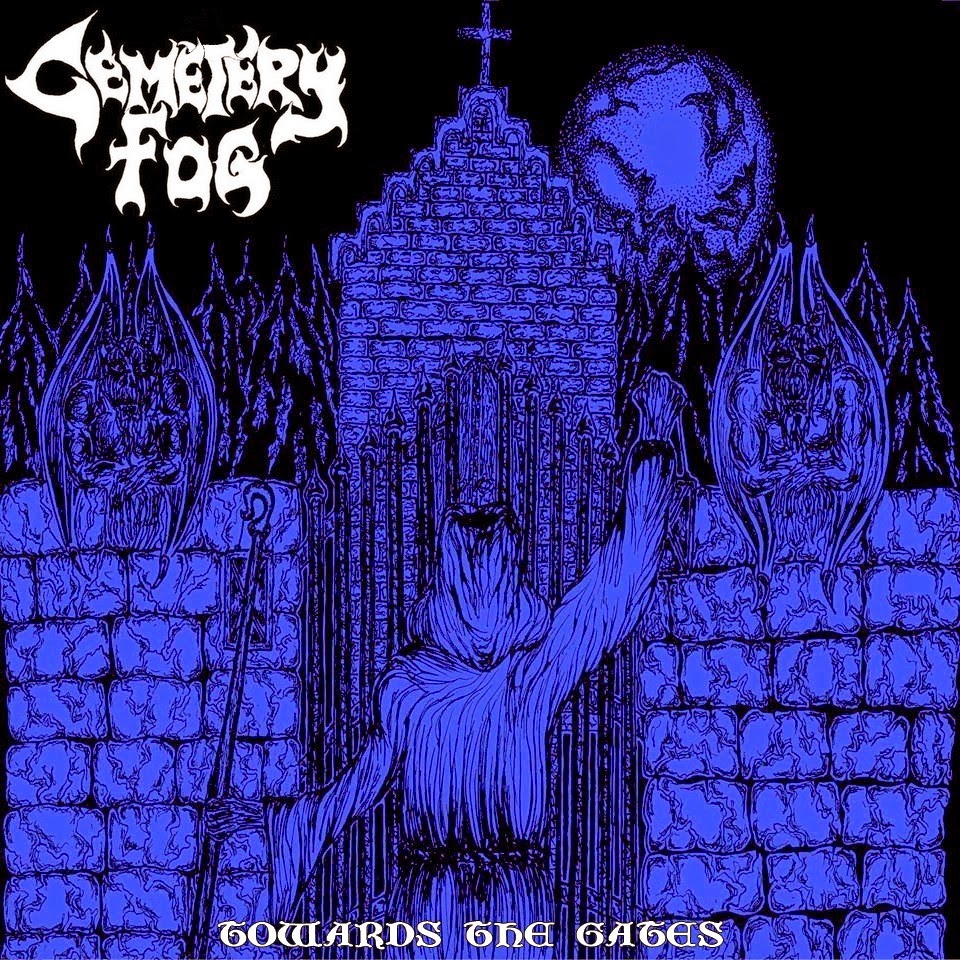 Another band riding the hype-train out of the underworld, Finns Cemetery Fog has recorded a number of demos which got, if what I'm reading is correct, some buzz through the underground due to their unflinchingly primitive songwriting style and old school hand drawn cassette cover artwork which likely reminds us all of our youths and what we would scrawl on our notebooks in high school. I did hear one demo prior to this (Shadows from the Cemetery) and was relatively unphased, but the sounds I'm hearing on this 12" EP, which is coming out through Iron Bonehead records, at least carry an authentic, atmospheric vibe to them which manages to surpass the rather vapid death/doom riffing passages which rarely seem in the slightest bit curious or compelling.

Perhaps the best way to describe this is vintage, slower Autopsy with an organ sound added to great effect. In fact, had it not manifest that additional, funereal quality I would have been quite bored with the riffing of tunes like "Withered Dreams of Death" and "Embrace of the Darkness". The grimy tone on the rhythm guitar is quite nice, it definitely seemed like a mashup of Severed Survival or Mental Funeral with the first Cemetery record (An Evil Shade of Grey), and they also have a few uptempo moments where the guitar hit an almost speed metal quality while the drums groove along at mid pace with lots of double kick fills. Most surprisingly, there are these moments deeper in the tunes (like "Embrace of the Darkness") where they implement softer, acoustic passages with soothing clean vocals...something that I'm sure many bands in this niche consider sacrilege of the lowest order, yet the Finns really pull it off...as well as some black metal tremolo riffing elements! I never felt put out by ANY of the variation on this record, and I think it's that same quality which gives this some legs to stand on, rather than remaining prostrate to its influences like so many other bands.

Ultimately, I found the atmosphere itself superior to a lot of the musical choices, but if you're in the mood for some nostalgia, infantile visions of haunted castles, monasteries, charnel houses and other horror set pieces, then this casts an effective, dim hue. The band clearly seems the type that went back to their roots, a crossroads of the death, doom and black genres, and then decided to kick off a new trail where those paths met. It's not necessarily unique, and its pretty cliche when it comes to the lyrics, song titles and the imagery that all of this evokes, but I was inevitably won over by its mood and mix of instruments. It's not as serious seeming as that new Rippikoulu EP, a band who I'm sure Cemetery Fog warrants some comparison to, but it was more memorable and entertaining. Certainly if you've got copies of classics like Mental Funeral, Retribution for the Dead EP, An Evil Shade of Grey, Lost Paradise, Gothic and December Moon EP among your collection, or Coffins, or the recent Macabra album Blood-Nurtured Nature, then this deserves at least a once over. It's not spectacular, but it does set the stage for such a potentiality in Fog's future.