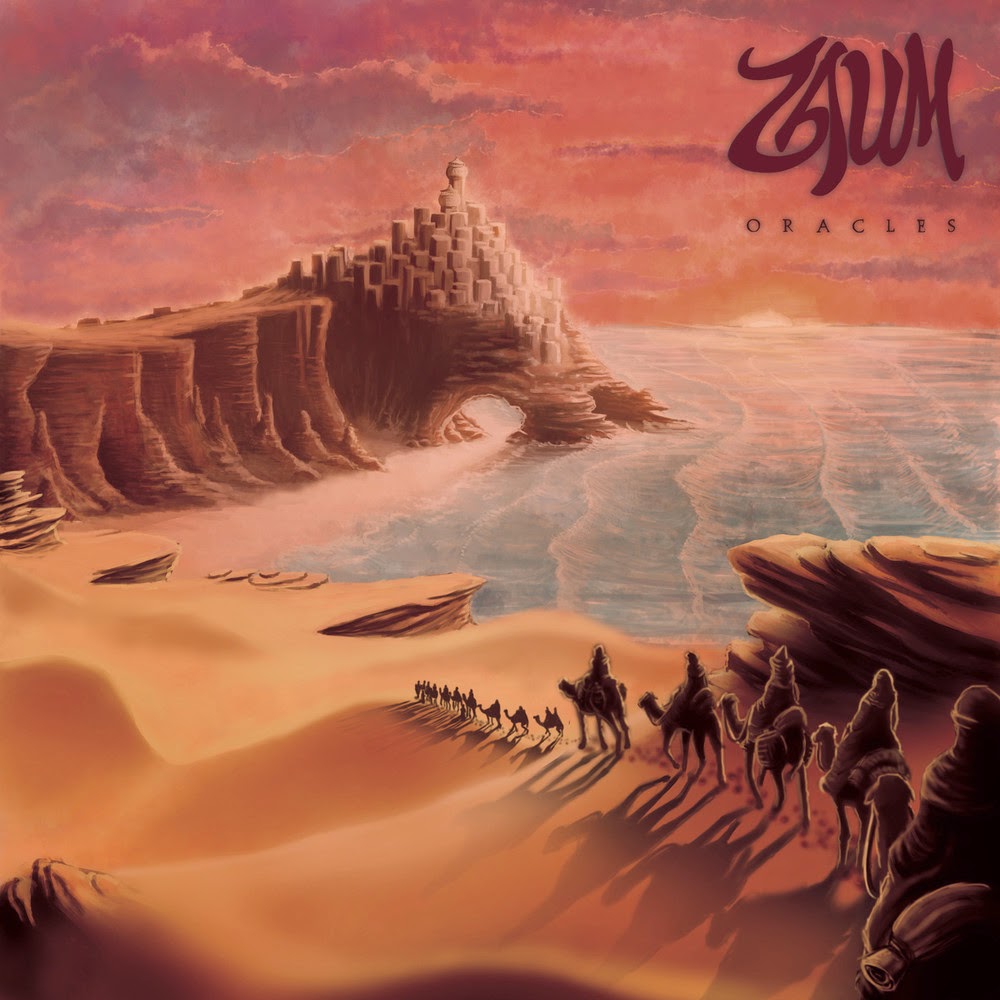 The instrumentation is what will immediately draw you in or turn you off from Zaum's capacious aural escapism, because the space in which they operated is entirely limited from a 'riff' perspective. That is to say, the New Brunswick duo puts together incredibly simplistic bass lines with a custom sound rig, slow and flowing beats with a margin of shuffle and groove to them, and then uses synthesizers and sitar sounds to create this greater illusion of depth, which is filled in largely through the listener's imagination. They're not the most minimalistic kids on the block, perhaps, but they clearly mirror the efforts of the phonetically similar Om in crafting drawn out, atmospheric excursions into the primacy of lethargic, heavy fucking music...and if you can shut down any expectations that they're suddenly going to transition into something 'busy' or complex, you'll probably fall in with this camel-back passage to foreign shores, inspired by Middle Eastern culture and lore from thousands of years ago.

Four tracks, fifty minutes...you know where this is going, that it will require a personal investment not to fall asleep, but Zaum ensure that it's not such a difficult task. Despite the comparable pacing of most of the material, they offer distinction and variation between tracks through shifting moods. For example, "Zealot" is solemn and drifting, with Kyle Alexander McDonald's vocals capturing their cleanest and most soaring range, to the slow but dreamy weight of the bass riffs. But move on to "The Red Sea", and the layered textures of the chanted vocal and the more crushing note progressions give it less of a psychedelic magnificence, and more of a claustrophobic sense of doom. "Peasant of Parthia" falls between the two, but those fat, molten bass grooves strike a more ominous, Gothic momentum. They're also not above letting the percussion drop off and the guitars ring out with a hazy, hookah-smokescreen resonance ala the intro to the finale ("Omen"), so there's always this constant sense of dramatic rise and fall. The Canadians take their sweet, sweet time, probably inhaling copious amounts of non-medical marijuana and other vices while they keep a mental clock of exactly when to just dump all that deep-rooted sorrow of centuries over your face.

There are unquestionably a few moments here where the meandering tendencies trump the common sense they apply so incessantly elsewhere, but thank fuck they keep it from ever becoming so boring that I tune out...a symptom of so much modern of this trippy stoner/doom mentality where 'We Are Heavy Because 20 Minute Songs', 'You Doom Fans Are Suckers And Will Buy Anything With a 60s Fashion Sense Because Like Retro'. The songs top off around 14 minutes at most, and there's very little in any of them which feels arbitrary. The vocals are uniformly mesmerizing, excellent and I would find it hard to believe as a result that McDonald won't be vaulted into the preternatural pantheon in which such front men are harbored...in this case, a well deserved distinction, especially since he's also keeping busy with nearly all the other instruments, establishing that exotic, flavorful vision of shifting, arid sands, long aeons of tradition so rarely transcended by change, a slowly spiraling time machine into times where faith and fire alone set the paths of men. A very well constructed, convincing debut here, and it will be curious to see whether they remain loyal to this particular theme or if they'll explore other aesthetic eras and instruments as they press forward.