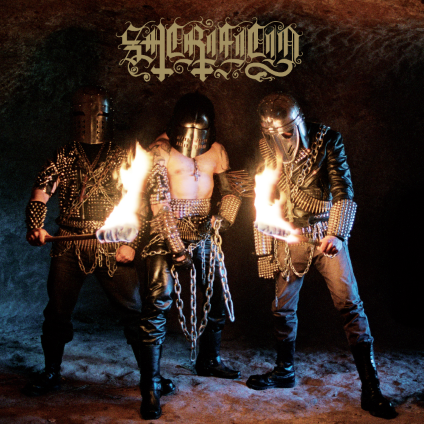 Strapped with some of the sexiest helmets in Europe, and some of the oldest school jams appropriated in 21st century black metal, the Spaniards Sacrificio attempt to dial back the years to a time where this niche could have been considered more 'innocent', or to be a little more accurate, genuinely diabolical. This effect is sought through a stripped down, raw 80s/90s cassette demo production and by re-purposing the rudest and crudest of aesthetics culled from the bands that were actually there at the time: Bathory, Hellhammer, Mayhem, Sarcofago, Samael, Venom and so forth. This is truly meant to feel like a lost 1st wave black metal demo that someone just randomly finds while searching through the slush pile of some ancient 'zine, but unfortunately its charms are kind of limited to that...and the great cover photo, of course.

See, the problem here is that the riffs are blemished with such bruising predictability that the six tunes never quite establish their own identity beyond just trying to present us with an 'ancestor' to the sounds so influential from that fabled 80s era. Mucked up production aesthetics are a given, granted, so you've got the hoarse and occasionally flanged sounding raw guitars coming in one ear, while the tinny and clunky drums attack from the other. The vocals are in Spanish and the guy has an effective, charnel rasp which is compelling enough in how it vomits out its disgust over the fat grooves, but overall the interaction of the instruments seems a trifle clumsy. Bass guitars are chubby but dull, and ultimately the most compelling part of this is the 'lead' guitars, which are these frivolous, warbling and atmospheric evil note lines, some of which seem entirely sporadic, that just bellow over the mix like smog elementals...if only the rhythms were in the least bit distinct and evil sounding a subtext for these moments, Sacrificio might have proven truly memorable.

Alas, not all the parts here were created equally, and the EP will thrive only as far as its audience is willing to stretch for old school, no-fucks-given black metal of a primordial age when the style was still being polished off. The riffs and beats are straight from the lexicons of Hellhammer, Bathory and Sarcofago, clubbing you over the head with methodic, distorted grooves that don't go very far. Structurally this is the antithesis of ambition, and while I realize that's part of the 'charm' the trio was aiming for, black metal records were perfectly capable of sounding sincere and sinister without having to sound like they were just rolling tape in a jam room. Not that I haven't heard that approach done with some success, but here it's little more than a crutch. A shame, because this band LOOKS pretty cool...the helms, the leather, the chains, the torches, who would NOT want to be friends with them? I certainly would...hell, if these guys went to my high school in 1989 I'd have followed them around and given freely of my lunch money. I just hope when they produce some new material the music will actually live up to the image beyond mere aesthetic choices.