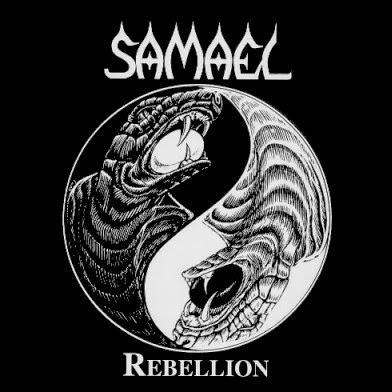 Rebellion is at the very least an interesting little median between Samael's strongest albums, a relic from a time when most bands still seemed to care about releasing short-form works that had some unique content and genuine value. At the time it was easily the most experimental and varied of their recordings, if only because they saw fit to really test the waters beyond metal with some of Xytras' evocative, ritualistic ambient music with beats (something they'd further extrapolate with Era One/Lessons in Magick #1). But I also remember this for its iconic serpentine yin-yang cover imagery and for having a few pretty decent, harder hitting tunes which mark that transition from Ceremony of Opposites to the sheer brilliance which lay just past it...

Of course, two of these are the re-recordings of older tunes, "After the Sepulture" and "Into the Pentagram", which I'm sure somehow infuriated someone, but strangely did not suffer from being given a Passage-like makeover with the upgraded production. Not that I have a huge problem with the original incarnations, but these are crafted well enough that I can't say I'd mind if the process was applied to a bunch of their other seminal material. The bass and vocal effects sound superb, the rhythm guitar tone meatier (ala Ceremony) and the melodies and atmosphere really ramped up. The other heavy piece here is "Rebellion" itself, a rousing piece which canters along with the same, menacing and grooving cadence present on Ceremony only with the synthesizers creating that cosmic mystique which so enamored me to the following album. I'll say it: when I first experienced the EP, that was my hands down favorite tune of the band's career up to its day, but I've since retrogressed to enjoying a few of its predecessors more ("Baphomet's Throne", "Black Trip", etc). Still, really dig some of the unexpected progressions in the keyboards, and it still sounds bad ass.

The EP is rounded out with a cover of Alice Cooper's "I Love the Dead" which is integrated rather well into the Samael sound. Hearing Vorphalack's goofy rasp hit the melody in the chorus is admittedly quite hilarious. That tune always reminded me of high school, but can you imagine showing up to Prom with this guy? Inverted crucifix in his cumberbun?! Lastly there are the two versions of "Static Journey", the first of which feels like an electrified Dead Can Dance, all martial bombast and synthetic industrial sounds used to convey an almost Predator-like threat that develops along an axis of clanking pipe-work and even a pulsing, inevitable techno beat. Basically this tune sets up the instrumental/alternate version of Passage, and the hidden version at the end of the disc features Vorph doing his best Laibach/Das Ich impression to boot. Again, a little unintentionally silly sounding, but still pretty excellent (the instrumental take in particular).

These days, this is conveniently attached to the 2001 CD reissue of Ceremony of Opposites, and I think aesthetically it matches up pretty well with the content of that full-length, but even in its original format this was not at all a waste of money for any Samael fan who was content to follow the group's gradual transformation. Considering the promotional detritus maxi-singles they'd put out for future efforts, this one had the courtesy of standing on its own two feet, even if one of those feet was re-recorded/cover material. I still break it out from time to time, though it's obviously wanting when compared to its immediate full-length neighbors.