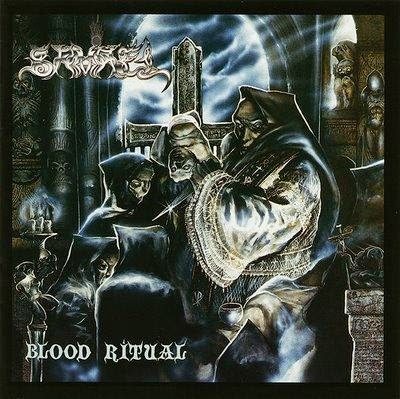 Blood Ritual was my first experience with Samael. It must have been around the time I was 18-19, and the black metal selection here was still fairly limited; beyond Bathory and Darkthrone there were only a handful of albums I owned in the style, and while I might have read a snippet or two from a zine about this Swiss band, I purchased the tape largely on the strength of Axel Hermann's cover artwork and the fact I was digging into those early Century Media releases/licenses with a passion. It was around the same time I was first checking out bands like Tiamat, Asphyx and Despair, but among all of those, I recall having the strongest reaction to this particular album, which in retrospect is a solid step above the debut Worship Him in every conceivable department with the exception of possibly 'cult importance'. Note that I'm not exempting myself from that consideration, since the personality of the debut easily precludes it from the near-mediocrity of its riffing, but Blood Ritual even gets that right.

This is probably the last of Samael's recordings to heavily feature the influence of their countrymen Celtic Frost/Hellhammer, contorted into an evil and grainy guitar tone that is immediately more appealing to me than the dryer, reverbed rhythm guitars on Worship Him. Construction of the chords and chugged mutes here is not only flavored with a mildly more unpredictable, vile sense of purpose which embraces a slightly more black/thrash balance than on the prior album, which was overtly a marriage of heavy/doom metal with the emergent black metal of Europe. Don't worry, there are still strong traces of that style here, on plodding tunes like "Macabre Operetta" which almost feel like outtakes from the debut, but even there the riffing, while predictable has a richer sense to it through the tone, and the slightly better bass lines support the guitars. Blood Ritual also maintains that steady, warlike pacing akin to Bathory and Barathrum, but tunes like "Beyond the Nothingness" and the title track definitely bring out a stronger presence of inspirations like Slayer and Obituary, with the rich palm muting, evil dynamics and potential to occasionally explode into a faster, pent up rage falling somewhere between the more plebeian Teutonic and Bay Area thrash 6-8 years prior. They don't stick or sink every riff on the thing, but the tunes are better balanced, more melodic and I certainly find it easier to recount them on an individual basis than the band's 80s-penned material.

One other area where the sophomore exceeds its forebear is in Xytras' growing abilities in sheer composition. Piano and ambient interludes abound here, offering deeper immersion into the nihilism and blasphemy which compels the lyrics. This is an important foreshadowing for most of the future albums in their catalog, specifically the next two after this, which for me represent the band' creative and qualitative summit. But due to the clear, superior production, the cleaner instruments really mesh well into the heavier pieces, which don't rely so much on atmosphere to squeeze by, but the richness and polish and warlike confidence of numbers like "With the Gleam of the Torches", "Beyond the Nothingness", or "After the Sepulture" which I'm led to believe is probably the most popular single tune from this disc. While I would define Blood Ritual as blackened, simplistic thrash with a lot of emphasis on the rhythm instruments and regal/infernal bombast, it also offers a slightly less bestial, messy and incendiary vision of the style than a lot of the other stuff which was coming out through labels like Osmose. This is a disc which almost always takes its time, allowing Vorphalack's hybrid of rasping and growling to offer more of a narrative context than raving lunacy.

Consistent enough that I find it somewhat difficult to choose favorites, this shares with the debut that sense of  timelessness. It's quite rudimentary, fundamental, and I can't imagine it could benefit from having a more contemporary production upgrade. Ironically, a band that often reminds me of this period of Samael is Triptykon, who often writes what in this era feel like pretty bland riffs, steeped in this crushing, massive modern tone which explains about 90% of hype for it. Tom G. Warrior seems to have taken a page from the very band that emulated his own alma maters, but despite the lack of age and rust upon this thing, I'm not sure the riffs here would be quite so interesting had Blood Ritual come out in the 21st century. For its day, this was a rather unique recording...apart from the Greeks, and a few crude American acts, much of black metal was heading in a more accelerated and intricate direction. Samael shared some of the symphonic inspirations with several of the German and Scandinavian second wavers, but how they structured the riffs and grooves in their material was more distinctly linked to that lumbering low-fi thrash and speed metal of the 80s. Blood Ritual would soon be eclipsed by the excellence of the band's continued developments, but this still remains one of their finest albums, and easily the best looking.