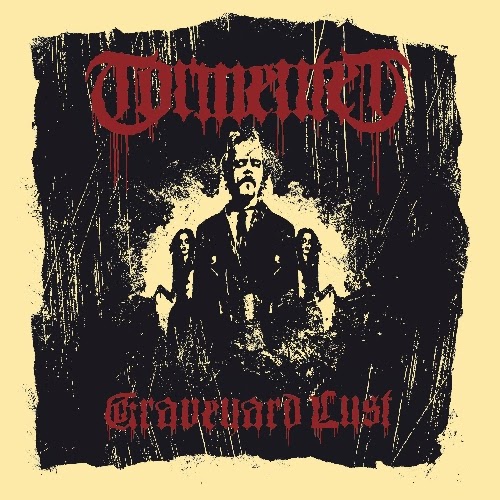 I'm approaching the Graveyard Lust EP as one who has already listened to and reviewed the band's later sophomore full-length, Death Awaits. That was decent, sure, but played it a little too close to the belt of their excellent debut Rotten Death which remains to me one of the benchmarks of this incestuous Swedish retro death movement which has produced far too much chaff by ratio to the wheat. So that sense of jadedness had already set it, that this would not in fact be a band that could evolve the niche in any meaningful way, and would inevitably become lost among so many others who are already on their way out of the collective memory. Graveyard Lust is unfortunately nothing which could have convinced me otherwise, but for the purist at least, it clings so loyally to the trousers of its predecessor that its nose is smothered in denim threads and waste.

It's a little less necrotic and claustrophobic, perhaps, but just as much of an analog for the classic Entombed sounds. Soil sifting Stockholm guitars, dense and dirty to compensate for the lack of interesting riff structures, laden in the baleful melodies that once were woven into records like Left Hand Path and Like an Ever Flowing Stream. Even the song titles don't try to deviate much from their overt influences ("Revel in Blood" instead of "Revel in Flesh", for example). The drums charge along with a d-beat pulse, redolent of Rotten Death, and the main difference between this vocalist and his sleeve-worn influence is the slight layer of distortion given to his inflection, almost like he was on a pickup truck that arrived on the set of the original Night of the Living Dead and barking orders that they need to move the shoot and herd the zombies to another location. In fact, if you look at the cover art here, that's pretty much exactly what they were going for, and it works well enough in the context that this was a live recording, without a lot of retraced overdubs. It definitely has a tightly sprung momentum to it, a nice low end due to the guitar fuzz and bass, so the production is saturated with that unhinged filth that so attracted me to the first album.

Dynamically, it's solid in that they'll hurl a few slower break riffs with drudging chords into the midst of the uptempo charges, but very few of the songs really seem to burn with that same evil as they did in 2009. "Slowly Twisted to Death" and "Sick in the Head" were the better tunes here, probably good enough for the first album but I wouldn't wish to fatten that up any more than needed. This is very much a side project by a bunch of guys who set out to pretend that the year 1993 had never happened yet, and I think they do a bang up job with that formula, but Graveyard Lust certainly doesn't stand out much from a lot of other bands (Mr. Death, Revel in Flesh, Entrails, Miasmal, Gluttony) who also occupy this particular throwback club, and I feel like they might end up as a 'one and done' situation, where the first disc was this great nostalgia trigger which was consistently engaging throughout, released at exactly the right time in this NWOSDM; and then subsequent recordings just feel increasingly redundant. Here's to hoping that a potential third full-length with juggle the rules, jiggle the handle a little bit. Flush the decaying flesh and show us another, fresher layer of skin.