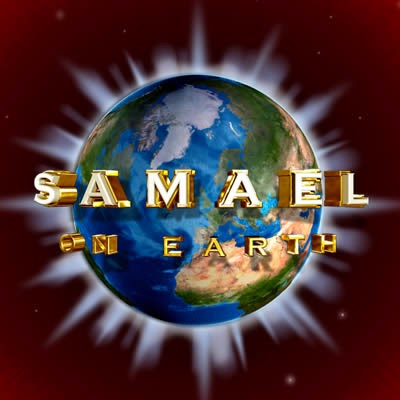 ...and onto part two of my three part series on Samael's most useless recordings, the On Earth EP was the second and I believe last such release to come out through the Swiss group's own label, called Galactical. One would have hoped to hear a lot more of their experimental recordings and side-projects through this imprint, but they were rather quick to call it a day in just about two years time, and if it was just going to end up an outlet for maxi singles such as Telepath and On Earth, we can be thankful. Granted, this one pretends to have a little more meat to it than its predecessor, if only because it avoids the 'karaoke' single/EP tag, and features a few tunes you weren't going to find on Reign of Light whatsoever. Joyous day.

"On Earth" itself is a direct continuation of the style from Passage and Eternal, mid paced, darkly and cosmically industrial; only Vorph's vocals are more pronounced and robotic. Like much of the album it hails form, the guitars are more or less regressions towards patterns the band had already written for the prior full-lengths, even if the precise notes are different, there's a lot of reliance on heavy, simple chords that follow the beat. This also suffers from the 'worldly syndrome', like they basically list off a bunch of cities in which their fans live, so we can all just be a big and happy fucking family. What the FUCK, Samael?! Why did you have to go all hippy on us? One world? Our world? What is this, a lost Michael Jackson tape? At any rate, the lyrics basically abolish any real chance of me taking this tune seriously, but if not for that then it would be a semi-serviceable Passage outtake that would have felt as if it were scrapped for other, genuinely excellent songs. I'm not averse to that positive, Romantic undercurrent Samael tapped into for their 21st century stuff, but it doesn't really excuse the shoddy and underwhelming songwriting.

As with the "Telepath" treatment on the prior EP, the remix of "On Earth" here is laughable at best, not danceable enough for the Euro EBM/Goth metallers who might care, and not harsher enough for the long since lost Samael fanbase off the first few albums. "Auf der Erde" is a German lyric version of the title track, and while it might benefit from the vocals sounding less dopey to those who can't speak the language, it's otherwise the same (i.e. the cities listed off). So really the only hope for the disc is the cover of Depeche Mode's "I Feel You", and in this too they fail, because hearing Vorph's sustained growls over an excessively industrialized rendition of the original with some spacier sounding guitars is incredibly goofy. Where Moonspell did a pretty kickass cover of "Sacred" that I still listen to, Samael's attempt fails to ever really launch, even if the pairing does make some sort of sense. But as lackluster my reaction, I would be remiss not to admit that this was the most entertaining point of the EP...the video for "Telepath" is included, but is nothing more than Vorph standing around, looking 'cool'...ugh. Anyway, the cover image is tacky (with that gold tinged logo...), the music is not good, just put it on the demolition list along with its predecessor.