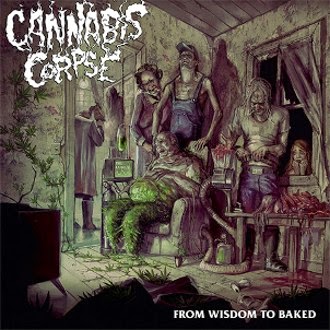 Add Gorguts, Death and numerous others to the roll of the legions of lampooned death metal icons celebrated by sort-of funnymen Cannabis Corpse, here on their fourth full-length From Wisdom to Baked. "Individual Pot Patterns", "Medicinal Healing", "Baptized in Bud", "THC Crystal Mountain" are just examples of their fixation on pot puns, which I'm sure for a green chunk of their audience (or anyone twiddling their thumbs for the next Bongzilla record) is the primary draw to their material. I've mentioned in the past that I felt the band has musically outgrown its lyrical and titling gimmicks, and that sentiment persists with this album, but I'll concede by now that it's probably too late to change. Beneath Grow Lights Thou Shalt Rise, a damn fine disc, catapulted the Municipal Waste side-project into the death metal conscience at large, and this follow-up largely stays the course, with a few marginal differences.

They still sound like Cannibal Corpse. A lot. And I know that's the 'point', but there are 'points' on this album where I almost got confused as to which band I was listening to. The rhythm guitars here are denser and punchier than on Beneath..., which reminds me of the other Corpse's recent tonal transitions, though the Virginians seem slightly more infused with the clinical, technical inclinations of their last effort than on, say, Torture, which was a stricter simplification. Tunes like the abusive and uptempo "Considered Dank" seem as if they were just copied, pasted and paraphrased from Cannibal's Bloodthirst-and-beyond legacy, whereas Beneath Grow Lights... had felt to me like it was moving off in a more unique direction. That's not to say they don't still possess the capacity to throw a left hook, a spurt of psycho tremolo picking or swerving, brutal chord-play which distinguishes itself from its forebear, but a lot of the riffing choices felt pretty safe and standard to the catalog of the band they offer themselves to in tribute. You might hear a few hints of Morbid Angel and old Gorguts in there, too, but largely they stick to that one primary influence, using the comparable octave chords, dissonant embellishments, and meat-hammering rhythmic undercurrents.

Land Phil's vocals draw the obvious Corpsegrinder comparisons, though I think there's a more haughty nature to his gruff guttural which draws also on a bit of David Vincent/Steve Tucker, not to mention a little Deicide when the multiple growls are layered together. The drums of HallHammer and the sheer volume of riffs give the disc a constant sense of being busy without lapsing into outrageous levels of technicality, but I have to say the most interesting instrument is the bass...Phil's lines are snapping, slapping, sliding, plunking and poking all over and through their neighbor's stash, and even when the guitars seem too derivative, he's there fattening up that bottom end like a stream of bog-water being flushed through a hydroponic system in the cellar. The mix is really well balanced between the vocals, guitars and percussion and you'll occasionally hear a more surprising melodic component to some of the riff progressions buried in a number of the tunes. As redundant as it might often seem, this is far from an effortless record, and at least the proficiency is on the same level as its predecessors.

Yeah, if you crave more of Cannibal Corpse, Severe Torture and other bands of that ilk than the originals can offer, and enjoy getting high at every available opportunity, then From Wisdom to Baked is more or less a godsend. It doesn't rock the boat as far as the prior releases, and once in a great while even tries something modestly 'new' to the cannabis canon. That said, even if it's not at all bad, I didn't get much out of this, with so many other great releases coming around lately. In truth, I found that song-for-song, riff-for-riff this wasn't as entertaining for me as the third album, or The Weeding EP for that matter. Kind of like the latest Municipal Waste full-length, it just feels like more of the same. Diminishing returns. Here's to hoping that Land Phil will give himself a little breathing space to reinvigorate both bands and lift them back up to the humorous relevance they both shared when they felt like a fresh perspective on the sounds they paid homage to.