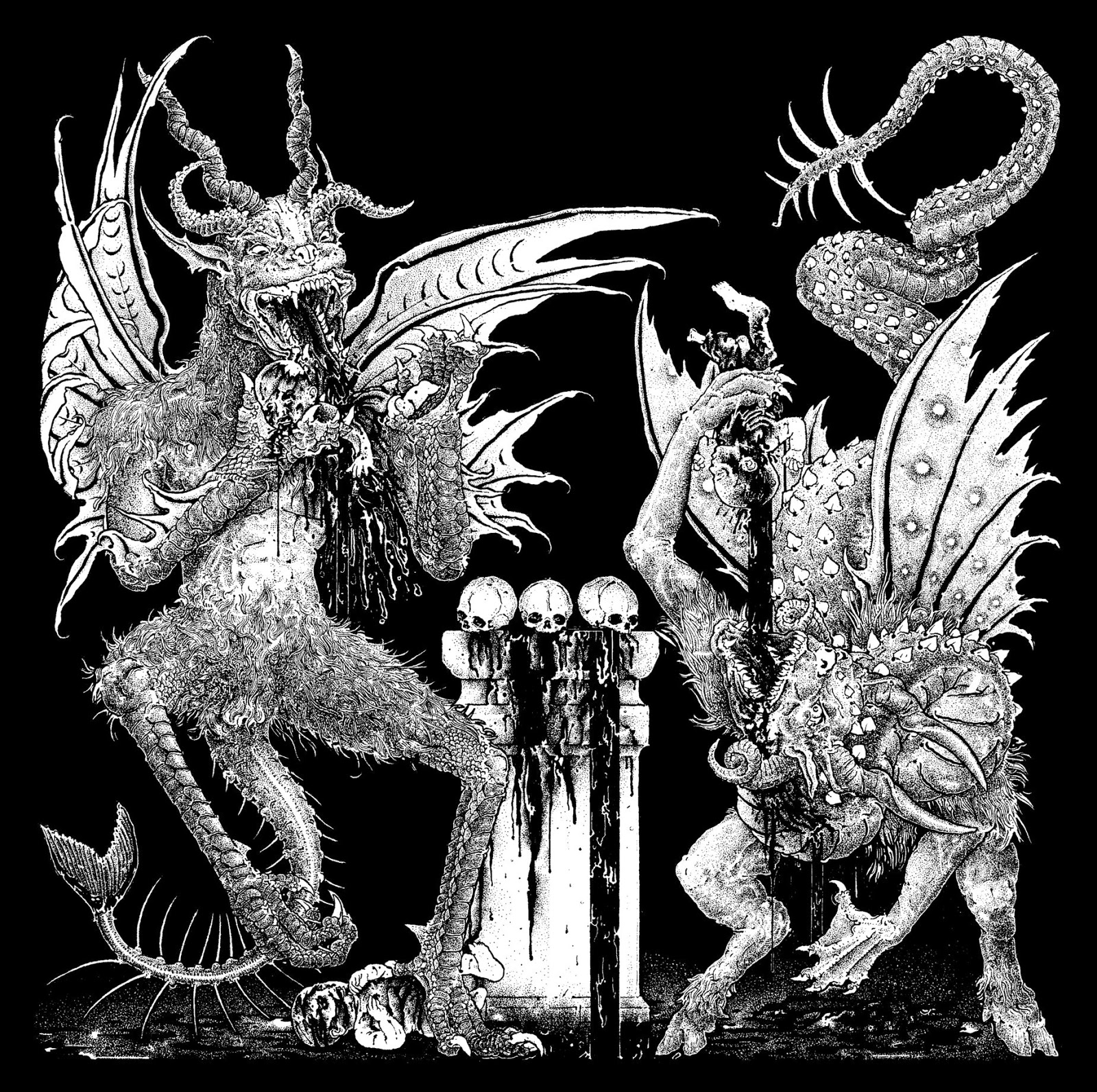 Poland is hardly a haven for haunting old school black or death metal bands, since so much of that scene's momentum subsists on the polished and brutal (or non-brutal) evolution of death metal titans like Behemoth, Decapitated and the mighty Vader. Every now and then you get an exception, like the eerie and evil Cultes des Ghoules, who have come along way with their exceptional album Henbane (2013), but the place is hardly littered with cavern core spelunkers or excessive Swede-o-philes, at least not from my personal listening experience. Thus enters Temple Desecration, a mysterious act adorned in ancient imagery, occult lyrical themes and an oppressive sound which leeches liberally from the clotted bloodstreams of the death, black and doom metal throwbacks internationally.

The Communion Perished EP consists of two lengthy, oppressive, churning pieces which seem most closely assembled from a hybrid of violent warblack metal (circa Canadian legends Blasphemy) and the gloomy, subterranean strains of death metal pioneered by Autopsy, Incantation, and their own Floridian peers Obituary (Slowly We Rot) and Death (Scream Bloody Gore). Fueled by oozing, driving distorted bass lands and rhythm guitar progressions that are about as intricate as a burly meat hammer which hasn't been cleaned off in months, the riffs range from slower, downtrodden chords reminiscent of funereal death/doom to more uptempo tremolo picked palm mutes and bludgeoning faster paced chords reminiscent of something like Bestial Warlust or older British deathgrind ala Napalm Death and Bolt Thrower. There are some pretty cool, cascading growls aired off in the distance, but the central vocal style is a pretty standard guttural with plenty of sustain, and while the drums take a backseat to the crushing quality of the riffs and vocals, they're competent at the simpler blast beats you'd find on the Osmose recordings of the 90s.

They throw in some chants and samples to round out the atmosphere of the music, but by and large this is really raw, straightforward and opaque stuff which thrives solely on its own darkness and momentum. Unfortunately, there is this ubiquity of standard and uninspired riffing which is just a mere recycling of so many bands to come before it, and that totally drags down the experience, which might otherwise be respectably ugly and consistent. Seriously, had each of these chord patterns or note series been filtered through just a little bit of minor variation, dissonance, or some eerily and stringy higher notes, they could have better served the barbaric undertones. I feel like so many metal bands these days (in both black and death categories) are relying too heavily on attunement to the nostalgia of their limited audience, instead of taking the steps to manipulate that authentic hostility and oppression of past decades into something more novel, interesting, even marginally complex. Temple Desecration is no more guilty of derivation than the five thousand other bands pursuing the legacy of their influences, but Communion Perished is another example of how a little more patience and unexpected songwriting choices could have really burst such raucous brutality out from its confines and into some memorable capacity.