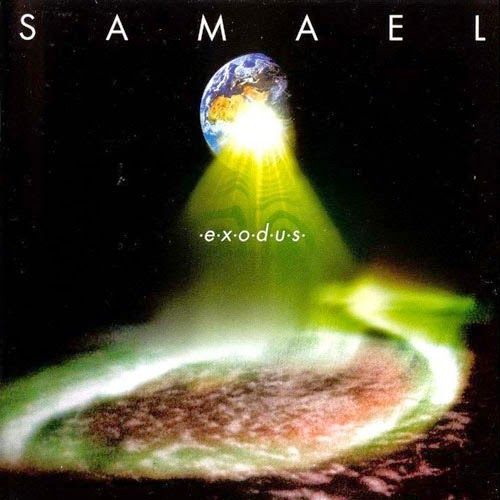 Being that there was next to no possibility of topping Passage (then and forevermore, apparently), Samael did the next best thing by releasing outtakes from those recording sessions as their own short form product to tide the audience over until a real followup could be produced. Exodus arrived to little fanfare and has since not generated any, and it's not hard to tell why: the songs here, while obviously similar to Passage and belonging to that same fertile, lunar creative streak, would have really weakened the album and demoted it from being 100% memorable. That's not to say the stuff here is poorly written or executed, in fact most of the tunes are better than what they'd produce for the Reign of Light album, but they clearly lack the compelling hooks and glorious Xytras orchestration to match their peers.

Half of the material, however, is merely re-recorded and re-configured from the Ceremony of Opposites album, not to mention the Rebellion EP, which is ironic because that release itself also had some re-recordings. Essentially they've tried to clean up "Ceremony of Opposites" and "Son of Earth", "From Malkuth to Kether" and tacked on an instrumental track drawn from the "Static Journey" pieces. So the majority of Exodus is just a retread, and not a particularly necessary or good one. The only value here would come down to the three tracks that might have otherwise ended up on Passage. Of these, the titular "Exodus" has enough strength and originality to its riff-craft that it wouldn't have stunk up the full-length too much, but there are rhythmic cues in there that would have seemed redundant to other cuts like "Rain". Still, the organs sound fine, the rhythm guitars churn along with strong enough, memorable note progressions, and Vorph and the drum programming both deliver with the same strength as their masterpiece.

"Tribes of Cain" is not far behind, creating a warlike pacing to it that once again would have suffered on Passage due to its aesthetic proximity to "Jupiterian Vibe". Again, the guitars are not at all throwaways, and the organ tones really tap into that cosmic, mythic pulse, but it's just not a song which continues to replay itself through my memory time and time again. If I was desperate for an analog to the material I already owned, it would suffice. Lastly, "Winter Solstice"...and you will not be surprised that this is just too similar to another Passage tune to include it, in this case the brilliant "Moonskin" which haunts and delights me to this day. A calmer pace, synthesizer pianos driving much of the action while Vorphalack spews his seductive poetry. The lyrics are quite similar to "Moonskin" but nowhere near as beautiful, and musically it's not even a fraction as memorable. So this all really illustrates why these selections were wisely shelved and not included alongside their betters...until, of course, the EP would later be reissued on Passage itself (bad move) much like Rebellion was joined with Ceremony of Opposites...

If you have that version, well then I apologize, because surely this material tarnishes the perfect progression of that album's track list. Do try to ignore it, but captured in its own environment, this really isn't so bad. The first two songs are far more interesting than the rest, but at least it's not just a shit mCD single like they'd put out for some of their later albums.