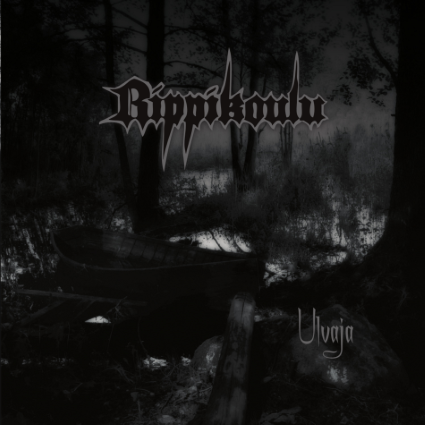 Rippikoulu was (and is) an obscurity which benefited greatly from the gradual identification and gratification of the retro Finnish death metal scene, a phenomena which followed closely on the heels of their neighbor Sweden. The Musta seremonia demo (released back in 1993) has slowly worked its way through the more discriminate internet fanbase and accumulated something of a cult status, though back in the 90s you were very unlikely to have heard of the group unless you were local, or at least pretty goddamn thorough in your tape trading and attention paid to the underground acts hailing from smaller scenes. I can't say I was ever in love with that demo..it's a decent doom/death hybrid considering its origins and the novelty that they were one of the first bands of the style using their native language, but did it resonate with me as much as the debuts of Demilich, Sentenced, Convulse or Demigod?

Nah, but people are so damned obsessed about unearthing raw old bands that sound like other bands they equate their own tastes with, that the tape was a shoe-in for some level of notoriety. And who can blame them? Had the convenience of widespread online communication existed in 1993, the landscape might have looked far different for Rippikoulo, but as it turned out, the band was shelved in '95 after the passing of their guitarist. 21 years later, after most of the other major players in this regional niche have either reformed (or disappeared after many years of success), they now return with a new, three-track EP through Svart Records, a cult-gone-new artifact that I can't imagine is going to shake the faith of their existing followers, but instead possibly swell their ranks to just about any person who appreciates the morbid paradigms of traditional Finnish death metal as filtered through the lens of a quartet of atmospheric doomsayers. That's not to infer that I found this all that compelling in the end, but Ulvaja is nothing if not consistent. Gut wrenching rhythm guitar lines drowned in melancholic, melodic sensibilities and enforced with synthesizers, raucous death growls and a production which surpasses demo fare but still clings to those rough edges...you won't find the castration of studio cleanliness here, just churning cemetery soil and suffering.

I have to  hand it to the Finns for keeping the structure somewhat diverse...the songs range in length so that you can't really accuse them of endless cycles of tedium, though there are points which tried my patience. Ulvaja honestly hovers somewhere between the funeral doom of their countrymen (successors) Shape of Despair, and the ominous death of Convulse or Purtenance, with the caveat that the use of keys, synthetic choirs, and cleaner tones renders them in a marginally more accessible gray area than the ceaseless opaque despair characterized by any of those acts. It's all enormous sounding due to the huge, dingy tones, but rather than feeling subterranean these tunes breathe across moors, where the limitations of visions are the mere vapor of mists. Granted, the raunchiness of the rhythm guitar tone isn't married to any sort of unexpected note placements or progressions, and there is nothing interesting or nuanced about how they approach the style when compared against any of their peers...they don't exactly conjure up the dreary vistas of old Paradise Lost, the lamentations of My Dying Bride, or the crushing emotional grandeur of something like Tiamat's Wildhoney, but this is not a medium in which a lot of innovation occurs these days, so it's more about sufficiency...

Which, at the very least, Rippikoulu exemplifies with this material. The growls are fulsome but not distinct, the guitar lines putrid but pretty as a pale moon, the drums tinny and supportive, and much of the atmosphere created through the 'orchestration'. These songs aren't quite so disgustingly oppressive and crushing as what I remember of the Musta seremonia, which I felt was like a hybrid of Winter and old Godflesh, but neither are they fields of daffodils on a warm afternoon. I felt a little of their weight, but not a lot of their worth, so ultimately I did not come away impressed; however, as a band returning after a two decade absence, they certainly do not come across as incompetent or out of touch with what the prospective audience is going to wish to hear. Will be interesting to see how the fans of the old tape respond to this, though I don't imagine it would provoke much disappointment.