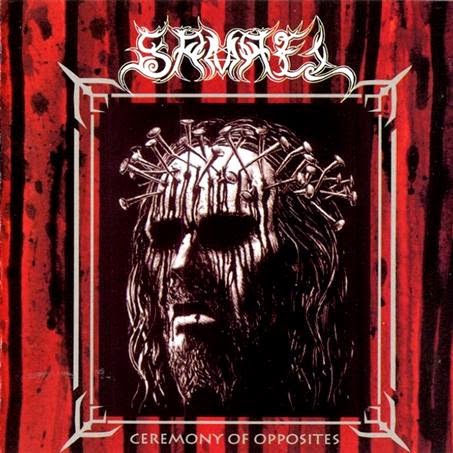 For quite a few folks I know, Ceremony of Opposites is the point at which first contact was made with the music of Samael, and thus it cultivates a level of nostalgia that subsequent recordings might not ever have been able to generate. I can't say I share this sentiment, but it is easily the first album they released upon which the Swiss had truly come up with a distinct sound. It's probably also where a lot of the heretic-burning 'underground or die' pundits also fell off the wagon, for even though the band had been pretty simple up to its manifestation, this was a whole new level of accessibility and base riffing which eschewed any notion of complexity or raw, obscure malevolence. But fuck if this wasn't/isn't unique! In fact, despite a few of the band's own impersonators, and perhaps Therion's more Gothic/death oriented Lepaca Kliffoth, I can't think of much else I've heard over the course of tens of thousands, decades worth of CDs, which is much the same...pieces, perhaps, but not in full.

It's undoubtedly controversial to purists that one might label this 'black metal' at all, but at the core of the experience, that is what manifests; it simply exists as a stark contrast to what many of the band's Scandinavian peers were generating with a shift to tremolo-picked riffing, technicality and speed (Emperor, Immortal, Enslaved, etc). Instead, this is plodding, moderately paced warlike black metal with a lot of grooving hooks and warmer melodic chord progressions, so simplistic that at several points, when first experiencing the album, I wondered why half the riffs hadn't been written before. Here you also get a little more priority placed on the synthesizer elements, which prior had served largely for intros, interludes and instrumentals but would ingrain themselves into one of the most fundamental pieces of the band's sound. Ceremony of Opposites certainly takes its cues from the sophomore Blood Ritual, and you can clearly hear how this serves as a prototype for the albums to follow, but it also really stands on its own as a sort of 'gateway drug' into the band's evolving style, not to mention a swan song for the stricter adherence to occult-based lyrics which dominated the earlier catalog. Not, not my favorite Samael, but as a runner up, it will more than suffice.

Songs trend towards shorter, pop and rock-length structures which maintain a steady procession of new and intriguing content, but at the same time wrap up the record tightly in 36 minutes. Almost are the songs are equally mesmerizing and yet have an interlinked quality about them that generates the same aesthetic of some pompous infernal army marching through a nocturnal battlefield with their chests puffed out, horns polished and sharpened and ghastly standards unfurled. We're still hearing a lot of those base thrash and death metal elements in the chord patterns, but the rhythm guitars just have this memorable flow to them ("Black Trip", "Celebration of the Fourth", etc) which grooves on the conscience. Don't be mistaken, as I mentioned earlier, it does show a further proclivity towards symphonic arrangements, but this is very much a guitar record, because without those unshakeable chords, wrought in a loud, simultaneously blunt and spiked distortion (like a morningstar of post- modernized Hellhammer tone), grinding up against Vorphalack's nihilistic barking, this would fall completely fat. There are a few tunes later on in the track listing where the guitars do seem to revert a little more towards the style of the earlier albums, and these represent the least compelling moments of the experience, but even there they have that chunky predisposition for throwing out a catchy death metal line ("To Our Martyrs" bridge).

The bass playing is also a titanic improvement over Blood Ritual and Worship Him, not because it's more technical or involved, but because of its thick, syrupy texture to it which becomes important in propelling the percussion and forging out its own path; even when the lines are super minimalistic accompaniment for the pulse of the kick drum. The beats in general are exceedingly bare, rock oriented with the added weight of a few double bass patterns and muscular fills, and frankly nothing more intense or busy would really fit this set of tunes, but strangely enough they're not as effective as the programmed stuff on the followup album. Probably because this relies just so heavily on the listener's attention to those guitars, but there are instances like "Baphomet's Throne" where they fit incredibly well with the sampled horns. Most of the synth lines here are actually divided between choirs and horns, so it maintains a marginal nod to the exotic Celtic Frost influence (To Mega Therion). I wouldn't say they were quite as developed as they'd become on the next pair of full length albums, nor as essential, and even mildly 'cheesy' in nature, but it adds just a crucial fraction of atmosphere which rounds Ceremony out as something 'greater' and/or 'deeper' than the debut.

The lyrics, on the other hand, are fucking brilliant when paired up against either of the prior records, with plenty of quotable lines for listeners who can relate to the band's narcissistic mysticism, night sky fascinating and occult devotion. They've saved the best of this for last. Passage does possess a few logical throwbacks to similar themes, but I found that more deeply poetic, personal and broadly appealing in terms of its flow of imagery. At any rate, this and that album represent the pinnacle of the prose, since they'd eventually start penning drivel which came off like they were supposed to be the metal version of the Universal Unitarian Church or some tripe. Here, you can just revel in the evil, the masquerading about in human skin, the blood red seductions and the greater picture of the encroaching endtimes embedded in Samael's collective imagination. "Black Trip", "Flagellation", "Celebration of the Fourth" and "Son of Earth" are all particularly poignant, but not one tune here really lags behind in this regard.

First two albums: great. This one: the first bonafide classic in their repertoire. Tightly balanced between eloquence and barbarity. Simple riffs masquing complicated themes. Hidden beneath every groove, every structure, every rough-shod synthesizer, a Dark Prince leering at the listener. Hail the Goddamn Devil. Roil with the Flesh and Earth. One last time, before the call of the Cosmos.