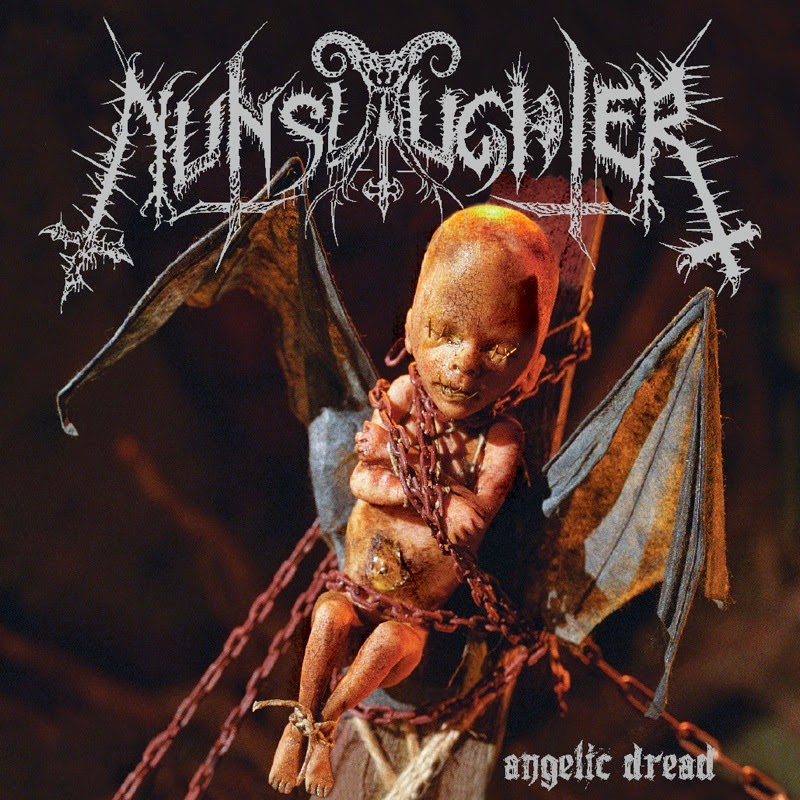 Long a staple of the American underground, and essentially our alternative to the great Sabbat of Japan due to their proliferation of releases. Rarely, however, have I heard Nunslaughter go on such a vicious tear through all good taste as on Angelic Dread. A real bitch of a thrasher, heavily focused on a slew of simplistic and punchy riff patterns which, granted, have all more or less been done, but in the capable hands of these blasphemers seem to take on a renewed vivacity, fleshing out the speed/thrash metal undercurrent with some obvious nods to death metal, punk, and hardcore, sticking to their traditionally conservative, tight song structures which tend to involve 1-2 riffs and hover below the three-minute threshold.

The production on this album sounds lethal and bright, but otherwise pretty bare, with a great, clapping and crashing drum mix that supports the cut muscle of the guitars, which are performed with the grace of a butcher and have this meatiness which, strangely enough, reminds me of the band Vengeance Rising on their first few records (anti- the Christianity), and possibly also a little of Sweden's Witchery before they became boring. Don of the Dead's vocals are the fucking flagship here, gnarled rasps which are often balanced off with these higher screams which only catalyze the level of excitement coursing through every track. The majority are mid to faster paced in the vein of old Slayer or Possessed, maybe some late 80s Razor, with bass lines largely matching up to the rhythm guitars, but they're also not above throwing in a few doomier grooves as in close of  "Looking in the Abyss". There's also a little overt camp, like the horror voices thrown about in a tune like "The Bog People", which reinforce that this is not a band to take itself quite so seriously.

Overall, there isn't a massive amount of variation in the riffing progressions, and so due to the large track list you've got a good deal of redundancy which might have been better served by stepping a little further out of the safety box. But on the flip side, you can expect a solid 36 minutes of the same incendiary blitz, without many interruptions, sort of how classic thrash discs like Reign in Blood or Violent Restitution maintained that level of pacing straight into legend. Okay...this isn't THAT good, not even close, but it's nice to know some bands still aren't interested in dicking around for the sake of fattening their recordings with a bunch of nonsense. It just wouldn't work within Nunslaughter's medium. Having said that, Angelic Dread is somewhat of a treat, because it includes a second disc loaded with re-recordings of limited press 7" material that most will find difficult or obnoxious to track down. Collectors which want the individual vinyl products might not be so keen on this, but those of us who really only pay attention to their full-length albums are getting an impressive value along with the strong new material...arguably just as good if not better than anything they've put out to date, even if it's written in a more streamlined, sadistic style.