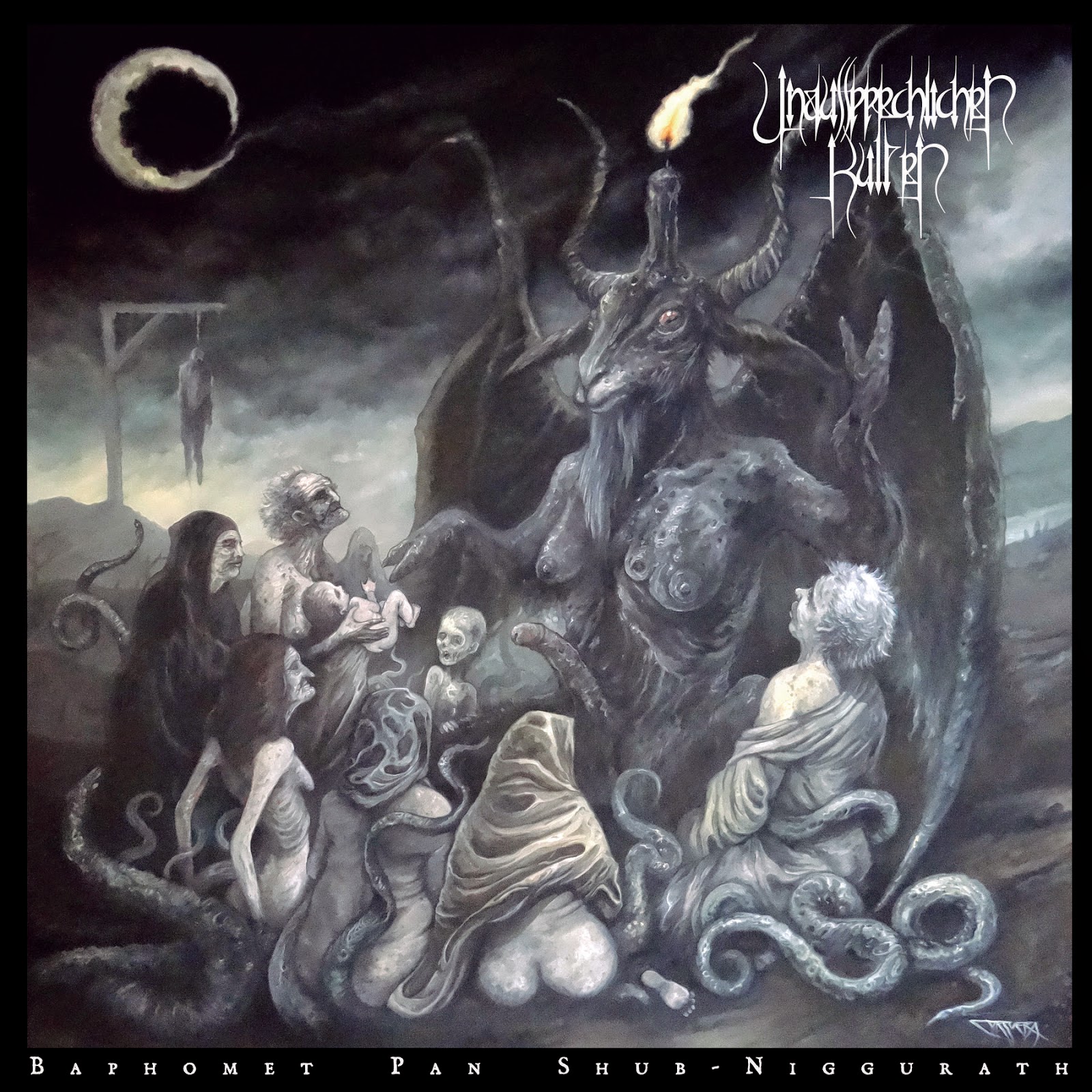 I've run across Santiago's Unaussprechlichen Kulten several times in the past, largely because I appreciated the Lovecraft reference in their name, but then was never quite impressed with the few older samples that I had heard. So when the buzz over this new record Baphomet Pan Shub-Niggurath (reading like the nuptials of some Elder God tryst) popping up on the feeds, and the the gorgeous cover artwork emerged, I grew excited for the promo to turn up. And so it has. And so have the Chileans outdone themselves with what is not only their best written work, but it also avoids the increasing pitfalls of sounding like yet another Incantation or Entombed clone, tried and true, pandering to a crowd which seems sated by the same cavernous, tumultous, compelling-riff-less death metal repeated ad infinitum while the rest of us become increasingly bored out of our skins.

There is quite a lot of glaring 80s and 90s influence here, to be truthful, but this is more like a hybrid of Pestilence's Consuming Impulse, Suffocation's Effigy of the Forgotten, and Finnish cult death circa Demigod, Convulse and Demilich. Clinical, morbid muted riffing patterns are paired up with bold gutturals, atmospheric tremolo picking passages, superbly weird strange lines grooving along to some otherworldly presence, and the drop-of-a-dime ability to burst into primal brutal death phases which seem like a union of Testimony of the Ancients, Pierced from Within and Blessed Are the Sick. That's not to imply that the riffs here are necessarily genius, but they are at least approached with an old school fervor that partially trips up the current trends and does not necessarily shun the progress of death metal throughout the 90s, when it began to border on the soulless tropes of technicality that some have grown to hate (and others to embrace). Baphomet Pan Shub-Niggurath...I'd best not say it three times, lest I invoke the foul entities it celebrates...is not exactly complex by today's standards, but it's constantly busy, throwing a new idea or two at you with each track and never sticking to any one precise riffing medium.

When I heard the first few moments, I had no set idea of what the rest was going to sound like...it's consistent, sure, but there was always some unexpected evil harmony or rhythmic change-up. The only gripe might be that I wasn't in love with the production. It definitely sounded archaic and imbalanced, with the drums coming off a little less thunderous than I'd like, but the guitars rich and raw and flesh rending all the same. Like a reasonably well produced demo for the year 1993, but I'm sure that's going to prove half the charm for those seeking out this style. I can ignore this in the wake that the music is so interesting, but occasionally a few curious guitar parts gets lost beneath the brash weight and force of the rest. Anyway, yeah, this thing functions on a number of levels, a modern day analog for Mallevs Maleficarvm with meatier growls and deeper gutturals, that eschews the studio production levels that would naturally imply. There will obviously be the Incantation/Immolation comparisons, and surely you can hear a bit of that in there (especially the vocals), but the Chileans obsession with their forebears seems to range a little wider than just that, which makes for a tight yet sprawling accumulation of combustible rhythms and orgiastic occultology. Mythospoeia.