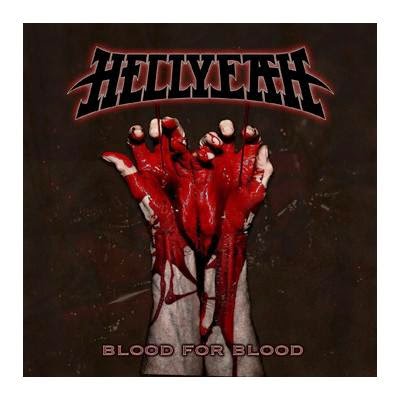 The suck just keeps on sucking. One might presume that by their fourth full-length album, Hellyeah would at least find themselves capable of aping the least of those works they are trying to emulate, which by my count is Pantera's Reinventing the Steel. Sadly (okay, not so sadly) the few spare riffs of worth spent on this material are intertwined with such mediocre groove/thrash/grunge passages and saccharine bullshit tough guy posturing vocals that I often find them impossible to differentiate. There is appreciable meat and force behind a few of the rhythm guitars, I'll grant the Texan all stars that much, but when all your choruses sound like Phil Anselmo attempting to front Alice in Chains and Black Label Society, you're playing to an audience well behind the times, who has yet to realize that such a union sucks and pretty much always will suck outside of the genuine article...

I'll be a little more fair: they bite off more than Pantera here. For instance, "Demons in the Dirt" has a mechanistic rhythmic callback to something you'd hear on Prong's Cleansing, tunes like "Moth" might has well been sent over to Nickelback or Hoobastank to plague the radio channels, and there are even a few clean guitar passages here which sound like something In Flames would have woven into some of their signature melo-death. But it's all so pasteurized, so meek, so 'Ozzfest 1997' that I could not listen through this with a straight face. Once in a while, a riff with some genuine heft will arrive and then quickly become marginalized by the garbage 'catchy' chorus which isn't so catchy, the emotional self-touching of Chad Gray which will no doubt inspire BMX rallies and WWE walk on themes for the next decade. So heavy, bro! That thick, credulous guitar tone recycling groove metal is perfect to pump me up during my next CrossFit training session. Maybe they'll play some of this in between the next Monster Truck session at the muddy local arena-grounds.

Do we still really live in a world where people think shit bands like Stone Sour and Disturbed fucking matter at all? Because if we do, this should go multi-mega platinum! I feel like this is a symptom of musicians remaining well out of reach (err, out of touch) with reality. Look: some trends or styles or distinct individual bands are everlasting. Iron Maiden? Forever. Judas Priest up to 1990? Timeless. Ride the Lightning? Right on. The chum-sucking detritus starving for creativity in the wake of records like Far Beyond Driven and A Vulgar Display of Power will not, and even if Vinnie Paul has more of a right to this obese bucket of swill than anyone else can claim, it doesn't mean he shouldn't leave it for the fishes and do something worth a damn. The guy has the chops here of a glam metal drummer, lazy rock beats with an occasional feat of exertion when they start to get heavier. Okay, there's a little deja-vu in that statement, but we all know he's capable of being a part of something greater than this, and I'm not saying jump back on the Pantera bandwagon, but perhaps start something that is more than the sum of a self-caricature. This is like Five Finger Death Punch (one of the worst bands on Earth), albeit with a few more genuine thrash riffs mixed in. Blood for Blood...you couldn't even come up with a half-decent title. Lone star sharks with blunted teeth.