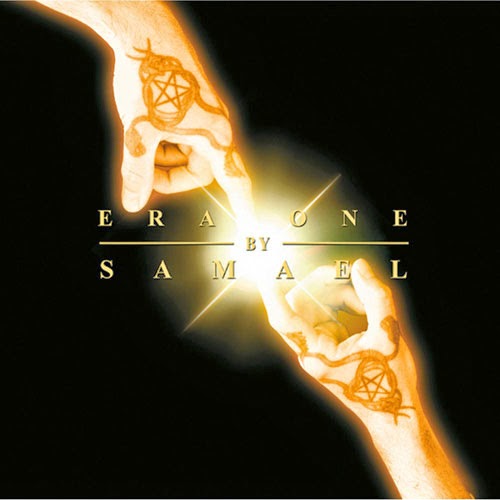 Era One/Lesson in Magick #1 might have come as a surprise to many unaware Samael fans, but it was not wholly unexpected from this sector. One need only peruse some of the various remixes and ambient filler tracks the Swiss had included on their EPs to know they were pretty big fans of electronica and orchestration both, and when you consider the direction the harder material had been taking through Eternal and Reign of Light, then it's hardly coming out of left field that they'd tackle not one, but two full length albums of pure electronica...not entirely EBM, not quite industrial, but sort of a Samael-pop if that makes any sense. But that's not exactly the story, because these albums were pitched a few years before even Reign of Light got out the door, so I smell some degree of contractual filler here, even if Xytras and Vorph were enthusiastic about these being released to their audience in an official capacity. They had, after all, been working on another label and would again for the next heavier disc Solar Soul.

So: two discs, distinct from one another in that the first, Era One, features Vorph's vocals and lyrics, and they're actually pretty good lyrics, far more in depth and interesting than most of what we had to suffer through on Reign of Light. They still fall into that ambiguous, humanist perspective, but the imagery conjured is more complex and compelling than the preachy, let's all hold hands minimalist pap they had been spouting for a few years. Musically, it's throbbing electronic mid-paced stuff which is not unlike Reign of Light sans any of the heavier guitars...they exist here in a cheesy, sampled capacity, but they're nothing more than a chord or harmonic used as percussive backdrop for the lightning rod synthesizer lines. I'd compare it to Theater of Tragedy (Musique, Assembly) without the ethereal, cute female vocals and walls of guitar. Vorph's vocals have a monotonous, dorky consistency to them here not unlike Raymond's lines, robotic and solemn like you'd hear from a bunch of German EBM/New Hardness industrial. It either works ("Night Ride") or does not work ("Universal Soul"), depending on how well the vocals and central pulse figure into the backing ambiance and cosmical electric atmosphere. Oftentimes, when Vorph is trying to sing cleanly in a higher pitch ("Voyage"), it just collapses into hilarity, a mentally challenged version of Tiamat's Johan Edlund in which the pronunciation gets in the way of taking it seriously...

In Summary: ecstasy popping Samael for Euro-ravers, after hours at ski lodges where one employee sneaks his manager's key to let a bunch of freaky friends in. The Samael guys, trying to distance themselves as far as possible from their 80s and 90s legacy of excellence, show up for a few drinks and to look smug and handsome among the younger attendees. Nocturnal Alp clubbing.

The experimentation works FAR BETTER on the second disc, Lesson in Magick #1 which should have been released under the Xytras name. This content moves at a generally consistent pace with the first half of the release, but it's got sweet, throbbing electro bass lines, glimmering cascades of ambient starfall and pulsing arpeggios that convey elegance, machinery and mystique in even measures. Basically it's Xytras doting on his Kraftwerk, Tangerine Dream, Jean Michel Jarre and Vangelis influences and adding a subtext of his considerable talents at beats and orchestration which made records like Passage and Eternal so delightful. A little of The Orb in here, too, and this stuff would make a solid score for a futuristic video game platformer/shooter. I like that there is a good balance of calm and intensity among these tracks. In fact, Lesson in Magick #1 is good enough that I half wish to throw out the first disc so that it doesn't stain the experience when I crack open the CD case...tunes like "Flying High", "Red Unction" and "One With Everything" are simple but well made excursions into that turn of that spiffy, turn of the century FutureVision. I could put this on when I'm playing Android: Netrunner or re-reading Neuromancer for the umpteenth time.

Post-Summary: If you can get this on the cheap, and you love some of the electronica influences I've ascribed to Xytras, then pick it up solely for the second disc. I can't imagine who the first half could appeal to except for some really confused EBM goths whose incursions into metal music go no further than Samael, Moonspell and Nightwish...and stand in denial that the Swiss had fallen off the deep end, not to re-emerge until their hard hitting 'comeback which is not a comeback' Above in the year 2009