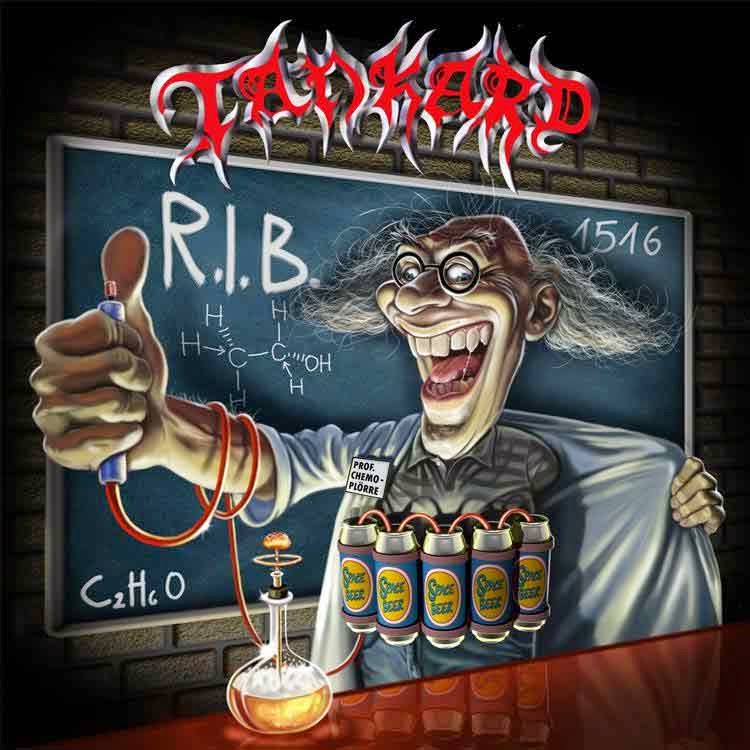 I've probably lost count now of just how many years I've actually been listening to Tankard; it's well over a quarter century with no real signs of ever letting up. They've always been my sole source for genuine alcoholic thrash, impersonated by many but rivaled by none...even a decade before I could legally obtain the sauce. Not only do they still possess the same level of momentum and energy that they've been on since at least the turn of the century, but they're still cranking out good records on a consistent basis. Granted, there is a little fatigue setting in when it comes to how they structure their songs. Riffs and vocals have begun to grow redundant with those off the last half dozen discs (I dub it 'Running Wild syndrome), but they still insert just enough novelty (by their own standards) and fresh inspiration that I gladly buy each and every hops-scented platter they clench down the pipes. And now I apologize for that image.

R.I.B. (Rest in Beer) is not returning to the brilliant, raw liquid diet carnage of the first three discs, and I have long given up hope that they'd bridge back to the filthier production standards of the 80s. Sure, I fantasize that they'll one day unleash their swan song (let's hypothetically title it Reign in Beer, with a grand finale dubbed "Raining Beer"), reduced to 30 minutes or less of that propulsive, energetic, riff-rich environment that characterized masterpieces like The Morning After and Zombie Attack. But R.I.B. is far more like a natural progression from their 2006 effort The Beauty and the Beer, which is for me their greatest record of the 21st century, experimenting with a more melodic hybrid of thrash and heavy/speed metal cognizant of modern production standards. A lot of the emphasis here is on well-structured lead harmonies, mute-dense thrashing patterns which pummel the listener repeatedly thanks to the fat production, and of course, Gerre's absolutely timeless fucking voice. A million beers later, I have no idea how he keeps this up, but honestly if you just dialed back the production level a few decades he sounds almost EXACTLY like he did in the band's late 80s prime...it's almost uncanny. Fellow Teutonic front men (and women) like Mille Petrozza, Sabine Classen and Onkle Tom Angelripper all seem to have mutated their tones for better or worse, while this particular exhibit remains a permanent fixture of the museum, what comes out later at night and breaks all the glass on the other collections by flinging empty bottles at them...

The album threads in a few cleaner guitar passages and bolder, thicker bass-lines to offset the intros to a number of tunes ("War Cry", "R.I.B.", etc) from the consistently muscular thrash found coursing through the majority of the material, but this has really been the case for much modern Tankard, so it doesn't necessarily come off as expansive or innovative within their canon. But that aside, they do try their hands at a few new tricks like a 'choir'. The riffs are far more hits than they are misses, though the majority of them are just later analogs for those they've always written, and even the chorus vocal structures and techniques, like how Gerre raises the pitch and harmonizes himself with all the ballast of an angry soccer hooligan, seem to tread over ground they've already dug up. There is a certain degree of German power metal influence circa Running Wild and Rage which you can find in a few of the picking progressions ("Riders of the Doom", etc), which for me is welcome but not something you might have expected back in the days of Chemical Invasion or "Commandments", where they were all out blistering speed/thrash with a heavier punk influence. Some tunes, like "Hope Can't Die", in fact thrive off being pure melodic heavy metal performed at a moderate pace, a tactic employed pretty often on other recent discs like the last one, A Girl Named Cerveza.

Instruments all sound great here, in particular the aforementioned bass and vocals, but they do wonders to get each sounding like an equal in the mix. Tankard have essentially transformed into the most professional sounding drunks in the industry, a characteristic you might not expect...since a wilder, more frenetic and disheveled production might better suit the subject matter. But of course the Germans don't ONLY sing about beer, much like Running Wild didn't ONLY sing about pirates. Tongue-in-cheek social issues are represented as they always have been, and like a lot of these German thrashers have done (like Destruction or Tankard themselves), there is the slightly irritating self-referential quality where they keep tooting their own horns for having been there since the dawn of the genre. For instance, the R.I.B. cover artwork is clearly a callback to Chemical Invasion, as are some of the lyrics a continuation of that mad professor character (one of their old mascots along with the alcoholic alien). It's become a little annoying in that it feels like these old timers have so little left to say to us rather than repeat themselves. Sequel-itis to a fault. Yet for younger audiences just starting to turn on to these legends, I think it's probably par for the course.

Nitpicks aside, though, R.I.B. is a fun album to listen through. The pacing and riffs are diverse enough to hold the listener through to the 40 minute hangover, and it sounds fucking excellent pouring out of the three pairs of speakers I've thus far played it on. Tankard is a big, fat, ugly, immoveable and goddamn proud rock in this medium, and the kid inside me is so unfailingly beaming to have waved around the flag for them so long (in fact, this is one of the few bands I'm upset to have missed by not attending MDF '14 in Baltimore, but new parenthood calls). That does not mean they cannot write and release better than this... Ultimately, it's a less memorable Beauty and the Beer/A Girl Named Cerveza which still gets its kicks off, but while for that next stage, that next burst of inebriated inspiration, records like this are solid exhibitions of continued commitment and entertainment value, so really there's just not much to complain about, beyond the fact that, like so many of these decades-old metal monarchs, their best efforts remain way back in the rear-view mirror, obfuscated by the dust of maturity.