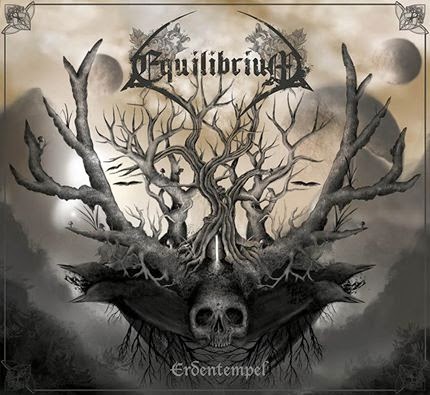 Equilibrium face the same challenges as most of their pagan metal peers, that is that their audience seem just as much comprised of LOTR nerds, LARPERs and big budget fantasy MMO/wargamers who have little interest in metal beyond a handful of bands whose huge and glossed productions and lyrical topics drag them in, as it does of loyal underground headbangers. That said, these Germans have done better than most at keeping the cheese above the belt, the songs ale-frothy and riff-heavy enough to sate those who are just not going to be impressed by the charging horn section synthesizers so critical to their central aesthetics...

They've never written their masterpiece, and it's unlikely they will...the closest was probably their sophomore Sagas 2008 which was convincingly charming in all its belligerent bravado, like flipping through a Game of Thrones paperback and scoring it mentally with the most absurdly overt 'what would this battle scene sound like if Hollywood were all metal, all the time' mentality. But it's fun, fun in that same way you might have enjoyed Ensiferum's output or the first Wintersun. Kinetic, technically competent pagan war metal for dorks (and I am not excepting myself, I liked it). Their other albums have more or less gone for the same fruit on the true, albeit less successfully, so with Erdentempel, I at least hoped they could get back on the horse and play at the level they had half a decade ago. Musically, I feel this is the case, since the guitar progressions here are very involved, spry and semi-complex so that your imagination won't hit a dead end the moment you begin to filter through them.

That said, the band remains heavily centered on the cavalry-charge keyboard-wind tones, which are truly the 'lead' instrument in that they will hit you first, and this right here will continue to make it or break it for those who have been on the fence for their past material. Structurally, this is a step past the last LP Rekreatur in the stickiness of individual guitar patterns, with a lot of tempo variation and melody to compensate for a few of the generic chugging patterns the Germans are still occasionally prone to. There are also, sadly a few pretty generic melodies as in "Waldschrein" of the 'triumphant' variety you'd find in midlist film & television scores or Nightwish songs, glorious and grandiose only on the condition that you've had your ears shut for the last 30 years of symphonic orchestration in media. Yet, like the first Turisas album or its own forebear Sagas, I feel that there's still enough 'fun' here, throughout the superficial alehouse bombast, that you can wrench a smile or two. Especially if you think bands like Korkiplaani or Amon Amarth are the be-all-end-all of extreme metal music, then you'll probably think this is genius...in reality, they put a lot of work into it, but it's not even remotely that clever.

I didn't like the vocals, at least the snarls of Robse (his second full-length in the roster), they seem quite suppressed by the victorious keyboards and sort of cut and paste with a lot of other growlers and snarlers who don't possess a lot of distinctiveness. But apart from that, and the fact that one out of every four series of notes are almost groan-inducing, I didn't have much of a problem with the album, because frankly I did not go into it with high expectations. They do a sort of 'party while jousting on a pony' pagan metal and they do it fairly well. LCD Wagnerian jousting music for 'Renaissance Faires' in North American backwaters. The mix is brightened to modern standards, and there's very little convincing combat grime and filth anywhere, but they do play as if they're on fire and and can't strip their suits of plate mail armor down to the lederhosen beneath quite fast enough. For fans of this niche of bands, that should prove more than enough, because let's face it, sometimes you just wanna pound down your overpriced mug of cheap festival beer while you watch all the cleavage flowing freely from the corsets passing by (or those tight leather breeches, ladies)...and this is the musical equivalent. Hey, asshole: lighten up, peace bond those replica weapons, have a turkey leg, and bring the kids at half-price.