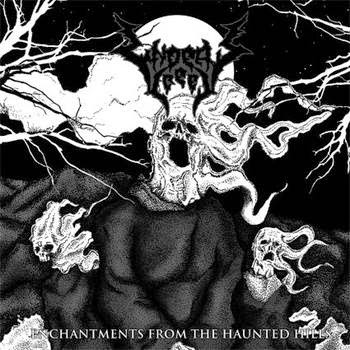 The Ever-Burning Torch was a passable if not formidable entry into the Classic-Swedish-Death-by-Non-Swedes rat race, a competition that had spilled beyond the source borders and then back across them due to constant recycling and osmosis as thousands of modern musicians chased the ghosts of their forebears. Like it's some sort of personal achievement to make a record which sounds just like the ones you grew up with. Yeah, we've all been there, but at least a few of us went so far as to pay homage to an amalgamation of acts which inspired us, rather than just one or two. And I'm fine with that, but let's be honest here, the vast majority of the groups writing and performing in this style don't sound all that much like Grave, or Unleashed, or Grotesque, or Carnage, or even Dismember. They sound like fucking Nihilist and Entombed...it all comes back to that.

Italy's Undead Creep, ironically, can justly claim that they do in fact pay some tribute to a number of other older death metal bands, including many that I just listed, because while they probably take their foremost influence from the usual suspects, there is a particular crudeness and ugliness about their music which thrives between the Floridian and Swedish titans. The rhythm guitar tone is loud and abrasive, but somewhat 'cheaper' sounding than a lot of the big budget Left Hand Trailblazers. It's like the fatter, pugnacious, broken-nosed twit brother of the more traditionally grim graveyard keeper, with churning, chewy, oblique tremolo picked riffs that channel bands like Death, Cadaver, Carnage, Grave and Obituary just as much as they do Clandestine. The riffs are deeper and more turbulent than L-G Petrov, with a little reverb on them to carry them through the dungeon din, and when the band slows to a groovier section it almost explodes into a shower of bloody steak sauce, since the guitars are so blubbery ripe to bursting. They also try their hands at primitive death/doom melodies, like in the second, titular cut, but they feel rather sincere when plugged into the obese bass lines and soiled rhythm guitars.

It's not impressive stuff, because not only does it lack in creativity, but it simply doesn't excel beyond the forerunners of the style in any possible department except that it benefited from production values over a decade into the 21st century. Drums, vocals, riffs, alright...and nothing more. But I give the Italians a modicum of credit for the fact that they seem to at least be tapping into other veins of the regional medium than merely the typical Entombed xerox redux, and they've got no aversion to writing songs that are just dumb, ugly fun steeped in the mysticism of a ouija board session or late night D&D adventure. More focus needs to go to making riffs that stand out, and they could also ramp up their atmospherics & leads for a more rounded and memorable experience. They've gotten a new, female vocalist since this EP, so we shall hear where they take all this.