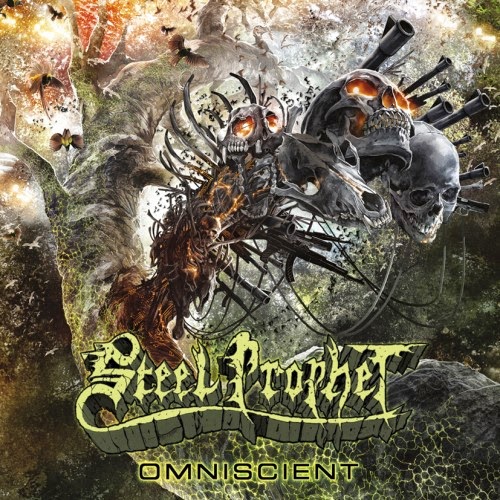 Within the first few moments of Steel Prophet's first full-length studio effort after the hiatus of a decade, they make it abundantly clear that this thing is going to be glazed over with lavish little harmonies and a metric ton of dynamic punch in support of Rick Mythiasin's thin but commanding vocal presence. In fact, having had such mixed feelings about so many of their past works, I'll say that I've never been so impressed with one of their openers, but that initial reaction becomes someone diluted by the following tunes, in which a lot of the riffs feel somewhat more commonplace as they flirt with typical power metal charge territory. However, that's not to say they really disappoint, and the sometimes science fictional themes and progressive veins coursing through the disc are more than adequate to keep it interesting, even if it's constituent components aren't really anything new to the USPM scene...

In fact, I'd liken this quite a lot to the past few Pharaoh records (Be Gone in particular), or the last handful of Jag Panzer outings, only the melodic guitar riffing isn't nearly so memorable, and the vocal strength really only rivals Tim or Tyrant when Rick hits his higher pitches (a range in which he's far more impressive than normal). This is really one of their busier efforts, with tunes like "Chariots of the Gods" packed with mute picked action and loads of percussive fills that keep it crashing forward like an alien fleet en route to take out the Earth. They certainly wear their influences on their shoulders, those involving a lot of the 80s Metal Blade roster like Fates Warning and Liege Lord, but the intensity level here often rivals the Bruce Hall fronted post-reunion Agent Steel records, especially when you involve a few of the lyrical themes. Steel's music is not always 'on the attack' though, since they incorporate a lot of sparser prog metal grooves, slower vistas that help chop up the glittering frenzy of their faster edge. These do tend to clash with more pedestrian trad metal passages here, though, like those harbored in the chorus of the goofy "666 is Everywhere (The Heavy Metal Blues)" which is almost embarrassing sitting there smack dab in the center of the record...

Subtle electronic effects and superb drums from James Schultz really help round out the experience, but I still feel a little split on Rick Mythiasin himself. He's often seemed a little inconsistent on the records I've heard, and this isn't much exception. Unless the guy is screaming or straining his pitch, where he excels, he seems pretty average and doesn't give a lot of emotional impact to the music, even though he's putting a lot of effort into harmonizing and shooting his voice all over the place. Beyond that, there are some really cheesy filler tunes on this record, like the happy, Queen-ish "Oleander Deux" or the unnecessary Queen cover ("Bohemian Rhapsody"), neither of which make much of a case for a triumphant Steel Prophet. Better that distractions like these would have been left off the album and shelved for bonus content somewhere else. Also, there are a few instances like the closer "1984 (George Orwell is Rolling in His Grave)", where they move into a noisier, clinical tech thrash direction slightly redolent of Heathen, Paradox, or Toxik and it seems a little out of place compared to most of the other material.

So really it's a case of letting Omniscient run a little too wild with itself, which doesn't do the stronger songwriting justice and leaves me with an impression the band was a bit scatterbrained after so many years as to what they would include on this final product. But if you trimmed off the fat, you'd have a good 6-7 tunes here that are competitive with some of their stronger material they'd released in the past (Book of the Dead, for example). Not enough for an album on the level of Be Gone, Bury the Light or Attacker's phenomenal Giants of Canaan from last year (which blew my head clean off), but enough to proudly proclaim 'Did you miss us?' Whether you answer that question in the affirmative or negative will likely inform your reaction to this return flight. I myself liked it to an extent, partly because I don't hear enough of this music released fresh for the 20teens...but sacrificing 4-5 of the sillier or confused tunes would have gone a long way towards buffering the strength and consistency of the remainder.