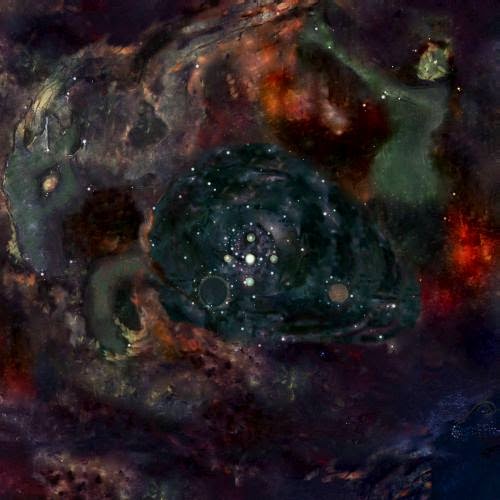 Who ever imagined that the vast and infinite spaces between the bodies celestial would be so full of sludge, saturated with dreamy ambient undercurrents? Well, the answer to that would be Sweden's Ocean Chief, who on their fourth full-length transport us into that void between the glittering lights and then begin to flood that emptiness with anger and frustration. These guys tackle the doom medium with somewhat of a unique instrumentation that involves a keyboard player, and yet he's often so remarkably subtle that his presence is fully flush with the grimy distortion on the guitars. Faint hints of organs, lighter ambient tones swirling into the bitter rage of colostomy chords and gut-fed grunts that present a polar opposition to comfort and kindness, but ensure that Universums härd is a place of subtle contrasts infinitely crushed with the force of a million hammers.

Sounds awesome, right? Well, there is a serious limitation here in that the guitar patterns all just sort of drudge and drone without much individual personality. They work best when paired as a heavily laden harmony with the synth ("Oändlighet"), which gives the music a more funereal aspect, but in general the rhythms are just really raunchy primal sludge with slowly churning notes that are just not so compelling. The drums have a much lighter presence, with the upper range of percussion hitting just as loudly on the ear as the kick drums, and the bass just sort of follows along with the guitar, though it too has this burdensome, loud presence, especially when you hear a chord being strung. To my delight, though, there are some pretty diverse pieces spread in among the typical style, like the "Färden" and "Frihet" instrumentals which are both a little groovy, psychedelic and riffier than some of the more straightforward tunes. Really love the synthesizer lines in the latter, though the lead parts are give or take and rather predictably cast in a bluesy mold with a bit of tremolo picked indulgence. It's just the longer tunes where the guitars can tend to drag, or give you the impression you've just heard their ilk so many times before...and only the keyboard embellishments help to carry them above the potential mediocrity.

Another strength is the vocalist/drummer, Tobias Larsson, who sounds about as pissed off as the lower, grueling stuff by Mastodon, or really anything by Crowbar. He really reaches in there and pulls the demons from his intestines and then vomits them all over the galaxy, and usually this sort of cosmic themed material goes in an opposite direction, so it feels all the fresher due to this choice of tone and style. I also keep mentioning the word 'sludge' here, but Ocean Chief approach it more from the angle of 70s longhairs bred on Sabbath, instead of the 'hip metalcore kids wanting to play something much easier on their instruments' scene which births a lot of today's most popular acts in the niche. This is more like if the band Esoteric had been created 40 years ago with a different singer and not nearly the same level of drugged hypnosis induction during recording sessions. And it's effective enough, I simply wish the guitars were more involved through much of the experience, by which I mean the note choices being more unpredictable and/or unusual. That said, this is apt to turn most smiles upside down, and it's not so dry of ideas in the riffing department that you'll fall asleep.