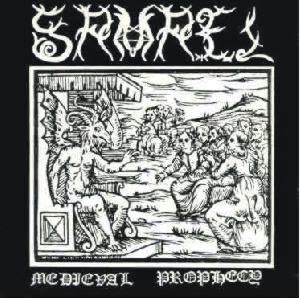 Now this is a tough one, because on the one hand, Medieval Prophecy is the nastiest shit Samael has ever recorded. On the other, the 'shit' unfortunately extends to its production and songwriting values; not that these particular tunes don't lend themselves pretty well to their respective re-recordings (on the debut album), but here in this most primal of forms they are nothing more than a glorified demo which sounds like arse, with just two original tunes and one more that represents their chief influence and countrymen (Hellhammer), but is performed with such primacy that you don't feel all that different than when listening to Tom G. Warrior and crew demo it...

I'm sure there is a stingy minority out there which feels as if this EP is the greatest thing the Swiss have ever recorded, but I'm inclined to disagree based on the fact that the drums sound like shit, the guitars aren't much better, and the only real standout is in hearing Vorphalack spit out the gnarliest conventional black metal rasps of his entire career. As an example of uncompromising, atavistic black metal, Medieval Prophecy has very few peers...Bathory and Deathcrush, but both of those actually exceeded this then-duo's compositional ability by leagues, and where the crude mix might have worked wonders for the Mayhem EP, it actually cripples Samael completely. The chord patterns are already so simplistic and uninvolved that making them sound like two 12 year olds down the block recorded them in one of their dad's sheds just reeks too highly of amateur hour. Yeah, yeah, it's so misanthropic and rebellious and REAL, man...but ultimately just too impetuous and raunchy.

The style here was more or less a prehistoric concoction of black and doom metal with more than a passing nod to Hellhammer/Celtic Frost, only with any of that group's eclectic nature stripped to a primordial, sickening occult core. Chord, rasp, chord, rasp, into damnation. The Satanic, zealous lyrics (of "Into the Pentagram") seem several orders of magnitude more advanced than the musical ability, but that's not saying a whole lot. Riffs have hooks in them, but only the sort that slowly and gradually creep upon you, thanks to how drawn out the first cut feels. It's atmospheric mainly to the extent of its rawness, and how it takes its sweet time getting anywhere, but also there are superficial flourishes due to the cleaner, affected guitars wound through "The Dark". In both cases, I have an infinite preference for the more polished renditions on Worship Him, not only because are given more room to breathe in the less suffocated non-mix, but also because I rather think Vorph has a more distinct and unusual vocal bark there. Medieval Prophecy is sort of charming, at times, but I'm not surprised that the band themselves would take the necessary steps towards professionalism.

Of course, having the original of this 7" provides bragging rights for those concerned with their early bird status in the black metal audience; there's an inherent, collectible nature to the EP, with the black and white artwork on both the original and (superior on the) second pressing, and such releases will always maintain a following who treasure them, but in terms of pure enjoyment, I find this somewhat lacking. It's evil as fuck, sure, but I'd say that was largely by the mistake of the recording sounding so swollen and uneven and not something Vorph and Xytras had really mapped out in advance. Still, you wanna hear a band travel a long way, it's interesting to compare this to their later, industrial infused, life affirming lyrical content. Some will favor the humble roots, but I was always a bigger fan of the band the further they got from Earth...well, not TOO far from Earth, but drifting in close proximity. Hint, hint.

Verdict: Indifference [5.5/10] (paralysed by the anguish of a new day)