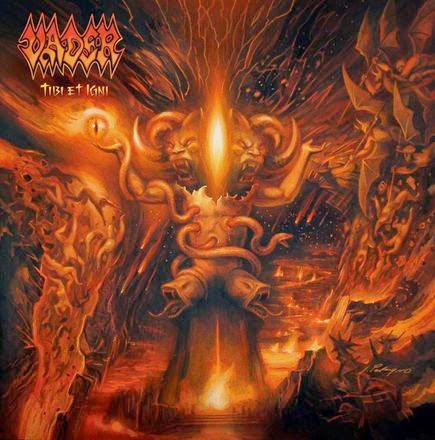 Post-pinnacle album releases are generally among the most difficult to critique, and at least for myself, Welcome to the Morbid Reich has proven the best of Vader's material since formation. That's not to imply I don't love a lot of their older records, quite the opposite, but not only was that album my favorite metal of 2011, it attained this zenith of phenomenal songwriting, menacing atmosphere, rhythm to lead balance, and brutal indifference to arbitrary technicality despite the high level of proficiency pumping through the lifeblood of all the band members. It was as a grand conflagration/conjunction of everything I'd ever appreciated about the Poles, spawned some 20 years or more deep into their career, and a reaffirmation of what it is I so cherish about death metal as a perpetual follower of the form. It was also far more of a true 'death metal' record, at least in mood, as opposed to its own predecessor Necropolis, which clearly favored the death/thrash tag that is so often applied to their output.

Tibi et Igni, long awaited now, even if that's only across the span of three years, potentially deserves its hybrid categorization even more. While a massive Slayer influence is no stranger to the band, never has been, it's boldly flagged across this album alongside compositional cues to Dark Angel, Kreator and other extreme speed/thrash acts of the 90s, in both higher speed tremolo picked hellish 'chase' sequences and the mid-paced headbanging riots that spew forth from tunes like "Triumph of Death". While these were not exactly absent from Welcome..., they're far more obvious, pronounced due to the general punch of the rhythm guitars here, which are still as smooth as the prior works in terms of clarity, but have a bit more of a haughty bluntness to them. That said, this is still threaded with the presence of brief and effective orchestral set-ups as you'd find on its direct predecessor or Impressions in Blood, and the lead work very closely matches the thoughtfulness, restraint and catchy qualities which have maintained Welcome to the Morbid Reich in a monthly, sometimes weekly listening rotation for me years after its birth. So when I say that there's no surprise, Tibi et Igni is another goddamn great Vader album, it really IS no surprise...

For Peter is a master of his craft, THIS craft, and by 2014, deserves the status of 'death metal royalty' far more than many of his better-known American and Swedish peers. He is hands down one of the most competent guitar/vocal dual taskers in his medium, and along with Spider, metes out a strong and varied array of slashers, thrashers, spry bursts hinging on a black metallic efficacy, along with the formidable chugging that performs so flush with Peter's grainy, constipated vocal barks. Once again, we've got some new additions comprising the rhythm section, with Brit James Stewart tackling the coveted drum seat now vacated by Paweł Jaroszewicz, who hard recorded Welcome to the Morbid Reich and is now involved with fellow Polish punishers Hate. Stewart is easily the measure of most of his forebears (though most will retain an emotional attachment to the late Doc), with an ease to his blasting and grooving that fits the breadth of Vader's ambitions, though I think some people might not like the actual mix of the drums as much as earlier efforts. Personally, I found them clear and consistent, but in terms of beats and fill choices he doesn't exactly amplify the record's intensity. I'd say the same for the other new blood, bassist Tomasz 'Hal' Halicki (Abused Majesty, Hermh), whose lines are fat, functional and worthy to support the guitar duo, but not entirely interesting when they're not given some space of their own...and even sometimes when they are.

But, hey, as important as the percussion has always been to Vader's incessant sense of momentum, it's the guitars that have always made or broken their material (far more often the former), and here they blaze within a large margin of success. Tracks like "Hexenvessel" and "Go to Hell" are just stunners, the first for its tasteful weave of atmosphere and taut heavy/death/thrash measures, the second for the brazen heraldry of its intro, and the ensuing, apoplectic carnage. When first hearing that single, I wasn't too fond of it, but it has since grown on me in bounds. As for the rest of the material, there are probably a half dozen riffs which just don't hit me all that hard, partly because they are derivative of others the band has unleashed in the past (a typical complaint against Vader which is not wholly untrue), and also because...yeah, the notes just don't always add up. At other times, though, they'll launch into a slightly unexpected progression that shows they thought this through and made a conscious effort not to take the obvious path in every songwriting decision. As far as its overall strength and capability with me personally, I'd place this somewhat below the last three original studio full-lengths, which resonated with me considerably more.

Welcome to the Morbid Reich was a 'statement', both cyclic and evolutionary, cleverly adapting the title of the band's old demo and thrusting it boldly into the future-now. It was this arching, evil, and expressive triumph. Tibi et Igni, as mighty as its components, seems more like a 'holding down the fort' sort of effort. It works on all tempos, but it feels more brutal and obligatory than so incredibly inspirational as some of its forefathers. I mean it's apples to apples here. I'm biased, to a degree, because there is not a single Vader album I dislike. Even the oft-maligned Revelations or The Beast are discs I break out on occasion, because they are unquestionably the most consistent band in their scene and probably in the entirety of death metal. I doubt they've written anything I'd attribute with a perfect score, but they're often so far up the pantheon that I've built a shrine regardless. Tibi et Igni ('for you and the fire', though my translation is hazy) takes a few measly missteps, like the bonus cover of Das Ich's "Des Satans neue Kleider", which I could have lived without, though I like the original and admire Peter's eclectic tastes as always. A few of the originals could be better, but on the other hand, I'm sure I'll be spinning this through the summer months (at least) and it's got enough arterial spray and memorable meat to it that it mandates a purchase by nearly any Vader or death metal fan.