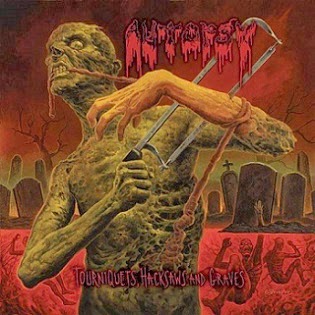 It seems like the further we get into reformation Autopsy, the more the band's records are steadily regressing back to the first material they made their imprint with. So it was with The Headless Ritual, and so too it is with Tourniquets, Hacksaws and Graves, their 7th overall full-length. Not that this is lamentably generic or lacking much personality. Far from it. In fact, this must be a wet dream for those who'd rather not acknowledge the Californians' output beyond 1992 (or most of death metal, for that matter). But those faint traces of dynamic expansion one might have discovered through Macabre Eternal are all but left by the wayside. Tourniquets... is unabashedly retro, though it avails itself the benefits of current studio wizardry for emphasis on its gruesome, atmospheric mix of vocals and instruments, which is most likely my favorite component of this album and the one area in which it exceeds its two predecessors.

Let me be clear: I didn't wet my sheets over this one, and thus I risk no embarrassment the next time my mother changes them over with the laundry. Tourniquets... is a record I dug for a spin or three, but not one I find myself compelled to reach for time and time again. It's not like Autopsy required yet another reaffirmation of all that they had established over two decades past, but this fills that role nicely, full circle, an orouboros of decayed worm-guts, and much of what you like about this will be what you enjoyed about Mental Funeral and Several Survival. There are at least a half dozen riffs on this thing, like the intro to "King of Flesh Ripped", which I thought were genuinely fantastic...and then a whole lot of other ones that weren't, in particular the doomy death stuff, which seems all too bland, predictable and derivative of about a million other riffs I (and perhaps you) have heard ad nauseum through the decades, and don't really evolve beyond that with the possible exception that they're oft smothered with one of the most wretched and memorable vocalists in the genre.

And I mean that! Chris Reifert is all over this mother fucker like a gang of ghouls whetting their appetites on the local hospital children's ward. His post-T.G. Warrior grunts are on the level, raving and barking corpse-starved lunacy all over the guitars, and in addition they've cleverly layered in a number of rasps and gutturals to create this massive, cavernous sense of intimidation. I liked him so much here that it became mildly easier to forgive the fact that half the guitar progressions bored me nearly to tears. There is so much depth and torment to his growls that it quickly renders anything else in the mix almost pointless, because there's just no way to match this unless you are writing some severely evil, catchy shit, which about 70-80% of the time here they are not, just laconic, sluggish doom steps with mild, mournful harmonization, or nostalgic death metal passages where the last note is all but guaranteed once you've heard the first. Other strong points include the springy, loose guitar tone which lends itself to most of the more compelling riff patterns on the disc, and Reifert's drums which are loud, boisterous, organic, with levels you'd just kill to have in a live setting.

There's the usual sense of variation in how mid-paced death grooves are exchanged with a few faster and slovenly tracks, just like the first two albums (and last two albums). I think they pretty expertly know how to fit the pieces of an album together, even when all those pieces are not ultimately equal in quality. For instance, the opener "Savagery" felt pretty tedious and bare-bones despite its concise length, but they really only use it to generate excitement or "King of Flesh Ripped", one of the best individual songs they've written in the reformation era. Slower, atmospheric, horror-driven pieces will capitalize on the listener's desire for a break after some more intense sequence, and there's absolutely a fleshy sense of novelty to a handful of Cutler and Coralles' performance that I wish had carried through to a broader majority of the songwriting. Again, Autopsy holds the sort of underground status that they could literally record an hour of saws cutting through carcasses at a slaughterhouse and people would find some genius in it, but I felt too evenly a balance of the 'impressed' and 'underwhelmed'.

Honestly, there are probably 15 minutes here, 3-4 tunes which in an EP format would be the most effective material they've released since Mental Funeral and Retribution for the Dead in 1991, so it's not exactly a bust even for me. For many others, who consider them the pinnacle of the medium, this will likely make the end-of-year-list rounds with several triumphs assured. I'm just happy that they still have it within them to create some of the ugliest death metal they know how, and there is no sense of fear or hesitation to channel their grisly essence as far over the top as possible, which is evident through Chris' vocals if nothing else. Compare this to, say, that half-assed new Massacre album, and it seems brilliant by contrast, yet I'm still waiting for the Autopsy record that finally impacts me the way these Californians have inspired so many other death mavens. This is not that year, unfortunately, but to be fair, there are enough glints at grotesque genius here that I certainly still can't write off the possibility of it ever happening. It can. I hope it will.