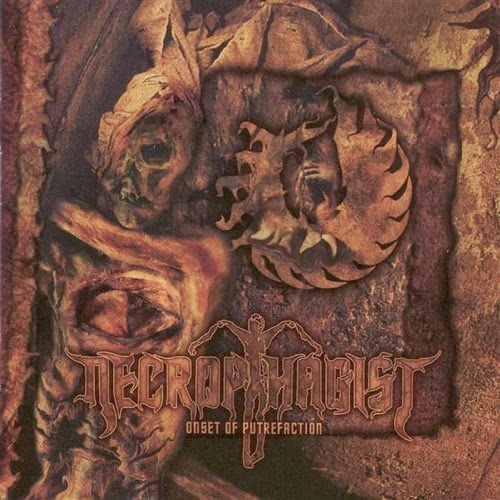 Onset of Putrefaction is an album I am unashamed to cite as one of the most important of the technical death metal medium; only its significance is not necessarily for all the right reasons. An iconic work of frenetic and clinical, unfeeling and technique-driven energy, Muhammed Suiçmez' Necrophagist debut served as a blueprint for the fashionable formulas of mid-list US death metal, which would in turn inspire a number of the more extreme examples of melodic death, metalcore in the later 90s, and later the more instrumentally adept deathcore acts, who were at the time teenagers and pretty impressionable that the high level of technique, or really 'wank' present here was the underlying truth of extreme metal on the whole. Now, I'm not saying I dislike Onset of Putrefaction, as you'll read I still enjoy this from time to time, since it seemed to me the natural extension of surgical death metal masterworks like Mallevs Maleficarvum, Necroticism or those first few Suffocation outings; but there can be no question that much of its proficiency-bound appeal comes at the expense of the genuine malevolence and atmosphere one can associate with the classics of even the most ardently technical death metal.

There really isn't much about this one that I could dub 'original', but it's how Necrophagist assembles its prowess into workable songs that helped it to stand out among a lot of the more boorish, long winded and dissonant death metal of its day. The medical glossary lyrics, common here if not sovereign, are straight lifted from Carcass, the level of alien detachment akin to Demilich (I don't for a second think Muhammed gave a shit about the lyrics or concepts behind the music), and the playing is purely exhibitionist, a bold play to conquer the imaginations of the easily distracted or attention deficient who want their music played. Onset of Putrefaction is essentially technical shred metal festooned in growls and precise, punchy backing chords that moor it in the surgery ward, but why it works is because this particular player is so fantastic at meting out some genuine variation, and transforming what might otherwise be an impenetrably flashy experience into some actual songwriting chops that keep the Guitar World brown-nose nerds proboscis-deep in excrement, while at the same time dazzling the progressive death metal fan who grew increasingly accustomed to tighter production values and musical aesthetics similar to what a computer might come up with if you fed it a few dozen death metal records from the 90s alongside some Yngwie Malmsteen stuff.

That's right, I said it works, because the notes Suiçmez lays out here are endlessly well-executed even if he's not the author of the techniques...he implements a LOT of them, and though there's a general 'sameness' about the tunes, it's largely through the production and lyrical similarities and the hammering thrashiness which could be attributed more to the 'rhythm' guitars. Which are themselves more technically advanced than many of the leads shat out by Necrophagist's peers! Endless strings of arpeggios, sweeps, harmonies and other digitized classical picking styles are fed into a machine of modern aggression, a factory of chops that I promise should not grow boring unless you have an absolute fucking hate-on for everything even tangentially related to the notion of 'technical death metal'. If death metal does not exist for you beyond Mortal Throne of Nazarene, World Without God and Warmaster then this is most definitely not for fucking you! But, you see, I like it, I LIKE that Muhammed pressed upon, if not fully pushed the envelope, well before a lot of followers took the same sounds and diluted them ad nauseum into 'wank of the week'. It still might be partly Necrophagist's fault, but you don't pick your fans. It's not At the Gates' fault that the breakdown in "Slaughter of the Soul" birthed the aspirations of a billion shitty melodeath-metalcore hybrids, and it's not Necrophagist's fault that a bunch of fellow guitar hero nerds couldn't think for themselves.

I'm sure a lot of people had a problem with the drum programming, but really this sort of methodic, fast and emotionless material deserves no less than the most robotic percussion available. It doesn't come across as industrialized, noisy, or experimental, just pretty thin and fast and unobtrusive to what matters most: the guitars. The same could be said for the bass, it slides silkily and stealthily as a support for the hectic rhythm patterns without losing its identity entirely as a 'presence'. The vocals are percussive, coy little growls with a little guttural sustain, but the syllabic patterns being spat forth are once again just a plebeian balance against the acrobatic picking that won't cease once across the 35 minutes. But Muhammed is such a refined player (in terms of technique, not feeling) that nothing else really matters...the appropriate way to approach this is much how you'd approach a Shrapnel shred-fest, for the exhilaration that there are humans out there this damn good at instrumental proficiency, even if your preference is to turn on the radio and listen to another block of The Doors. It's not even remotely a masterpiece, running afoul of perfection due to the fact that its a one trick pony, even though that trick has a thousand variations here.

I used to like this a little more than I do today, but it still holds up; so when you're out there listening to one of the many albums it inspired (one of which is Radiophobia from fellow Germans Cytotoxin, who thoroughly cultivate these sorts of aesthetics), try to remember that one extremely capable person was responsible for overseeing a large chunk of the ensuing genre. Yes, he went there, and he went hard. I can imagine bands like Jason Suecof's Capharnaum hearing this and weeping into their hands, to be so utterly beaten to the proverbial punch. Suiçmez can make you feel pretty bad about your technical chops, if that's what you're chasing, but that doesn't make this album any less entertaining for its pugilistic, unapologetic prowess.